Lake Onega (also known as Onego, Russian: Онежское озеро Onežskoe ozero; Finnish: Ääninen or Äänisjärvi; Karelian: Oniegu or Oniegu-järve; Veps: Änine or Änižjärv) is a lake in the north-west European part of Russia, located on the territory of Republic of Karelia, Leningrad Oblast and Vologda Oblast. It belongs to the basin of Baltic Sea, Atlantic Ocean, and is the second largest lake in Europe after Lake Ladoga. The lake is fed by about 50 rivers and is drained by the Svir River.

There are about 1650 islands on the lake. They include Kizhi, which hosts a historical complex of 89 orthodox wooden churches and other wooden constructions of 15th–20th centuries. The complex includes a UNESCO World Heritage site Kizhi Pogost. Eastern shores of the lake contain about 1200 petroglyphs (rock engravings) dated to 4th–2nd millennia BC. The major cities on the lake are Petrozavodsk, Kondopoga and Medvezhyegorsk.

The lake is of glacial-tectonic origin and is a remnant of a larger body of water which existed in this area during an Ice Age.[1] In geologic terms, the lake is rather young, formed – like almost all lakes in northern Europe – through the carving activity of the inland ice sheets in the latter part of the last Ice Age, about 12,000 years ago: In Paleozoic Era (300–400 million years ago) the entire territory of the modern basin of the lake was covered with a shelf sea lying near the ancient, near-equatoric Baltic continent. Sediments at that time – sandstone, sand, clay and limestone – form a 200-meter thick layer covering the Baltic Shield which consists of granite, gneiss and greenstone. Retreat of the Ice Age glacier formed Littorina Sea. Its level was first 7–9 meters higher than at present, but it gradually lowered, thereby decreasing the sea area and forming several lakes in the Baltic region.[2][3]

Lake Onega has a surface area of 9,700 km² without islands and a volume of 280 km³; its length is about 245 km and width about 90 km. It is the second largest lake in Europe, and the 18th largest lake by area in the world. Its southern banks are mostly low and continuous, whereas northern banks are rocky and rugged.[4] They contain numerous elongated bays shaping the lake into a giant crayfish. In the northern part lies a large Zaonezhye Peninsula (Russian: Заонежье); south of it, is the Big Klimenetsky (Russian: Большой Клименецкий island. To the west of them lies a deep (deeper than 100 m) Big Onego (Russian: Большое Онего) area with its Kondopozhskaya (Russian: Кондопожская губа, depth up to 78 meters), Ilem-Gorskaya (42 m), Lizhemskoy (82 m) and Unitskoy (44 m) bays. To the south-west of the Big Onega lies Petrozavodsk Onego (Russian: Петрозаводское Онего) with its large Petrozavodsk and small Yalguba and Pinguba bays. To the east of Zaonezhye there is a bay, northern part of which is called Povenetsky Bay and the southern part is Zaonezhsky Bay. There, deep sections alternate with banks and islands which split the bay into several parts. The southernmost part of them, Small Onega, is 40–50 meters deep. All shores there are stony.[1][5]

The water level is stabilized by the Verhnesvirskaya hydropower plant[8] and varies by only 0.9–1.5 meters over the year. It rises due to the spring flood which lasts 1.5–2 months. The highest water level is in June–August and the lowest is in March–April. Rivers bring 15.6 km³ of water per year to the lake, that is up to 74% of the water balance; the rest is provided by precipitation. Most of the lake water (84% or 17.6 km³/year) outflows via a single River Svir, and the remaining 16% evaporates from the lake surface.[6] There were frequent storms more characteristic of a sea than a lake; waves of 2–3 meters are not uncommon and may even reach 5 meters.[9] The lake freezes near the coast and bays in late November–December and around mid-January in its center. Sawing starts in April in the tributaries and reaches the lake in May.[1] Water in the deep parts is clear, with the visibility up to 7–8 m. In the bays, the visibility may decrease to about a meter. The water is fresh, with the salt content of 35 mg/L. This is relatively low for a lake and is about 1.5 times lower than in another large lake of the area, Ladoga Lake.[9] Maximal surface water temperature is 20–24 °С on the lake and even 24–27 °С in bays. The deep waters are much colder, from 2–2.5 °С in winter to 4–6 °С in summer.[8] Weather is relatively cold, with temperatures below 0 °C for half of the year and average summer temperatures about 16 °C.[9]

The catchment area of 51,540 km² drains into the lake via 58 rivers and more than 110 tributaries, including the Shuya, Suna, Vodla, Vytegra and Andoma. The only outgoing River Svir, which marks the southern boundary of Karelia, runs from the southwestern shore of Lake Onega to Lake Ladoga and continues as the Neva River to the Gulf of Finland.

The White Sea – Baltic Canal runs through the lake from the White Sea to the Baltic Sea. The Volga–Baltic Waterway connects Onega Lake with the Volga River, Caspian Sea and Black Sea. The Onega Canal, which follows the southern banks of the lake, was built in 1818–1820 and 1845–1852 between Vytegra River in the east and Svir River in the west.[9] The canal was part of the Mariinsk Canal System, a forerunner of the Volga-Baltic Waterway, and aimed to create a quiet pass for boats avoiding the stormy waters of the lake. It is around 50 meters wide, and lies between 10 meters and 2 km from the shores of the lake. The canal is not used for active navigation at present.[9]

There are about 1650 islands in the lake with the total area of about 250 km².[1][8] Whereas the most famous is Kizhi, which contains historical wooden churches of the 18th century, the largest island is Big Klimenetsky with the area of 147 km². It contains a few settlements, a school and an 82-meter tall hill. Other large islands are Big Lelikovsky and Suysari.[4]

The lake banks are low and are flooded with raising water level. They are therefore swampy and are rich in reed, hosting ducks, geese and swans. The coastal region is covered with dense virgin forests.[10] Major tree types are coniferous, but also common are lime (linden), elm and European Alder. Common mammals include elk, brown bear, wolf, fox, hare, squirrel, lynx, pine marten, European badger, as well as American muskrat and mink which were introduced to the area in the early 20th century. About 200 bird species from 15 families have been observed in the lake basin.[9][11][12]

Whereas the area of the lake used to be virgin, the pollution level is gradually increasing, especially in the northwestern and northern parts which contain industrial facilities of Petrozavodsk, Kondopoga and Medvezhyegorsk. About 80% of the population and more than 90% of industry of the basin are concentrated in these areas. The pollution from these three cities amount to about 190 million m³ of sewage and drainage water and 150 tonnes of emissions per year. Human activity results in about 315 million m³ of drain water per year, of which 46% are industrial and household water, 25% is stormwater runoff and 16% is melioration-related drainage. This drainage contains 810 tonnes of phosphorus and 17,000 tonnes of nitrogen; 280 and 11,800 tonnes of these elements are removed through the River Svir whereas the rest accumulates in the lake. Ships and motor boats (about 8000 units) bring oil pollution at the level of about 830 tonnes per navigation year, as well as phenols (0.5 tonnes), lead (0.1 tonnes) and oxides of sulfur, nitrogen, and carbon.[14]

The lake basin is a major source of granite, marble and black schist in Russia which have been exploited in the area since the early 18th century.[9] Also advanced is metallurgy,, especially in the Petrozavodsk area which produces about 25% of industrial products of Karelia.[15] Water level of the lake is controlled by the Nizhnesvirskaya (Russian: Нижнесвирская ГЭС, "Lower-Svir") and Verzhnesvirskaya (Russian: Верхнесвирская ГЭС, "Upper-Svir") hydroelectric power plants. The former was built between 1927 and 1938 and has a peak power of 99 MW. The construction of Verzhnesvirskaya plant started in 1938, but was interrupted by World War II and could only be resumed in 1947. The plant was completed in 1952 and provided 160 MW of electric power.[16] The associated with the plant Verzhnesvirsk Reservoir has an area of 9930 km² and volume of 260 km³, i.e. almost the same as those of Onega Lake. Its construction raised the water level of the lake by 0.5 m.[17]

The lake contains a well-developed navigation system which is part of the Volga–Baltic Waterway and White Sea – Baltic Canal, connecting the basins of Baltic, Caspian and the northern seas. These canals allow water transport of goods from the lake to the countries from Germany to Iran; most traffic goes to Finland, Sweden, Germany and Denmark.[8] The Onega Canal running along the southern shore of the lake there is not used at present.[1] Cargo on Lake Onega amounts to 10–12 million tonnes per year with about 10,300 ship voyages.[14] Lake shores contain two ports (Petrozavodsk and Medvezhyegorsk), 5 wharfs (Kondopoga, Povenets, Shala, Vytegra and Ascension (Russian: Вознесенье)) and 41 piers.[5]

Sailing is a popular activity on the lake and there is a sailing club in Petrozavodsk. From 1972, every end of July the lake hosts the largest in Russia regatta ("Russian: Онежская парусная регата") which is the Russian Open Championship in the Russian class of Cruisers Yachts "Open800". The regatta has international status.[22] 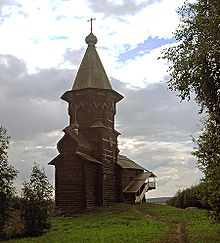 The largest city on the lake is Petrozavodsk – the capital of Republic of Karelia (about 270,000 citizens) founded in 1703 by Peter I to exploit the natural ore deposits.[23] Petrozavodsk area contains a large number of historical monuments, such as Architectural ensemble Round Square (end of 18th century) and gymnasium building of 1790. The embankment of Lake Onega contains a series of sculptures, many of which were presented as gifts from the twin cities.[15][24]

Kondopoga is known from 1495 and contain the Uspenskaya (Assumption) Church built in 1774. This 42-meter tall construction is one of the tallest wooden churches of the Russian North. There are two carillons in the city, with 23 and 18 bells, also there is an indoor ice sports arena accommodating 1850 spectators and a Palace of Arts with an organ.[25]

Medvezhyegorsk city was founded in 1916 and from 1931 became the construction base of the White Sea – Baltic Canal. Between 1703–1710 and 1766–1769 a factory was operating on the site of the city. During the World War II, for three years this area was occupied by the Finnish forces and was a place of busy military activities.[26]

The main attraction of the lake is the island of Kizhi in the northern part of the lake, which is a State Historical, Architectural and Ethnographic Preservation Area. There are 89 wooden architectural monuments of 15th–20th centuries on the island. The most remarkable of those is Kizhi Pogost of the early 18th century which consists of a summer 22-dome church, a winter 9-dome church and a belfry. The pogost was included in the list of UNESCO World Heritage cites in 1990.[27][28] In the summer, there are daily boat connections to the island from Petrozavodsk.

Another attraction of the lake is Onega petroglyphs (rock engravings). They are located on the eastern coast of the lake and date back to 4th–2nd millennia BC. There are about 1200 petroglyphs scattered over the 20 km area including several capes, such as Besov Nos (see map above). The engravings are 1–2 mm deep and depict animals, people, boats and geometrical shapes of circular and crescent shapes.[29]

Many other historical monuments are scattered around the lake. They include Svyat-Uspensky monastery on the cape of Murom, on the eastern shore of the lake. The monastery was founded in 1350, closed in 1918 and restored in 1991.[30]