The Smelt or European smelt (Osmerus eperlanus) is a species of fish in the Osmeridae family.

The body of the European smelt is typically 15 to 18 cm long, slender and slightly flattened on either side. Larger fish may reach 30 cm in length. Smelts have a slightly translucent body. The back and sides are grey-green to pink in colour, the flanks bright silver. The tailfin has a dark border. The smelt lives for up to six years. One characteristic is its intense smell, reminiscent of fresh cucumbers.

The smelt is a sea fish that lives in the coastal waters of Europe from the Baltic Sea to the Bay of Biscay. A freshwater form, known in Germany as the Binnenstint ("Inland smelt"), is common in the larger lakes of Northern Europe.

The smelt gather and swim about in the underflows of large streams in order to spawn above areas of sand. This takes place from the end of February to March, if the water temperature is above 9 degrees Celsius. The egg count per female can be as much as 40,000. After spawning there are often mass deaths. The smelt feeds mainly on small plankton crabs, ground animals and even its own young. 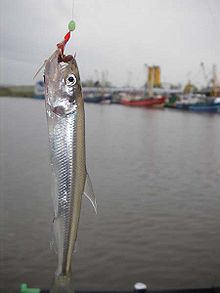 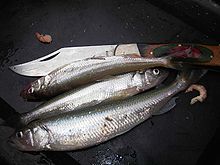 During spawning the smelt can easily be caught with nets. Outside the spawning season in the autumn, smelts are found in the harbours on the Baltic Sea coast, where they can be caught with so-called Heringspaternoster lures.

In earlier times smelt could be caught in great quantities in rivers, and washing baskets were used instead of nets. In Hamburg the district name of Stintfang ("smelt catch") indicates this, and in Lüneburg a row of pubs and restaurants, the Stintmarkt, is named after the fish. In modern times the smelt was of no real significance because it could only be caught in polluted rivers in small quantities and as a result was not in great demand. As the water quality of rivers has improved it can increasingly often be caught in large numbers by smaller fishmongers. Restaurants have especially benefited from the catching and cooking of smelt because the fish is offered as a seasonal speciality. Some of these restaurants have also been successfully run by the smelt fishermen themselves.

Although it is very small, the smelt is prized as food. Its head is usually removed, but the tail and the bones are not because they are very soft. Smelt is generally eaten by hand. The fish is usually fried, although in North Germany it is traditionally rolled in rye flour and then fried in butter with bacon. Typical accompaniments include roast potatoes, potato salad and Apfelmus or apple sauce.

The smelt is also smoked or rolled up and pickled like herring.