Ógra Shinn Féin (Irish pronunciation: [ˈoːɡɾˠə ˈhɪn̪ʲ ˈfʲeːnʲ], Sinn Féin Youth, ÓSF) is the youth wing of the Irish political party Sinn Féin. ÓSF is active and organised throughout Ireland.[3] It is often considered the most prominent incarnation of Fianna Éireann. Upon its establishment in 1997 it was originally known as Sinn Féin Youth, it changed to Ógra Shinn Féin in 1999. A number of Sinn Féin's elected representatives are also members of ÓSF.[4][5] Although it does not publish its membership figures, ÓSF is believed to have about 500 activists. It has also been described as "One of the largest and most active youth wings" in Ireland.[6]

Membership is free and open to anyone aged fifteen to twenty-nine who supports a united Ireland and the establishment of a democratic socialist republic.

Ógra Shinn Féin is organised throughout the 32 counties of Ireland in both local communities and universities.[7] Its structure is similar to that of Sinn Féin. ÓSF cumainn are largely autonomous from local Sinn Féin structures.[8] 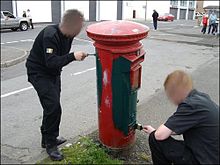 Members of Ógra Shinn Féin in Derry 2008 painting a Royal Mail postbox as part of the Green Post-Box Campaign. 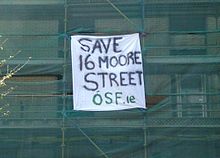 An Ógra Shinn Féin banner drop on O'Connell Street in April 2009, as part of the Save 16 Moore Street campaign

The long-term aim of Ógra Shinn Féin is to establish a thirty-two county democratic socialist republic.[15] Specific issues of primary importance include: Irish unity and independence; workers' rights; the environment; an end to sectarianism and racism in Ireland; decent housing for the people; weekend elections and referendums; education; Shell to Sea,[16] voting age to be lowered to sixteen;[17] and the promotion of the Irish language (Gaeilge).

The following is a list of some campaigns which Ógra Shinn Féin is involved in at the moment:

The Petrol-Bomb logo is still used by the group as seen in this graffito in Donaghmede in Dublin. The continued use of the logo has been criticised by the Young Unionists

Upon the establishment of Sinn Féin Youth, a logo incorporating a petrol bomb, symbolising the militant origins of republican youth organisations, and an Easter lily was adopted. The words 'Sinn Féin Youth', which encircled the logo were changed to 'Ógra Shinn Féin' in 1999 when the name of the organisation was changed.

As part of the transformation of the Republican Movement to reflect changing realities brought about by the peace process a decision was taken to change the logo, and at the 2004 National Congress the green star and orange graffiti-style logo was adopted. The logo again changed at the 2006 Congress when the current logo, incorporating the words 'Ógra Shinn Féin', the Starry Plough, the Sunburst Flag and the "Freedom Lark" was adopted. Ógra Sinn Féin has been criticised by the Young Unionists for failing to remove the petrol bomb logo from a number of its wall murals.[31]

At the Special Congress in 2007 called during the policing debates in Sinn Féin, Ógra Shinn Féin took the controversial step of voting not to support the motion put to the Sinn Féin Special Ard Fheis by the Ard Chomhairle. This was in opposition to the leadership of Sinn Féin. In their motion that was passed at the Special Congress OSF stated: "We will recognise the decision made by the Ard Fheis."

Ógra Shinn Féin has strong connections with a number of pro-independence and socialist groups throughout the world, including: 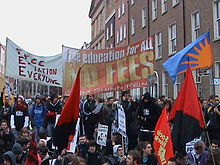 Members of Ógra Shinn Féin (along with SWP and WSM) protesting against the reintroduction of college fees, Dublin, February 2009. Note the use of the sunburst flag, a symbol of Fianna Éireann

Ógra Shinn Féin publishes a quarterly republican youth magazine entitled Spark. The magazine was launched in 2001 eventually ceasing publication around 2006 or so, it was re-launched in 2007, primarily in online format and renamed Splanc, which is the Irish language translation of Spark.[46] ÓSF also publishes a bi-monthly newsletter entitled Glor Na nÓg (Voice of The Youth).[47][48]

ÓSF has published its own book Awaiting the Lark in 2006 to mark the 25th Anniversary of the 1981 Irish hunger strike. The book includes interviews with many well known Irish republicans such as Michelle Gildernew, Barry McElduff, Sean Crowe, Ella O'Dwyer, Seanna Walsh and Martina Anderson. It also includes photographs from the funerals of the hunger strikers and protests that took place around the time. The book also includes information about Michael Gaughan and Frank Stagg who died on hunger strike in 1974 and 1976 respectively.[49][50]

Ógra Shinn Féin frequently attracts media attention or causes controversy due to some of its activities.

Some notable examples include: