The Clywedog reservoir (Welsh: Llyn Clywedog) is a reservoir in the Welsh county of Powys, located off the B4518 road near the town of Llanidloes.

The reservoir was formed by damming the Afon Clywedog, a tributary of the River Severn. Its concrete buttress dam is the tallest concrete dam in the United Kingdom, with a height of 72 metres and a length of 230 metres. 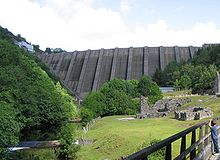 When at capacity the reservoir contains approximately 50,000 megalitres of water. A second, much smaller embankment dam is located at Bwlch-y-gle to prevent overflow into the next valley.

Construction of the dam commenced in 1963 after the passing of an Act of Parliament ordering its creation to help prevent flooding of the River Severn in winter and to maintain its water levels in the summer. Local opposition was strong against the construction of the reservoir as it would result in the flooding of much of the Clywedog valley and the drowning of 615 acres (2.5 km2) of agricultural land. On top of several disruptions and protests, during construction in 1966 a bomb was detonated within the construction site, setting work back by almost 2 months. The political extremist group Mudiad Amddiffyn Cymru (MAC) was widely suspected of carrying out the bombing.

The reservoir was opened in 1967 and till this day has been in continuous usage, generally filling with water over the winter months and gradually releasing it during the summer months. The reservoir is currently owned and operated by Severn Trent Water Limited with oversight and regulation from the Environment Agency.

In a TV ad for the Land Rover Defender, a Defender 90 is seen winching up the face of the dam under its own power.[1]