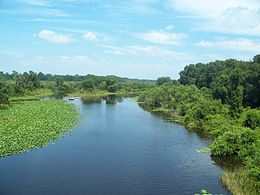 Looking north from the Starkes Ferry bridge on SR 42 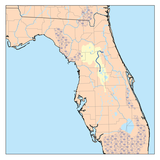 Steamboat on the Ocklawaha c. 1902

The 74-mile-long (119 km)[1] Ocklawaha River flows north from central Florida until it joins the St. Johns River near Palatka. Its name is a corruption of ak-lowahe, Creek for "muddy".[2]

The historical and original source of the Ocklawaha River is Lake Griffin, part of the Harris chain of lakes in Lake County, Florida. The river now receives discharge from the entire Harris Chain of Lakes, including Lake Eustis, Lake Harris, Lake Dora, Lake Beauclair and Lake Apopka, via a series of man-made canals and natural waterways including Haynes Creek, the Dead River, the Dora Canal, and the Apopka-Beauclair Canal. The addition of the man-made canals has increased both the discharge flow and amount of runoff pollution carried into the river. The Ocklawaha River watershed includes parts of the Green Swamp, most of Lake County, and portions of Marion, Alachua and Putnam counties. The largest of several large lakes in the Ocklawaha's watershed is the badly polluted Lake Apopka near Orlando.

The river was used extensively in the 19th century and early 20th century for steamboat transportation, most famously the Hart Line operated by Hubbard L. Hart. Narrow steamboats were used to navigate the constrictive and winding river. In the 1870s, the route between Palatka and Silver Springs became very popular, and was travelled by prominent figures such as Harriet Beecher Stowe, Ulysses S. Grant, Thomas A. Edison and Mary Todd Lincoln to visit Silver Springs. The wild and scenic trip up the river added a sense of adventure to a visit to Silver Springs. The popularity of the river route to Silver Springs declined after the arrival of railroad service to Ocala in 1881.

The river has suffered severe ecological damage in the 20th century from fertilizer runoff, dredging, pollution and rerouting. The river narrowly escaped becoming part of the Cross Florida Barge Canal.

The river is a popular place to canoe, kayak and fish. The river forms the western boundary of the Ocala National Forest. Portions of the river remain mostly undisturbed by man. The natural landscapes and lush wildlife and growth of the outlying area are mostly hydric hammocks and flatwoods, with scrub pine ridges and sugar sandy soils. Wildlife is abundant, including wild turkey, white-tailed deer, and wading birds in this area. Outdoor recreational activities include hunting, fishing, wildlife viewing, hiking, horseback riding, and paddling, although there are few established trails.