The numbered treaties (or Post-Confederation Treaties)[1] are a series of eleven treaties signed between the aboriginal peoples in Canada and the reigning Monarch of Canada (Victoria, Edward VII or George V) from 1871 to 1921.[1] It was the Government of Canada who created the policy, commissioned the Treaty Commissioners and ratified the agreements. These Treaties are agreements with the Government of Canada,[2] administered by Canadian Aboriginal law and overseen by the Minister of Indian Affairs and Northern Development.[3]

The relationship between The Canadian Crown and Aboriginal peoples stretches back to the first interactions between European colonialists and North American indigenous peoples. Over centuries of interaction, treaties were established concerning the monarch and aboriginal tribes. Canada's First Nations, Inuit and Métis peoples have, like the Māori and the Treaty of Waitangi in New Zealand,[4] come to generally view these agreements as being not between them and the ever-changing Cabinet, but instead with the continuous Crown of Canada, as embodied in the reigning sovereign.[5] As an expression of this association, Aboriginal peoples in Canada and members of the British Royal Family will regularly meet to celebrate milestone anniversaries, exchange ceremonial and symbolic gifts, and discuss treaty issues. 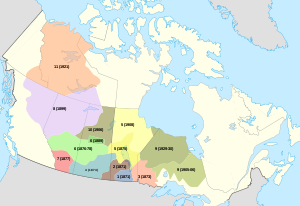 Regions affected by the treaties include portions of what are now Alberta, British Columbia, Manitoba, Ontario, Saskatchewan and the Northwest Territories. When the Dominion of Canada was first formed in 1867 as a confederation of several British North American colonies, most of these regions were part of Rupert's Land and the North-Western Territory and were controlled by the Hudson's Bay Company.

The "National Dream" of Sir John A. Macdonald, the first Prime Minister of Canada, was to create a nation from sea to sea, tied together by the Canadian Pacific Railway. In order to make this dream a reality, the Government of Canada needed to settle the southern portions of Rupert's Land (present day Alberta, Manitoba and Saskatchewan).

In order to obtain title to most of the lands, the Canadian government proceeded with this series of treaties. Each treaty delineates a tract of land which was thought to be the traditional territory of the First Nation or Nations signing that particular treaty (the "tract surrendered"). In exchange for a surrender of their rights and title to these lands, the First Nations were promised a smaller parcel of land as a reserve, annual annuity payments, implements to either farm or hunt and fish and the right to continue to hunt and trap or hunt, trap and fish on the tract surrendered.

First Nations peoples had been decimated by disease outbreaks, the near-extinction of the plains bison, and whiskey traders. They were eager to receive food aid and other assistance from the government. When the government asked for the land in return, they were not in a position to say no. Historians critical of the government have called its actions a "submit or starve" policy.

The plan of settling Europeans in the Canadian west was not free of conflict. Two armed rebellions resulted from this policy: The Red River Rebellion of 1869 and the North West Rebellion of 1885.[6]

The Indian Chiefs Medal, presented to commemorate Treaties 3, 4, 5, 6 and 7, bearing the effigy of Queen Victoria.