Home automation is the residential extension of "building automation". It is automation of the home, housework or household activity. Home automation may include centralized control of lighting, HVAC (heating, ventilation and air conditioning), appliances, and other systems, to provide improved convenience, comfort, energy efficiency and security. Home automation for the elderly and disabled can provide increased quality of life for persons who might otherwise require caregivers or institutional care.

A home automation system integrates electrical devices in a house with each other. The techniques employed in home automation include those in building automation as well as the control of domestic activities, such as home entertainment systems, houseplant and yard watering, pet feeding, changing the ambiance "scenes" for different events (such as dinners or parties), and the use of domestic robots. Devices may be connected through a computer network to allow control by a personal computer, and may allow remote access from the internet. Through the integration of information technologies with the home environment, systems and appliances are able to communicate in an integrated manner which results in convenience, energy efficiency, and safety benefits.

Although automated homes of the future have been staple exhibits for World's Fairs and popular backgrounds in science fiction, complexity, competition between vendors, multiple incompatible standards [1] and the resulting expense have limited the penetration of home automation to homes of the wealthy or ambitious hobbyists. Possibly the first "home computer" was an experimental system in 1966.[2][3]

In modern construction in industrialized nations, homes have been wired for electrical power, telephones, TV outlets (cable or antenna), and a doorbell.

Many household tasks were automated by the development of special appliances. For instance, automatic washing machines were developed to reduce the manual labor of cleaning clothes, and water heaters reduced the labor necessary for bathing.

Other traditional household tasks, like food preservation and preparation have been automated in large extent by moving them into factory settings, with the development of pre-made, pre-packaged foods, and in some countries, such as the United States, increased reliance on commercial food preparation services, such as fast food restaurants. Volume and the factory setting allows forms of automation that would be impractical or too costly in a home setting. Standardized foods enable possible further automation of handling the food within the home.

The use of gaseous or liquid fuels, and later the use of electricity enabled increased automation in heating, reducing the labor necessary to fuel heaters and stoves. Development of thermostats allowed more automated control of heating, and later cooling.

A remote control for moving vessels and vehicles was first patented by Nikola Tesla in 1898.[4]

With the invention of the microcontroller, the cost of electronic control fell rapidly. Remote and intelligent control technologies were adopted by the building services industry and appliance manufacturers worldwide, as they offer the end user easily accessible and/or greater control of their products.

By the late 90's, domotics was commonly used to describe any system in which informatics and telematics were combined to support activities in the home.[7] The phrase appears to be a portmanteau word formed from domus (latin, meaning house) and informatics, and therefore refers specifically to the application of computer and robot technologies to domestic appliances.

As the number of controllable devices in the home rises, interconnection and communication becomes a useful and desirable feature. For example, a furnace can send an alert message when it needs cleaning, or a refrigerator when it needs service. Rooms will become "intelligent" and will send signals to the controller when someone enters. If no one is supposed to be home and the alarm system is set, the system could call the owner, or the neighbors, or an emergency number.

In simple installations this may be as straightforward as turning on the lights when a person enters the room. In advanced installations, rooms can sense not only the presence of a person inside but know who that person is and perhaps set appropriate lighting, temperature, music levels or television channels, taking into account the day of the week, the time of day, and other factors.

Other automated tasks may include setting the air conditioning to an energy saving setting when the house is unoccupied, and restoring the normal setting when an occupant is about to return. More sophisticated systems can maintain an inventory of products, recording their usage through bar codes, or an RFID tag, and prepare a shopping list or even automatically order replacements.

Home automation can also provide a remote interface to home appliances or the automation system itself, via telephone line, wireless transmission or the internet, to provide control and monitoring via a smart phone or web browser.

An example of a remote monitoring in home automation could be when a smoke detector detects a fire or smoke condition, then all lights in the house will blink to alert any occupants of the house to the possible fire. If the house is equipped with a home theatre, a home automation system can shut down all audio and video components to avoid distractions, or make an audible announcement. The system could also call the home owner on their mobile phone to alert them, or call the fire department or alarm monitoring company.

In terms of Lighting Home Automation, it is possible to save energy when installing various products. Simple functions such as motion sensors and detectors integrated into a relatively simple home automation system can save hours of wasted energy in both residential and commercial applications. For example imagine an auto on/off at night time in all major city office blocks, say after 10pm, when no motion is detected, lights shut down, the company could save kilowatts of wasted over night energy.

The elements of a domotics system are:

A centralized controller can be used, or multiple intelligent devices can be distributed around the home.

There have been many attempts to standardise the forms of hardware, electronic and communication interfaces needed to construct a home automation system. Some standards use additional communication and control wiring, some embed signals in the existing power circuit of the house, some use radio frequency (RF) signals, and some use a combination of several methods. Control wiring is hardest to retrofit into an existing house. Some appliances include USB that is used to control it and connect it to a domotics network. Bridges translate information from one standard to another, e.g., from X10 to European Installation Bus.

Besides the upcoming standardisation of home automation hardware, there is also the issue of the control software. In older systems (and some contemporary ones), the control of each home automation system needed to be done separately, and there was thus no central control system. This sometimes led to a great amount of remote controls, one being needed to control each individual part of the system. However, with the new generation of home automation systems, central control can be foreseen. Software such as Fast Track Team Home Personality Software Greeter 1.0 (aka "Cleopatra"),[8] e-Home Automation, ... allows the control to happen from a single computer or television screen, and/or even from a smart phone (e.g. iPhone).[9]

Heating, Ventilation and Air Conditioning (HVAC) solutions include temperature and humidity control. This is generally one of the most important aspects to a homeowner. An Internet-controlled thermostat, for example, can both save money and help the environment, by allowing the homeowner to control the building's heating and air conditioning systems remotely.

Lighting control systems can be used to control household electric lights. Examples include:

This category includes audio and video switching and distribution. Multiple audio or video sources can be selected and distributed to one or more rooms.

Control and integration of security systems.

With Home Automation, the consumer can select and watch cameras live from an Internet source to their home or business. Security cameras can be controlled, allowing the user to observe activity around a house or business right from a Monitor or touch panel. Security systems can include motion sensors that will detect any kind of unauthorized movement and notify the user through the security system or via cell phone.

An intercom system allows communication via a microphone and loud speaker between multiple rooms. Integration of the intercom to the telephone, or of the video door entry system to the television set, allowing the residents to view the door camera automatically.

Journalist Bruno de Latour coined the term domotic in 1984.[10]Domotic has been recently introduced in vocabulary as a composite word of Latin word domus and informatics,[11][12] or a contraction of domestic robotics, and it refers to intelligent houses meaning the use of the automation technologies and computer science applied to the home.

The Spanish Domótica, French Domotique, Italian Domotica, Portuguese Domótica and a number of other words in other languages also derive from Latin word domus and "Robotic...", "Informatic..." or "Automatic...".

Domotics includes completely automated systems that control entertainment, heating, broadband, lighting and security from one of many types of digital computer control devices, panels and mobile handset. Domotics is used to improve the quality of life increasing comfort, security and the same time obtaining costs and energy savings. The term covers a range of applications:[13][14] 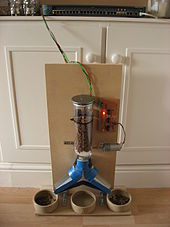 Using special hardware, almost any household appliance can be monitored and controlled automatically or remotely, including: 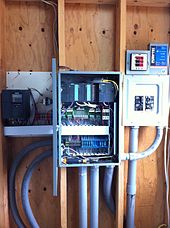 An automated home can be a very simple grouping of controls, or it can be heavily automated where any appliance that is plugged into electrical power is remotely controlled. Costs mainly include equipment, components, furniture, and custom installation.[19]

Learning to use a complex system effectively may take significant time and training.

Control system security may be difficult and costly to maintain, especially if the control system extends beyond the home, for instance by wireless or by connection to the internet or other networks.

Home automation technologies are viewed as integral additions to the Smart grid. The ability to control lighting, appliances, HVAC as well as Smart Grid applications (load shedding, demand response, real-time power usage and price reporting) [20] will become vital as Smart Grid initiatives are rolled out.[citation needed] Green Automation is the term coined to describe energy management strategies in home automation when data from smart grids is combined with home automation systems to use resources either at there cheapest prices or most available. For example taking advantage of high solar panel output in the middle of the day to run washing machines automatically.