The following outline is provided as an overview of and topical guide to geology:

Geology – one of the Earth sciences, it is the study of the Earth, with the general exclusion of present-day life, flow within the ocean, and the atmosphere. The field of geology encompasses the composition, structure, physical properties, and history of Earth's components, and the processes by which they are shaped. Geologists typically study rock, sediment, soil, rivers, and natural resources.

Geology applies primarily to Earth, but can be applied to any planet. 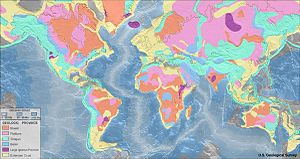 Geologic provinces based on origin:

The Dictionary of Occupational Titles lists the following occupations in Geology, which it describes as "concerned with the investigation of the composition, structure, and physical and biological history of the earth's crust and the application of this knowledge in such fields as archeology, mining, construction, and environmental impact":[1]