Averrhoa bilimbi (commonly known as bilimbi, cucumber tree, or tree sorrel) is a fruit-bearing tree of the genus Averrhoa, family Oxalidaceae. It is a close relative of the carambola.

The tree and fruit are known by different names in different languages.[1] They should not be confused with the carambola, which also share some of the same names despite being very different fruits. For example, bilimbi are called balimbing in Indonesia, but balimbing in the Philippines actually refer to carambola and not bilimbi (which they call iba in Cebuano and kamias in Tagalog).

Possibly originating on the Moluccas, Indonesia, the species is cultivated or found semi-wild throughout Indonesia, The Philippines, Sri Lanka, Bangladesh, Myanmar (Burma) and Malaysia. It is common in other Southeast Asian countries. In India, where it is usually found in gardens, the bilimbi has gone wild in the warmest regions of the country.

Outside of Asia, the tree is cultivated in Zanzibar. In 1793, the bilimbi was introduced to Jamaica from Timor and after several years, was cultivated throughout Central and South America where it is known as mimbro. Introduced to Queensland at the end of the 19th century, it has been grown commercially in the region since that time.

This is essentially a tropical tree, less resistant to cold than the carambola, growing best in rich and well-drained soil (but also stands limestone and sand). It prefers evenly distributed rainfall throughout the year, but with a 2- to 3-month dry season. Therefore the species is not found, for example, in the wettest part of Malaysia. In Florida, where it is an occasional curiosity, the tree needs protection from wind and cold.

The bilimbi tree is long-lived and reaches 5-10 m in height. Its trunk is short & quickly divides up into ramifications. Bilimbi leaves, 3-6 cm long, are alternate, imparipinnate and cluster at branch extremities. There are around 11 to 37 alternate or subopposite oblong leaflets. The leaves are quite similar to those of the Otaheite gooseberry.

There are few cultivated varieties of bilimbi. However, there is a sweet variety in the Philippines - where the sour bilimbis are called "kamias", while the sweet variety is called "balimbing". 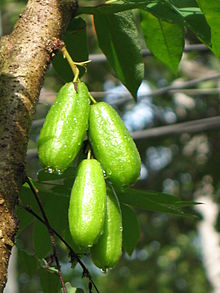 In the rural parts of the Philippines, where it is commonly found as a backyard plant, it is eaten either raw or dipped in rock salt (or other savoury powders - masala), as a snack. It could either be curried or added as flavoring for the common Filipino dish sinigang. The uncooked bilimbi is prepared as relish and served with rice and beans in Costa Rica. In the Far East, where the tree originated, it is sometimes added to curry. Bilimbi juice (with a pH of about 4.47) is made into a cooling beverage. In Indonesia, it is added to some dishes, substituting for tamarind or tomato.

Additionally, the fruit can be preserved by pickling,[2] which reduces its acidity. The flowers are also sometimes preserved in sugar.

In another part of Indonesia, Aceh, it is preserved by sun-drying, the sun-dried bilimbi is called asam sunti. Bilimbi and asam sunti are popular in Acehnese culinary. It can replace mango in making chutney. In Malaysia, it also is made into a rather sweet jam.

In Kerala, India, it is used for making pickles, while around Karnataka, Maharashtra and Goa the fruit is commonly eaten raw with salt and spice.

In the Philippines, the leaves serve as a paste on itches, swelling, rheumatism, mumps or skin eruptions. Elsewhere, they are used for bites of poisonous creatures. A leaf infusion is used as an after-birth tonic, while the flower infusion is used for thrush, cold, and cough. Malaysians use fermented or fresh bilimbi leaves to treat venereal diseases. In French Guiana, syrup made from the fruit is used to treat inflammatory conditions. To date there is no scientific evidence to confirm effectiveness for such uses.

In some villages in the Thiruvananthapuram district of India, the fruit of the bilimbi was used in folk medicine to control obesity. This led to further studies on its antihyperlipidemic properties.[3][4]

In Malaysia, very acidic bilimbis is used to clean the kris blade.[5] In the Philippines, it is often used in rural places as an alternative stain remover.[6]