The Kamboja–Dvaravati Route is the name given in old Jataka literature to an ancient land trade route that was an important branch of the Silk Road during antiquity and the early medieval era. It connected the Kamboja Kingdom in today's Afghanistan and Tajikstan via Pakistan to Dvārakā and other major ports in Gujarat, India, permitting goods from Afghanistan and China to be exported by sea to southern India, Sri Lanka, the Middle East and Ancient Greece and Rome. The road was the second most important ancient caravan route linking India with the nations of the northwest.[1] 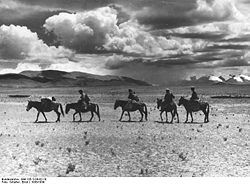 The Kamboja-Dvaravati trade route began at the seaport of Dvaravati. It passed through the Anarta region to Madhyamika, a city near Chittor. South of Aravalli, the road reached the Indus River, where it turned north. At Roruka (modern Rodi), the route split in two: one road turned east and followed the river Sarasvati to Hastinapura and Indraprastha, while the second branch continued north to join the main east-west road (the Uttarapatha Route across northern India from Pataliputra to Bamyan) at Pushkalavati.[2][3][4][5][6].

From Pushkalavati, the Kamboja-Dvaravati and Uttarapatha routes ran together to Bahlika through Kabul and Bamyan. At Bahlika, the road turned east to pass through the Pamir Mountains and Badakshan, finally connecting with the Silk Road to China.[2][5][6][7]

Both the historical record and archaeological evidence show that the ancient kingdoms in the northwest (Gandhāra and Kamboja) had economic and political relations with the western Indian kingdoms (Anarta and Saurashtra) since Pre-Christian times. This commercial intercourse appears to have led to the adoption of similar sociopolitical institutions by both the Kambojas and the Saurashtras.[1][6]

References in both Hindu and Buddhist scriptures mention trading activities of the ancient Kambojas with other nations:

Numerous precious objects discovered in excavations in Afghanistan, at Bamyan, Taxila and Begram, bear evidence to a close trade relationship between the region and ancient Phoenicia and Rome to the west and Sri Lanka to the south.

Because archaeological digs in Gujarat have also found ancient ports, the Kamboja–Dvaravati Route is viewed as the logical corridor for those trade items that reached the sea before traveling on east and west.[12].

The seaport and international trade 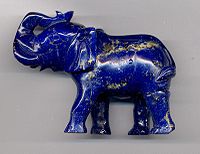 From the port of Dvaravati at the terminus of the Kamboja–Dvaravati Route, traders connected with sea trading routes to exchange goods as far west as Rome and as far east as Kampuchea. Goods shipped at Dvaravati also reached Greece, Egypt, the Arabian Peninsula, southern India, Sri Lanka, Myanmar, the land of Suwannaphum (whose location has still not been determined) and the Indochinese peninsula.

Dvaravati was, however, not the only port at the route's terminus. Perhaps more important was Barygaza or Bharukaccha (modern Bharuch, located on the mainland to the east of the Kathiawar peninsula on the river Narbada.

Horse dealers from north-west Kamboja traded as far as Sri Lanka, and there may have been a trading community of them living in Anuradhapura, possibly along with some Greek traders.[13]. This trade continued for centuries, long after the Kambhojans had converted to Islam in the 9th century CE.[14].

The sea trade from the southern end of the Kamboja–Dvaravati Route to the west is documented in Greek, Buddhist and Jain records:

The commerce of the western Indian coast was lucrative. Bharukacchan and Soparan traders who established settlements or trading posts in the Persian Gulf reaped enormous profits from the Indo-Roman trade and, according to the Vienna Papyrus, written in the mid-2nd century AD, paid high rates of interest.[20] 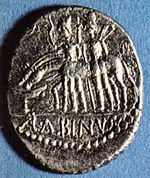 There is good archaeological evidence of Roman trade goods in the first two centuries CE reaching Kamboja and Bactria through the Gujarati peninsula. Archaeologists have found frescoes, stucco decorations and statuary from ancient Phoenicia and Rome in Bamian, Begram and Taxila in Afghanistan.[21].

Goods from Rome on the trade route included frankincense, coral of various colors (particularly red), figured linen from Egypt, wines, decorated silver vessels, gum, stone, opaque glass and Greek or European slave?women. Roman gold coins were also traded and were usually melted into bullion in Afghanistan,, although very little gold came from Rome after 70 CE. In exchange, ships bound for Rome and the west loaded up in Barbaricum/Bharukaccha with lapis lazuli from Badakshan, green turquoise from the Hindu Kush and Chinese silk (mentioned as reaching Barbaricum via Bactria in The Periplus of the Erythraean Sea).[22]

The eastern and southern sea trade from the ports at the southern terminus of the Kamboja–Dvaravati Route is described in Buddhist, Jain and Sri Lankan documents.

Archaeological digs in Sri Lanka have turned up coins, beads and intaglios from Bactria and Afghanistan.[citation needed] A fragment of a Gandhara Buddha statue in schist was recently[dated info] unearthed from the excavations at Jetavanaramaya in Anuradhapura. Other finds in Sri Lanka, such as lapis lazuli of the Badakshan type, connect that island with Kamboja, ancient source of the material.[citation needed]