The David L. Shirk Ranch is a historic ranch located in the Guano Valley of eastern Lake County, Oregon, United States. The ranch was originally homesteaded in 1881. It was purchased by David L. Shirk in 1883. He operated the ranch until 1914. The property was acquired by the United States Government in 1942. The ranch is now administered by the Bureau of Land Management. The remaining historic ranch buildings are listed on the National Register of Historic Places.

The Shirk Ranch is located on Bureau of Land Management property in the remote Guano Valley of southeastern Oregon. The ranch complex is in the Oregon high desert, just south of the Hart Mountain National Antelope Refuge in the northwest corner of the Great Basin region of North America. Native peoples inhabited the area for at least 10,000 years prior to the arrival of European explorers. The Northern Paiutes occupied the area prior to the arrival of European settlers. They had adapted to the high desert environment by living in scattered groups and moving frequently to take advantage of season lakes and migrating game animals.[1][2]

In the first half of the 19th century, the area around the Shirk Ranch was explored by trappers and several military expeditions.[1] In 1865, the United States Army built Old Camp Warner on the southeastern slope of Hart Mountain along upper Guano Creek. However, the post was abandoned within a year.[3] A few years later, the Oregon Central Military Wagon Road was built through the Guano Valley on its way from Eugene, Oregon to Silver City, Idaho. However, that venture was really a scam intended to acquire government land rather than create a viable road. As a result, the "road" was never more than a desert track.[4] There was no permanent settlement in the area until a decade later when cattlemen began to take advantage of the open range in southeastern Oregon for grazing.[1]

The Shirk Ranch property was originally homesteaded by R.A. Turner around 1881 and then sold to William Herron. Shirk bought the ranch from Herron in 1883. When Shirk purchased the land, there were three building on the property, a house and two sheds. There is no record of the size of the property when Shirk bought it, but county tax records show the ranch was 480 acres in 1887.[5]

David L. Shirk was born in Parke County, Indiana in 1844. He was the oldest of nine children. He left home at the age of 22 to travel west. He spent several years working as a cowboy on cattle drives from Texas to southern Idaho. His younger brother William joined him in 1874, and together they moved to Oregon. They both made land claims in the Catlow Valley in what is now Harney County, Oregon.[1][5] 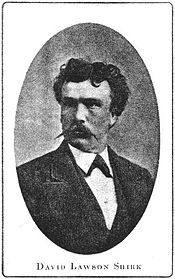 The Catlow Valley was the scene of a number of Indian attacks during the Bannock War of 1878. Both Shirk brothers were engaged in defending their ranch. In one incident, William Shirk and two teamsters were ambushed. His two companions were killed outright and the Indians pursued Shirk for several miles before giving up the chase.[8]

The Shirk brothers eventually acquired about 50,000 acres (200 km2), controlling much of the water in the Catlow Valley. This was quite contentious since the vast P Ranch owned by cattle baron Peter French extended south into the Catlow Valley as well. As result, the Shirks had to compete with French for Catlow Valley grazing land and water. During one skirmish over a land claim in 1889, David Shirk shot and killed one of French's employees. Shirk was tried for murder and acquitted.[5]

After the trial, Shirk moved his home ranch west from the Catlow Valley to his Guano Valley property, probably to help avoid conflict with French and his employees. By 1899, Shirk had increased his Guano Valley parcel to 1,080 acres (4.4 km2). In 1914, Shirk sold his ranch holdings to pursue other business opportunities. Eventually, he moved to Berkeley, California, where he died in 1928.[5][7]

Shirk sold his ranch to the Lake County Land and Livestock Company which owned the neighboring 7T Ranch. This allowed the 7T Ranch to extend its grazing eastward from its home range in the Warner Valley. In 1928, the ranch was bought by a Cedarville, California partnership, Mitchell and McDaniel. However, the property was taken by the Bank of Willows (California) in a foreclosure action that same year. For a number of years, the bank leased the property to Zetus Spaulding, who was married to David Shirk’s daughter, Olive. The United States Government acquired the property in 1942, but Spaulding continued to live at the ranch until his death in 1945. Today, the property is administered by the Bureau of Land Management.[5]

The Shirk Ranch site in the Guano Valley borders an emergent marsh and meadow lands watered by Guano Creek, which drains the southeastern slope of Hart Mountain. The area provides habitat for migrating waterfowl as well as local birds and wildlife. Bureau of Land Management actively manages the cattle grazing leases in the area to preserve the wetland habitat and ensure wildlife diversity around the historic ranch complex.[9]

Because it is an excellent example of a pioneer cattle ranch in southeastern Oregon, the Shirk Ranch was listed on the National Register of Historic Places on November 4, 2009. The historic district covers 14.5 acres (0.059 km2). There are nineteen structures in the historic district. Fourteen are contributing elements and five are non-contributing. Today, the historic Shirk Ranch suffers from benign neglect. The ranch has never been fully inventoried to determine the significance of its assets and none of the buildings have been stabilized or restored. As a result, several of the historic buildings are in poor condition.[1][10]

The Shirk Ranch complex included seven historic buildings and five other contributing structures plus two separate contributing sites, the ranch dump area and a grave. Most of the ranch buildings were constructed during two periods. The first phase was in the early 1880s and then a second surge of building around 1910. The ranch building constructed in the 1880s included the original ranch house (today, only a stone fireplace is left standing), the oldest part of the blacksmith shop, and a small stone-clad shed which has collapsed. Around 1910, Shirk added a number of other buildings. These include the existing main house, two bunkhouses, a barn, a wood shed, a root cellar, an outhouse, a chicken coop/animal shed, a water tower, two wells, original fences, and the hand-dug irrigation system. All of these buildings are wood-frame structures covered either in horizontal weatherboard or vertical wood planking with wood-shingle roofing. All of the buildings were painted at one time. The main house was painted white. All the other buildings were painted red.[1][5] 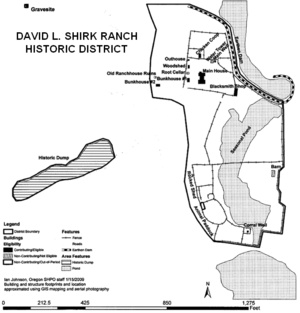 The historic district has fourteen contributing elements. They include the main house, two bunkhouses, a blacksmith shop, a wood shed, an outhouse, a chicken coop/animal shed, a water tower, two wells, original fences, and the hand-dug irrigation system. All of these historic elements are part of the main ranch complex which covers 13.1 acres (0.053 km2). There are two additional contributing elements, a dump area and a grave site, located on two small non-contiguous parcels of land west of the main ranch complex. Together the three sites comprise a 14.5 acres (0.059 km2) historic district.[1]

The remaining historic structures are in such poor condition the Bureau of Land Management listed them as non-contributing elements when the Shirk Ranch site was nominated for the National Register of Historic Places. They include a caved-in root cellar, a collapsed barn, the remains of a rock-clad shed, and an old ranch house ruin.[1]

There is only one non-historic structure on the site, an animal feed lot located at the southern end of the ranch complex. It was built in 1980 for modern ranch operations at the site. While it does not have any historic significance, the Bureau of Land Management has decided not to remove the structure since it is isolated from all of the contributing historic structures.[1]

The Shirk Ranch Historic District is located on Bureau of Land management property in southeastern Oregon. The historic district covers 14.5 acres (0.059 km2). The ranch is in Oregon's high desert county at an elevation of approximately 5,200 feet (1,600 m) above sea level.[1][2][11]