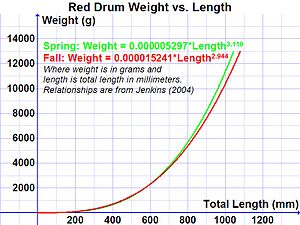 For example, a red drum (Sciaenops ocellatus) caught in the spring in waters off of the Gulf Coast of Louisiana, U.S., is expected to have a weight-length relationship of W = 0.000005297L3.110, where W is the weight in grams and L is the total length in millimeters.[2]

Condition index in fish can be used to make management decisions such as fishing limits in specific areas. For example, Ratz and Lloret (2002) observed that Atlantic cod living in colder waters, such as Greenland, Labrador and Grand Bank, were in poorer condition than cod living in warmer waters such as the North Sea and Irish Sea. They suggest that the warmer waters might be able to support higher fishing rates than the colder waters.[4]

Some have suggested using condition index in living organisms as a bioindicator of the health of other parts of the environment in which it lives. The condition index is basically the relative fatness of the organism, which represents energy reserves, and Stevenson and Woods (2006) suggested that it can be used as an indication of the quality of the habitat and to guide the expectation of how successful reproduction might be.[5] Jenkins (2004) specifically used fish in the Calcasieu Estuary of the Louisiana Gulf Coast to assess possible negative impacts of environmental contaminants.[6] She used condition index as well as biochemical and microscopic measurements.