The ministry is also in charge of the operations of China Railways which manages the railway bureaus and companies in mainland China.

The Ministry of Railways' predecessor was the Qing and Republican Ministry of Posts and Communications.

MOR, which acts as a corporation in the debt market, having sold 60 billion yuan of bonds in 2007.

For the year 2009, MOR plans to sell at least 100 billion yuan ($14.6 billion) worth of construction bonds to finance a large expansion of the country's rail network. 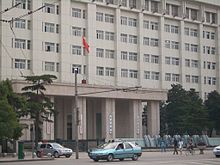