The 1,000 mm (3 ft 3 3⁄8 in) gauge Kunming-Hekou Railway (previously known as Sino-Vietnamese Railway) was built by French colonists between Vietnam and China. It is now inoperative for passengers due to landslides but does have freight services. This railway, opened in 1910, had a 2 ft  (610 mm) gauge branch line from Jijie to Gejiu which operated 0-10-0 tender locos built by Baldwin Locomotive Works.[1] The metre gauge section was originally administered in more or less the same way as the Indochinese networks, and it was physically possible for through trains to be run from Kunming to Singapore, as metre gauge was used in both these countries. During the Japanese occupation Japanese National Railways Class 9600 2-8-0 locomotives were shipped to aid their invasion, and after the completion of the "death railway" it was possible for a time for through traffic to Burma. This is now impossible as sections of this railway have been destroyed during the conflicts since World War II.[1]

In Manchuria, lumber industries built narrow gauge railways into the forests. These used Russian and Japanese locomotives, copied from Soviet or Eastern European designs. Now most of them have disappeared. These railways mostly use a gauge of 2 ft 6 in (762 mm). In many provinces 2 ft 6 in (762 mm) gauge light railways were used for mines and prominently in Henan and Sichuan they were used for rural transportation, ironically most of them were built in an era when most European light railways had started to dwindle in favour of roads. One light railway in Sichuan is being preserved as China's first heritage steam railway.[1]

Metre gauge railways were popular in China in several regions before the 1949 communist revolution. The railway from Shijiazhuang to Taiyuan was opened at the turn of the century. It was French and Belgian controlled, since it was a feeder of the Belgian controlled Peking-Hankow Railway. To minimise costs, it was built to the same 1,000 mm (3 ft 3 3⁄8 in) gauge of the Kunming Hekou Railway, with the hope that the latter could be extended to Shanxi province and so join the two railways, forming a new sphere of influence for the French. Although this did not materialise, as a result, the Railway from Datong to Pukou, opened in 1933, which was funded by the Japanese and controlled by the Shanxi warlord, Yan Xishan, and which connected the Shijiazhuang - Taiyuan Railway at Taiyuan, had to be built to metre gauge as well. While the Shijiazhung - Taiyuan Railway (sometimes known as Zheng Tai Railway) was built to the nature of a light railway and used rolling stock built in France and Belgium, the Datong - Pukou Railway (Tong Pu Railway) used rolling stock built by Japanese companies, even withdrawn old "Japanese National Railways" or "Imperial Taiwan Railway" stock (which is based on the cape gauge Liu Mingchuan's railway' in Qing dynasty). When the Japanese invaded the Shanxi and Hebei provinces during the Sino-Japanese War, these two railways were converted to standard gauge.[1] The one meter gauge Yunnan Burma line was built from 1941 but had to be aborted due to Japanese advances, and has never been completed.

In many rural or suburban areas, metre gauge railways were built to transport agricultural produce. Such was the case of two light railways east of Pudong, Shanghai. They were isolated systems using small tank engines, like 4-4-2Ts. Later, experiments were made with gasoline railcar and trailer sets having Ford engines. They were closed in the 1950s and 1970s respectively and replaced by bus services.[1]

There were several 3 ft 6 in (1,067 mm) gauge military railways in Manchuria during the Russo-Japanese War. These Japanese military railways - which includes a section converted from the 1,520 mm (4 ft 11 5⁄6 in) broad gauge Chinese Eastern Railway - used Japanese National Railways stock and were quickly converted back to standard gauge after the war to facilitate through traffic with the British controlled Peking Mukden Railway, which was standard gauge. As a result the South Manchurian Railway, a creation of the Japanese Kwantung Army, was standard gauge.[1][2] 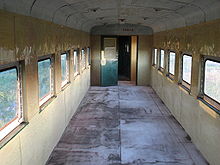 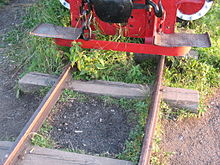 The steam locomotive and the railroad

Xinyi Railway was a 42.5 km–long branch line of the Beijing-Hankou Railway (now the Beijing–Guangzhou railway) located in Hebei. It was built in the winter of 1902 to allow the Empress Dowager Cixi to travel from Beijing to the Western Qing Tombs. Although the railway had no economic benefit, it was the first railway to be financed and built by the Chinese alone.[citation needed]

The empress dowager and the Guangxu Emperor fled to Xi'an in the aftermath of the Boxer Rebellion. After the Boxer Protocol was signed in September 1901, Cixi and the royal family made their way back from Xi'an to Beijing in December, taking a special train along the Lo-Han Railway (now also part of the Beijing–Guangzhou Railway) from Shijiazhuang to Beijing. To atone for the occupation of Beijing by the Eight-Nation Alliance,[citation needed] the Empress first visited the Eastern Qing Tombs in April. Afterward she intended to go to Western Qing Tombs. Because of the distance, she thought of traveling by train. The Empress then ordered Governor[which?] Yuan Shikai to construct a railway from Gaobeidian to Yi County, Hebei, within six months at a cost of tls. 600,000.

The project started in November and was completed by February 1903. The railway used old track and sleepers from the Guanneiwai Railway. On 5 April 1903, the empress and other members of the dynasty rode a special train from the Beijing Yongdingmen along the Beijing-Hankou line, then switching to the new track. The whole length was about 120 km, taking a little over two hours.[citation needed] The Empress was very please with the railway and train and gave the engineer a yellow jacket, flowers, feathers, and the title of prefect.[citation needed]