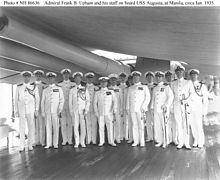 The United States Asiatic Fleet was part of the U.S. Navy. Preceding the World War II era, until 1942, the fleet protected the Philippines.

In 1904, all armored cruisers were withdrawn from the Far East. Gunboats patrolled the Yangtze River in the Yangtze Patrol.

In 1922, when the Atlantic Fleet was dissolved, the Asiatic Fleet was charged with defending the Philippines and Guam and with upholding the Open Door Policy in China.

By mid-1941, Admiral Thomas C. Hart was appointed the commander; the fleet was based at Cavite Naval Base and Olongapo Naval Station, and the headquarters for this unit was at the Marsman Building in Manila. On 22 July, the Mariveles Naval Base was completed and used as well.

Hart had permission to withdraw to the Indian Ocean, in the event of war, at his discretion.

Hart's submarines, commanded by Commander, Submarines, Asiatic Fleet (Captain John E. Wilkes with six elderly "S"-class submarines (and submarine tender Canopus)[1] and seven Porpoises (in Submarine Squadron 5, SubRon 5),[2] In October 1941, 12 Salmons or Sargos—in Captain Stuart "Sunshine" Murray's Submarine Division 15 {SubDiv 15} and Captain Joseph A. Connolly's SubDiv 16, as SubRon 2—accompanied by the tender Holland, were added. Walter E. "Red" Doyle was assigned as Wilkes' relief.[3] Hart's defensive plan relied heavily on his submarines, which were believed to be "the most lethal arm of the insignificant Asiatic Fleet",[4] to interdict the Japanese and whittle down their forces prior to a landing, and to disrupt attempts at reinforcing after the landings took place.[5] When war began, Doyle's inexperience in Asian waters meant Wilkes remained de facto COMSUBAS.[6]

Problems were encountered almost from the beginning. No defensive minefields were laid.[7] Ineffective and unrealistic peace time training, inadequate (or nonexistent) defensive plans, poor deployments, and defective torpedoes combined to make submarine operations in defense of the Philippines a foregone conclusion.[8] No boats were placed in Lingayen Gulf, widely expected to be where the Japanese would land;[9] in the event, several S-boats, aggressively handled, scored successes there.[10] Nor were any boats off ports of Japanese-held Formosa, despite more than a week's warning of impending hostilities.[11] Successes were few in the early days of the war.[12]

Between 1901 and 1937, the United States military maintained a strong presence in China to maintain Far East trade interests and to pursue a permanent alliance with the Chinese Republic, after long diplomatic difficulties with the Chinese Empire. The relationship between the U.S. and China was mostly on-again off-again, with periods of both cordial diplomatic relations accompanied by times of severed relations and violent anti-United States protests.

In the 1920s and 1930s, the Asiatic Fleet was based from China, and a classic image of the "China Sailor" developed, as a large number of U.S. Navy members would remain at postings in China for 10–12 years then retire and continue to live in the country. The classic film The Sand Pebbles is a dramatization on the life of the China Sailors.

With the approach of World War II, the U.S. military in China was slowly withdrawn to protect other U.S. interests in the Pacific. With the rise of Communist China, there was no further U.S. military presence in mainland China, a status which continues to this day.

Early in November 1941, the Navy Department ordered Hart to withdraw the fleet's Marines and gunboats, stationed in China. Five of the gunboats were moved to Manila, Wake was left with a skeleton crew as a radio base and was seized by the Japanese on 8 December and Tutuila was transferred to the Republic of China Navy under Lend-Lease.

The majority of the 4th Marine Regiment was stationed at Shanghai, and other detachments were at Peking (Beijing) and Tientsin (Tianjin). These troops were loaded onto two President class liners on 27-28 November (at either Shanghai or Chinwangtao (Qinghuangdao) and arrived in the Philippines on 30 November-1 December.

President Harrison returned to Chinwangtao, to move the remaining Marines, but was captured by the Japanese on 7 December. Those Marines which had reached the Philippines were tasked with defending the naval stations, particularly Mariveles Naval Base.

Manila and Subic Bays (in support of the Harbor Defenses) were mined by the Asiatic Fleet, stationed in Manila Bay. These minefields were designed to stop all vessels, except for submarines and shallow-draft surface craft.

The Asiatic Fleet and the 16th Naval District possessed:

Also stationed at Cavite Naval Base was the Offshore Patrol.

Aircraft of the Asiatic Fleet — 8 December 1941

The aviation elements of the Asiatic Fleet comprised Patrol Wing 10[14], with two patrol squadrons (VPs or PatRons), a utility unit, and the aviation units aboard the Fleet's two cruisers and the large seaplane tender Langley.

Patrol Wing 10 had been commissioned in December 1940, and included Patrol Squadrons 101 (VP 101) and 102 (VP 102), each equipped with fourteen Consolidated PBY-4 flying boats. By Mid-1941, these 28 PBYs were numbered 1 through 14 for VP 101, 16 through 29 for VP 102. The Utility Unit included Grumman J2F Duck amphibians (1 J2F-2 and 4 J2F-4s), as well as five new OS2U-2 Kingfisher floatplanes, delivered in the late summer. Also, a number of Curtiss SOC Seagull floatplanes were present. Houston carried four, Marblehead two, and Langley two or three, and two more were under repair or in storage at the Aircraft Overhaul Shop (Shop X 34) at Cavite Navy Yard.

As of 8 December, PBYs of Patrol Wing 10 patrolled the northwest and northeast of Luzon daily. These flights were based at either NAS Sangley Point, the Navy's auxiliary seaplane station at Olongapo on Subic Bay, or seaplane tender Childs in Manila Bay. Trios of PBYs rotated down to the southern islands to base on William B. Preston at Malalag Bay on Davao Gulf, Mindanao. These patrols over the Philippine Sea to the east bordered with similar patrols flown by Royal Netherlands Naval Air Service flying boats based in the Netherlands East Indies. Seaplane tender Heron, with a detachment of four OS2U-2s from the Utility Unit, ran morning and evening patrols from Port Ciego, Balabac Island, over the strategically important Balabac Straits from 4-13 December.

Early in the morning of 8 December, Preston dispatched one aircraft on patrol and a short time later was attacked by aircraft from the small Japanese carrier Ryūjō, and her other two PBYs were sunk on the water.

Patrol Wing 10 was ordered south into the Netherlands East Indies on 12 December, when the collapsing defenses of the islands made further operations untenable. Within the first 90 days of the war, Patrol Wing 10 had fallen back to Perth, Western Australia, being reinforced by VP 22 from Hawaii but losing 43 of 45 PBYs—all but four lost to enemy action—together with Langley.

Asiatic Fleet Headquarters, ashore from mid-1941 at the Marsman Building on the Manila waterfront. The Fleet flagship, Houston, was assigned to lead Task Force 5 (TF 5).

The historic Yangtze Patrol was concluded in early December 1941. Of the five remaining gunboats, Tutuila remained at Chungking, Wake was in reduced commission at Shanghai as a radio station for the U.S. State Department, and ComYangPat sailed in Luzon with Oahu for Manila, joined by Mindanao.

As the Japanese sought sources of oil and minerals in the Netherlands East Indies and Borneo immediately following Pearl Harbor, the only fleet available to defend against them was the Asiatic Fleet. Outnumbered, outgunned, outmanned, the U.S. Navy, part of the ABDA (American, British, Dutch and Australian) force was unable to stop the Japanese, and could only attempt to slow them down.

Catching a Japanese invasion fleet of 16 transports, a cruiser and several destroyers anchored in Balikpapan Bay, four old U.S. "four stacker" destroyers—John D. Ford, Pope, Paul Jones and Parrott—attacked at night using torpedoes and gunfire to sink four transports and one patrol craft. The Japanese believed that the attack came from submarines, and sent cruiser and destroyers out to sea in pursuit, leaving the transports unprotected. This was the first surface action of the Pacific War and the first since the Spanish-American War. Although it significantly boosted morale, it had a negligible effect on Japanese operations.[15]

Encouraged by the success of the Balikpapan raid, an attempt was made to break up another invasion when word was received that a Japanese force was planning a landing at Makassar on Celebes Island.

Planning a night attack, the ABDA force had to sail some distance on open water in daylight. It was attacked by Japanese bombers which severely damaged the light cruiser Marblehead and disabled turret #3 on the heavy cruiser Houston. The force retreated to Tjilatjap, Java, having failed to prevent the Japanese landing.

This was the largest battle fought in the area. The ABDA force of five cruisers and 11 destroyers, led by Dutch Admiral Doorman[17] sailed against a Japanese force of seven cruisers and 25 destroyers. The Japanese had air cover, while ABDA did not (nor in any of the other battles described here). It was a rout, fought during the afternoon and evening, a running gun battle with Japanese planes constantly dropping flares to illuminate the ABDA ships. The Dutch lost two cruisers and a destroyer, the British two destroyers. One Japanese destroyer was damaged.[18]

Retreating south to Batavia after the Battle of Java Sea the day before, the U.S. cruiser Houston and the Australian light cruiser HMAS Perth—while heading at high speed for Sunda Strait, between Sumatra and Java—came upon a Japanese invasion force making a landing in Bantam (now Banten) Bay. In a confused night battle, both ships were sunk inside the Bay and not in Sunda Strait as is usually written. The two Allied ships fought bravely, but were overwhelmed by superiour numbers. Four of the Japanese transports were torpedoed, most likely by their own side. The Japanese fired 87 torpedoes in the first half hour of the battle.[19]

Half the U.S. Fleet lost

Of the 40 surface vessels in the Asiatic Fleet on Pearl Harbor Day, 19 were sunk by 5 May 1942, the day General Wainwright surrendered to the Japanese at Corregidor in the Philippines. Most of the surviving ships safely reached Australia.

After the defeats in the defense of the Philippine Commonwealth and the Dutch East Indies, the remaining vessels retreated to Australia. They would fall under the command of the South West Pacific Area which would establish the 7th Fleet in 1943.