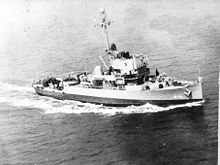 A minesweeper is a small naval warship designed to counter the threat posed by naval mines. Minesweepers generally detect then neutralize mines in advance of other naval operations.

In Britain naval leaders recognized before the outbreak of World War I that the development of sea mines was a threat to the nation's supply and began efforts to counter the threat. Sir Arthur Wilson noted the real threat of the time was blockade aided by mines and not invasion. The function of the fishing fleet's trawlers with their trawl gear was recognized as having a natural connection with mine clearance. A Trawler Section of the Royal Navy Reserve became the predecessor of the mine sweeping forces with specially designed ships and equipment to follow. These reserve Trawler Section fishermen and their trawlers were activated, supplied with mine gear, rifles, uniforms and pay as the first minesweepers.[1] The dedicated, purpose-built minesweeper first appeared during World War I with the Flower-class minesweeping sloop. 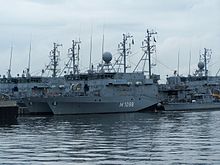 Siegburg, a modern Ensdorf-class minesweeper of the German Navy

Minesweepers are equipped with mechanical or influence sweeps to detonate mines. The modern minesweeper is designed to reduce the chances of it detonating mines itself; it is soundproofed to reduce its acoustic signature and often constructed using wood, glass-reinforced plastic (GRP) or non-ferrous metal, or is degaussed to reduce its magnetic signature.

Mechanical sweeps are devices designed to cut the anchoring cables of moored mines, and preferably attach a tag to help the subsequent localization and neutralization. They are towed behind the minesweeper, and use a towed body (e.g. oropesa, paravane) to maintain the sweep at the desired depth and position. Influence sweeps are equipment, often towed, that emulate a particular ship signature, thereby causing a mine to detonate. The most common such sweeps are magnetic and acoustic generators.

There are two modes of operating an influence sweep: MSM (mine setting mode) and TSM (target simulation mode or target setting mode). MSM sweeping is founded on intelligence on a given type of mine, and produces the output required for detonation of this mine. If such intelligence is unavailable, the TSM sweeping instead reproduces the influence of the friendly ship that is about to transit through the area. TSM sweeping thus clears mines directed at this ship without knowledge of the mines. However, mines directed at other ships might remain.[2] [3]

The minesweeper differs from a minehunter; the minehunter actively detects and neutralises individual mines. Minesweepers are in many cases complementary to minehunters, depending on the operation and the environment; a minesweeper is, in particular, better suited to clearing open-water areas with large numbers of mines. Both kinds of ships are collectively called mine countermeasure vessels (MCMV), a term also applied to a vessel that combines both roles. The first such ship was HMS Wilton, also the first warship to be constructed from glass-reinforced plastic. 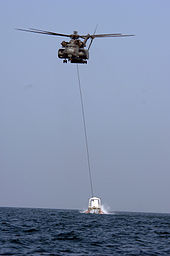 A MH-53E towing the MK105 mine sweeping sled

Aircraft can also be used for minesweeping. During World War II, fifteen British Vickers Wellington bombers were modified to carry a large magnetic induction loop and an electrical generator. The 'Directional Wireless Installation' (DWI), a cover story for the true purpose of the magnetic loop, was used successfully on May 10, 1940 to sweep a path for the escape of the Dutch Royal Family to the UK. The DWI was used most successfully in the Mediterranean theatre, particularly over the Suez Canal and Alexandria Harbour. Their use revealed the limitations of the technique, in that it only works effectively in very shallow water (such as canals and harbours). From about 1943, German Junkers Ju 52 transports were similarly converted. Blohm & Voss BV 138 MS tri-engine flying boats were also used for this purpose.

The MH-53E Sea Dragon helicopter, which tows a minesweeping sled, is used by the United States Navy for minesweeping