Merchant aircraft carriers (MAC) were bulk cargo ships with minimal aircraft handling facilities, used during World War II by Britain and the Netherlands as an interim measure to supplement British and United States-built escort carriers in providing an anti-submarine function for convoys. The original intention had been that they would be an interim measure preceding the wider introduction of escort carriers.[1]

The idea of simple adaptations of bulk cargo ships for aircraft had been considered by the Admiralty for some time. It would provide desperately needed air cover for convoys without losing valuable cargo capacity. There was, however, resistance to the concept arising from several technical issues; the 12 knot speed was considered too slow for aircraft operation, the design and development time was expected to take too long and aircraft movements on steel decks over highly flammable fuel cargoes was considered too dangerous.[1]

The then Director of Merchant Shipbuilding, Sir James Lithgow, made a rough design on the back of an envelope and offered to adapt two ships about to be built at his family's shipyard. This was on condition that "I am not interfered with by the Admiralty". Work started in June 1942 on two grain carriers, Empire MacAlpine and Empire MacAndrew. Ten more were ordered by October and a total of thirty-two were planned (cut back to nineteen with the delivery of escort carriers).[1]

The Merchant Aircraft Carriers were modified bulk grain carriers or tankers built with flight decks and small island structures. Minimal aircraft handling and accommodation facilities were available. The bulk nature of the cargoes did not need deck mounted cargo-handling gear used for general cargoes. The MAC-ships were manned by a Merchant Navy crew, under merchant colours, the Royal Navy provided the air department and the guns were manned by DEMS soldiers. They carried their regular cargo in addition to operating aircraft. Tanker MAC-ships were able to carry about 80 percent of their original cargo, the remaining space being taken for Avgas stowage to Admiralty safety standards. Grain carrier MAC-ships suffered a reduction of about 3,000 tons (or 30 per cent) of the original cargo of grain. Their Fairey Swordfish aircraft carried out anti-submarine patrols around the convoy.[2][3]

The scale of the conversion was small, hence it could be completed in a short time; five months has been quoted as being typical.[1]

The fuel piping arrangements in a tanker made it impossible to build a hangar under the flight deck, so tanker conversions were limited to embarking three Fairey Swordfish which had to be kept on deck. Collapsible deck-edge wind breaks were fitted on the flight deck aft to provide some protection for parked aircraft. The grain carriers had a small hangar aft with a single lift which allowed the carriage of four Swordfish. Flight decks were around 460 feet (140 m) long on the tankers and between 413 and 424 feet for the grain ships, width was 62 feet (19 m) in all cases. All the MAC-ships were fitted with four arrester wires. The permanent deck park of the tanker MAC-ships required a barrier for aircraft recovery. Aircrew accommodation was minimal and ammunition and fuel stores were neither armoured nor partitioned.[3]

Many of the ships were given names with the prefix "Mac-", in a reference to their designation as MACs; the "Empire" prefix was used on ships built by the Ministry of War Transport to distinguish them from pre-war privately owned ships. Since these ships were owned by the Government and only on loan to the shipping companies it was easier to take them out of service for conversion.

The 'Air Party' was the Fleet Air Arm personnel who flew and supported the aircraft, but was under the nominal authority of the merchant ship's commander. It consisted of an Air Staff Officer (Lt-Commander), the aircrew, a doctor, a batsman (landing control officer), ten ship's gunners, four signalmen, and three or four Able Seamen. The Merchant Navy part of the crew might have an extra mate and/or wireless operator but was otherwise unchanged and operated under Merchant Navy conditions.

The aircrew on each ship formed one flight of the MAC-ship Wing which consisted of 836 and 860 Naval Air Squadrons, based at RNAS Maydown, near Derry in Northern Ireland. 836 NAS was manned by the Royal Navy and 860 NAS was manned by Dutch personnel and assigned to the two Dutch MAC-ships.

An informal, illegal benefit for aircrews was their ability to smuggle contraband without paying import duties. Aircraft were flown off to RNAS Maydown laden with goods which were usually unloaded and hidden before HM Customs could intervene.[1] 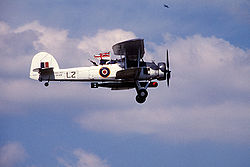 Fairey Swordfish at an airshow in 1988. This aircraft was assigned to 'L' Flight of 836 Squadron on board the MAC ship Rapana during World War II

Two aircraft types were considered for use on MAC ships: the Swordfish and the Vought SB2U Vindicator (known in British service as the "Chesapeake"). Fifty Chesapeakes were delivered, but after a three month trial, they were deemed unsuitable by the Admiralty and relegated to a training role.

However, there is evidence that Sea Hurricanes were deployed aboard MAC ships. The FleetAirArm web site states:

"The Sea Hurricane Mk I were followed by about 300 Mk Is converted to Sea Hurricane Mk IB configuration, these having catapult spools plus a V-frame arrester hook: in addition 25 Mk IIA were modified as Sea Hurricane IB or Hooked Hurricane II fighters. Their initial role was a considerable improvement on CAM-ship deployment, for from October 1941 they began to go to sea aboard MAC-ships, these being large Merchant ships fitted with a small flight deck."

NB. This date of October 1941 is inconsistent with the first MAC ship becoming operational in early 1943, and the same article also says "by 1943 the Sea Hurricane had all but disappeared from service". This is probably the author getting confused between MAC ships and Escort Carriers, a common mistake.

In practice, the MAC ships were successful. The apparently antiquated, but robust, Swordfish aircraft were suited to the conditions and their patrols were very effective. They flew more than 4,000 sorties in all. Wartime records show that no convoy with an accompanying MAC ship ever lost a vessel to U-boats, nor was any MAC ship lost.[1]

Amastra and Ancylus ceased operating Swordfish in late 1944, the empty decks often being used to ferry aircraft from the USA to the UK.[3]