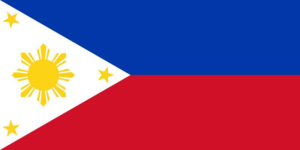 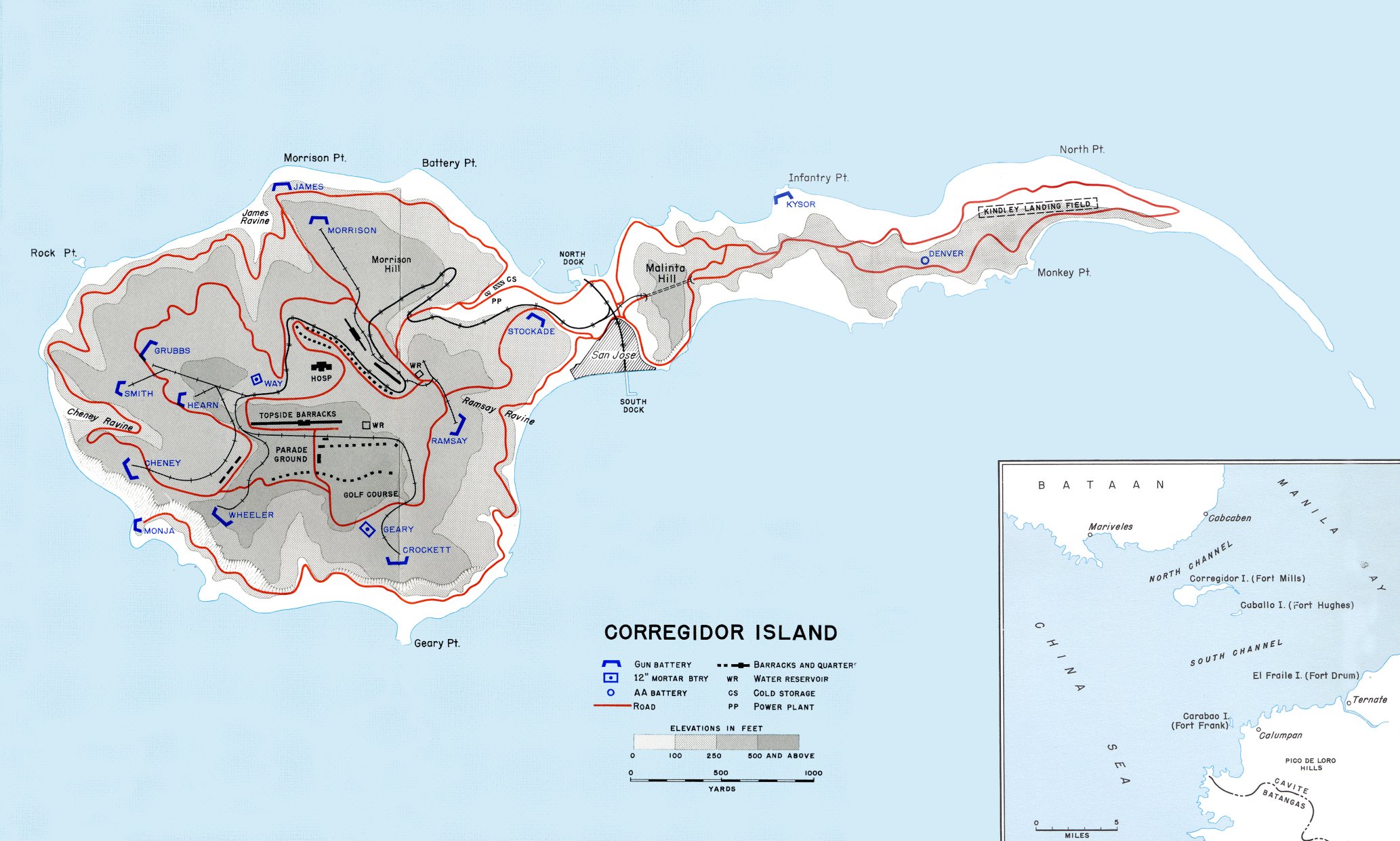 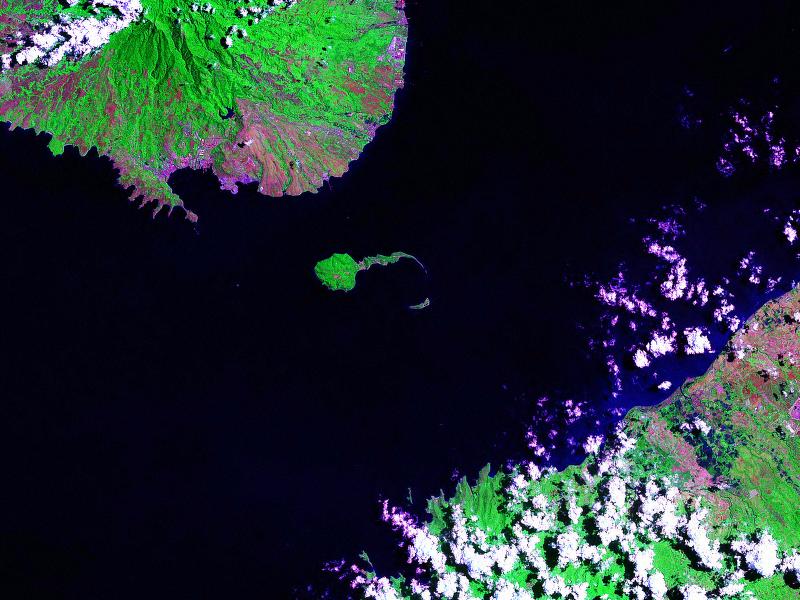 native name = Isla ng Corregidor
native name link =
location =
coordinates=coord|14|23|8|N|120|34|23|E|type:isle|display=inline,title
archipelago =
total islands =1
major islands =
area = Convert|5|km²|ha|0|abbr=on
highest mount = Topside
elevation =Convert|121|m|ft|2|abbr=on
country = Philippines
country admin divisions title =
country admin divisions =
country largest city =
country largest city population =
population =
population as of =
density =
ethnic groups = Tagalog:"For the Spanish historical administrative position, see "Corregidor is an island in the entrance of the ' . Due to its position in the bay, it has served as a focal point for the naval defenses of the capital city of . During , Corregidor was the site of several battles and its fall to the Japanese forces was instrumental in the subsequent capture of the Philippines and the retreat of the in the early stages of the war. Currently, it is an important historic and tourist site and is managed under the jurisdiction of .

The island is about 48 kilometers west of Manila. It is shaped like a , with its tail running eastward, and has a land area of 9 km². Along with Caballo (which lies 2 km south of the "tail's" tip), it partially blocks the entrance to Manila Bay, and thus has strategic importance. It also creates a northern and southern entrance to the bay.

Because of its rocky landscape and the fortifications of , the island was also known as "the Rock"citequote.

Corregidor is four miles (6 km) long and about convert|1.5|mi|km|1 at its widest point, with a total area roughly about three square miles. Its bulbous head, which points towards the rises prominently to a large flat called Topside. This was the nerve center of the Island and here was located the headquarters, barracks for enlisted personnel, officers quarters, underground ordnance shops, the traditional parade grounds, and the bulk of the batteries that constituted the strength of Corregidor.

Middleside is a small that interrupts the upward slope from Bottomside to Topside, and was the location of barracks for the enlisted men, a hospital, quarters for non-commissioned officers, a service club, and two schoolhouses—one for the children of Filipino soldiers and the other for American children.

Under the Spanish era, Corregidor served not only as a fortress of defense and a penal institution, but also as a signal outpost to warn of the approach of hostile ships, and as a station for inspection.. Corregidor comes from the Spanish word "corregir", meaning "to correct." One story states that, due to the Spanish system wherein all ships entering Manila Bay were required to stop and have their documents checked and corrected, the island was called "Isla del Corregidor" (literally, Island of Correction). Another version claims that the island was used a penitentiary or correctional institution by the Spanish and came to be called "El Corregidor".

In 1902, the island was organized as an American military reservation. In 1903, a convalescent hospital was established by the .

In 1908, a Regular Army post was established on the island, designated as Fort Mills, in honor of , Chief of Artillery of the US Army from 1905 to 1906. By early 1909, H Company of the 2nd Battalion of the Corps of Engineers was assigned to Corregidor and started on the construction of concrete emplacements, bomb-proof shelters, and trails at various parts of the island. This pioneer engineer company left Fort Mills on , .

Before the outbreak of , the island was reinforced by the 4th Marine Regiment and by mobilized troops which were sent to reinforce the island's beach defenses.

The Army post on Corregidor was named Fort Mills, that on , , on , Fort Drum, and on , Fort Frank. According to the war plan, these forts were supposed to be able to make a six-month stand, after which aid would presumably come from the . The fortifications on Corregidor were designed solely to beat off a seaborne attack. When American military planners realized that airplanes would one day render Fort Mills obsolete, the United States was restricted from improving the fortifications by the of 1922. After this, U.S. Army constructed the , with its series of related laterals, to protect its military stores and vital installations in the event of war.

The island, which sheltered Fort Mills, was a prized piece of . Its defense installations had cost the more than 150 million dollars. This amount did not include the expenditure for fortifying the neighboring islands of Caballo, Carabao, and El Fraile, on which were established forts Hughes, Frank, and Drum, respectively.

During the , General used Corregidor as headquarters until , . Between , and , , it was also the temporary location of the Government of the — on , , outside the Malinta Tunnel, President and Vice-President were inaugurated for a second term. The , the radio station of the (United States Army Forces in the Far East) broadcast from Corregidor, including the famous announcement of the fall of Bataan. ese troops forced a surrender of the remaining American and Filipino forces on Corregidor on after the .

The Battle for Corregidor was the culmination of the Japanese campaign for the conquest of the Philippines. The fall of Bataan in April 9, 1942 ended all organized opposition by the U.S. Army Forces – Far East (USAFFE) to the invading Japanese forces on Luzon in the northern Philippines. The island bastion of Corregidor, with its network of tunnels and formidable array of defensive armament, along with the fortifications across the entrance to Manila Bay, was the remaining obstacle to the 14th Japanese Imperial Army of Lieutenant General . The Japanese had to take Corregidor; as long as the island remained in American hands, they would be denied the use of the Manila Bay, the finest natural harbor in the Orient.

The Battle for the Recapture of Corregidor, between 16 February and 26 February 1945, by American and Filipino liberation forces against the defending Japanese garrison on the island fortress used by the USAFFE, which was the last bastion to surrender to invading" Japanese forces in 1942.""

There were 23 batteries installed on Corregidor, consisting of 56 Coastal guns and mortars. In addition, Corregidor had 13 anti-aircraft artillery batteries with 76 guns (28 3-inch and 48 50-caliber) and 10 60-inch Sperry searchlights.

The longest-range coastal pieces were the two convert|12|in|mm|0|sing=on guns of Batteries Hearn and Smith, with a horizontal range of convert|29000|yd|m|-3. Although capable of an all around traverse, these guns, due to their flat trajectories, were not effective for use against targets on .

Battery Way was named in honor of the Coast Artillery Corps of the U.S. Army, which along with Battery Geary, was the mainstay of the Corregidor Garrison during the Japanese invasion. Its mortars, capable of a 360-degree traverse, could fire on land targets at Bataan. They brought the most destruction on Japanese positions during the attempted landings on the southwest coast of Bataan late in January to the middle of February 1942. These mortars were silenced by enemy shelling in May 1942.

Battery Geary was a battery of six 13-ton, 12-inch mortars. This battery, when pinpointed by the Japanese, was subjected to heavy shelling. One direct hit by a 240 mm shell, which detonated the magazines of this Battery in May 1942, proved to be the most crippling shot during the entire siege of Corregidor. This shelling tossed the mortars around, one to a distance of convert|150|yd|m|-1, another was blown through three feet of reinforced concrete wall into the adjoining powder magazine of Battery Crockett. Large chunks of steel were blown as far as the Malinta Tunnel, killing 27 of the battery crew instantly. Also, one mortar still had a live round in its breech, and it was in the process of firing the shell when the magazine was hit.

*Before the war and during the siege, Corregidor depended mostly for its potable water on Bataan. For this purpose, barges were used to haul water either from Mariveles or Cabcaben, Bataan.

*There were convert|65|mi|km|0 of paved roads and trails on the island and convert|19.5|mi|km|1 of electric railroad track. The latter were used largely to haul heavy equipment and ammunition from Bottomside to the different Batteries. The Corregidor High School was where children, of both Filipino and American servicemen assigned on the island, studied. The island also had an electric trolley system as public transport, Cine Corregidor - a movie house, a baseball field and a swimming pool. The business and social center of this community was found on Topside.

*On the island was Kindley Airfield. It was named in honor of an early hero of the . It was a pre-war installation developed in the early-1920's and was rendered useless by hostile aerial bombardment in the early days of the war.

After the War, many people, most of them veterans, visited the island because of its history. Today, Corregidor is a historic monument as well as a tourist destination. Many travel companies offer day tours on the island featuring military installations used during World War II. Most of the war-ravaged buildings have not been restored, but have instead been left in reverence to the Filipino and American soldiers who died there. Standing on the highest part of Corregidor's west side is the Pacific War Memorial, which was built by the to honor the Filipino and American soldiers who participated in World War II. It was completed in 1968 at the cost of three million dollars.

The , which is the last stronghold of the joint Philippine and American military prior to the Japanese takeover during the last world war, is now home to an audio-visual presentation by National Artist of the events that took place on the island, including the reluctant departure of General Douglas MacArthur and the evacuation of the Philippine president and his family to unoccupied areas of the Philippines and then to exile in the United States.

One of the most recent additions to Corregidor is the Filipino Heroes Memorial. This 6,000-square meter complex has 14 s depicting heroic battles fought by Filipinos from the 15th century up to the present day. It was designed by Francisco Mañosa, while the murals and a statue of a Filipino guerrilla were sculpted by Manuel Casas. The complex was inaugurated by President on , .

Once every at exactly , the would light the center of the altar and visitors are required to have a moment of silence since this is the exact time and the fell into the hands of the Japanese.