Chlamydophila psittaci is a lethal intracellular bacterial species that may cause endemic avian chlamydiosis, epizootic outbreaks in mammals, and respiratory psittacosis in humans. Chlamydophila psittaci is transmitted by inhalation, contact or ingestion among birds and to mammals. Psittacosis in birds and in humans often starts with flu-like symptoms and becomes a life-threatening pneumonia. Many strains remain quiescent in birds until activated under stress. Birds are excellent, highly mobile vectors for the distribution of chlamydial infection because they feed on, and have access to, the detritus of infected animals of all sorts.

C. psittaci in birds is often systemic and infections can be inapparent, severe, acute or chronic with intermittent shedding.[1][2][3][4] C. psittaci strains in birds infect mucosal epithelial cells and macrophages of the respiratory tract. Septicaemia eventually develops and the bacteria become localized in epithelial cells and macrophages of most organs, conjunctiva, and gastrointestinal tract. It can also be passed in the eggs. Stress will commonly trigger onset of severe symptoms, resulting in rapid deterioration and death. C. psittaci strains are similar in virulence, grow readily in cell culture, have 16S rRNA genes that differ by <0.8%, and belong to eight known serovars. All should be considered to be readily transmissible to humans.

C. psittaci serovar A is endemic among psittacine birds and has caused sporadic zoonotic disease in humans, other mammals and tortoises. Serovar B is endemic among pigeons, has been isolated from turkeys, and has also been identified as the cause of abortion in a dairy herd. Serovars C and D are occupational hazards for slaughterhouse workers and for people in contact with birds. Serovar E isolates (known as Cal-10, MP or MN) have been obtained from a variety of avian hosts worldwide and, although they were associated with the 1920s–1930s outbreak in humans, a specific reservoir for serovar E has not been identified. The M56 and WC serovars were isolated during outbreaks in mammals. Many C. psittaci strains are susceptible to bacteriophages.

Life cycle and method of infection 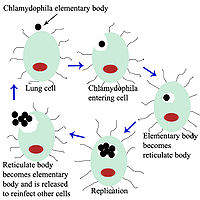 Chlamydophila psittaci is a small bacterium (0.5 micrometres) which undergoes several transformations during its life cycle. It exists as an elementary body (EB) in between hosts. The EB is not biologically active, but is resistant to environmental stresses and can survive outside a host. The EB travels from an infected bird to the lungs of an uninfected bird or person in small droplets, and is responsible for infection. Once in the lungs, the EB is taken up by cells in a pouch called an endosome by a process called phagocytosis. However, the EB is not destroyed by fusion with lysosomes, as is typical for phagocytosed material. Instead, it transforms into a reticulate body and begins to replicate within the endosome. The reticulate bodies must use some of the host's cellular machinery to complete its replication. The reticulate bodies then convert back to elementary bodies, and are released back into the lung, often after causing the death of the host cell. The EBs are thereafter able to infect new cells, either in the same organism or in a new host. Thus, the life cycle of C. psittaci is divided between the elementary body which is able to infect new hosts, but can not replicate, and the reticulate body, which replicates, but is not able to cause new infection.

In addition to symptoms and CHX, complement fixation, microimmunofluorescence and PCR tests can be used to confirm the diagnosis.

Tetracycline or macrolides can be used to treat this condition. The drugs are given intravenously or orally, depending on drug choice. Treatment should continue for 10–14 days after fever the subsides. In children or pregnant women, though, tetracycline should not be used. Ibuprofen or acetominophen, and fluids are also administered. Cigarette or tobacco smoke should be avoided. While taking tetracycline, dairy products should be avoided.