Le Chiffre (French pronunciation: [lə ʃifʁ], The Cypher or The Number) is a fictional character and the main antagonist in Ian Fleming's James Bond novel Casino Royale. On screen Le Chiffre has been portrayed by Peter Lorre in the 1954 television adaptation of the novel for CBS's Climax! television series, by Orson Welles in the 1967 spoof of the novel and Bond film series, and by Mads Mikkelsen in the 2006 film version of Fleming's novel.

Fleming based the character on occultist Aleister Crowley.[2]

Le Chiffre, alias "Die Nummer", "Mr. Number", "Herr Ziffer", "Ochiu Spart" (Romanian for "Smashed Eye") and other translations of "The Number" or "The Cipher" in various languages, is the paymaster of the "Syndicat des Ouvriers d'Alsace" (French for "Syndicate of the Alsatian Workmen"), a SMERSH-controlled trade union.

He is first encountered as an inmate of the Dachau displaced persons camp in the US zone of Germany in June 1945 and transferred to Alsace-Lorraine and Strasbourg three months later on a stateless passport. There he adopts the name Le Chiffre because as he claims, he is "only a number on a passport". Not much else is really known about Le Chiffre's background or where he comes from, except for educated guesses based on his description:

He is also fluent in French, English, and German with traces of a Marseille accent.

In the novel, he makes a major investment in a string of brothels with money belonging to SMERSH. The investment fails after a bill is signed into law banning prostitution. Le Chiffre then goes to the casino Royale-les-Eaux in an attempt to recover all of his lost funds. There, however, Bond bankrupts him in a series of games in Chemin de Fer. Le Chiffre kidnaps Bond's assistant, Vesper Lynd, to lure him into a trap and get his money back. The trap works, and Le Chiffre tortures Bond to get him to give up the money. He is interrupted by a SMERSH agent, however, who shoots him between the eyes with a silenced TT pistol as punishment for losing the money. The torture Bond suffers at the hands of Le Chiffre briefly upsets 007's confidence in his profession, and he toys with the idea of leaving the service until the novel's conclusion, when a new threat emerges.

Le Chiffre's death is seen by the Soviet government as an embarrassment, which in addition to the death and defeat of Mr. Big in Live and Let Die, leads to the events of From Russia With Love. 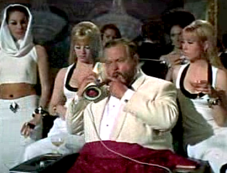 Le Chiffre is a secondary villain in the 1967 satire and appears in the only segment of the film actually adapted from Fleming's book. As in the novel, Le Chiffre is charged with recovering a large sum of money for SMERSH after he loses it at the baccarat table. He first attempts to raise the funds by holding an auction of embarrassing photographs of military and political leaders from China, the US and the USSR, but this is foiled by Sir James Bond's daughter, Mata Bond. With no other option, he returns to the baccarat table to try to win back the money. Later, he encounters baccarat Master Evelyn Tremble, who has been recruited by Bond to stop Le Chiffre from raising the money. Le Chiffre attempts to distract Tremble by performing elaborate magic tricks, but fails to prevent Tremble from winning. Afterwards, he arranges for Tremble to be kidnapped and subjects the agent to psychedelic torture in order to get back the money. The torture session is interrupted when his SMERSH masters, led by the film's main villain, Dr. Noah, shoot him dead.

Le Chiffre is the main villain of the official 2006 James Bond film, Casino Royale, portrayed by Danish actor Mads Mikkelsen. Believed by MI6 to be Albanian and officially stateless, according to his file, Le Chiffre is banker to the world's terrorist organisations. M implies that Le Chiffre was involved in the 11 September attacks, or at least deliberately profiteered off of the aftermath. In the video game version of Quantum of Solace, it is said that his birth name is "Jean Duran", in the MI6 mission briefings. A mathematical genius and a chess prodigy, his abilities enable him to earn large sums of money on games of chance and probabilities, and he likes to show off by playing poker. He suffers from haemolacria, which causes him to weep blood out of a damaged left eye, and, as in Fleming's novel, dresses in immaculate black suits and uses a Salbutamol inhaler, here plated with platinum. To date he is the only main Bond villain to die before the film's final act.

Le Chiffre is contacted by Mr. White, a representative of a terrorist organization later revealed to be Quantum. White introduces Steven Obanno, a formidable leader of the Lord's Resistance Army in Uganda to Le Chiffre, and arranges to bank several briefcases full of cash for Obanno. Le Chiffre invests the money along with his other creditors' money in the aircraft manufacturer SkyFleet. Though SkyFleet's shares have been skyrocketing, he plans to short the company by purchasing put options, and ordering the destruction of the company's new prototype airliner, set to make its first flight out of Miami International Airport. Bond intervenes and foils the plan, costing Le Chiffre his entire investment totaling US$101,206,000.

In order to win the money back, while not informing Mr. White or Obanno, Le Chiffre sets up and enters a high stakes Texas hold 'em tournament in Montenegro at the Casino Royale in an attempt to recoup the loss before Obanno learns that his money has been misappropriated. Bond is sent to make sure that Le Chiffre does not win back the money. The reasoning is to force Le Chiffre to turn to MI6 for protection, in exchange for information on his creditors and employers. Bond plants a listening device in Le Chiffre's inhaler shortly after the tournament begins.

During the tournament, an enraged Obanno and his lieutenant break into Le Chiffre's hotel room and threaten him and his girlfriend, Valenka. Le Chiffre does not blanch at the threatened amputation of Valenka's arm, and is granted one last chance to win their money back.

As Obanno leaves the room, his bodyguard spots Bond and hears Valenka's cries coming from Bond's earpiece. In the subsequent brawl, 007 kills both Obanno and his henchman, and Rene Mathis arranges the blame to be placed on Le Chiffre's bodyguard Leo.

During the tense tournament, Le Chiffre initially outwits and bankrupts Bond, who cannot get additional funding from MI6 accountant Vesper Lynd, who has accompanied Bond to make sure the money is used properly. However, Felix Leiter, an American CIA agent also playing in the game, agrees to bankroll Bond, on the condition that CIA is allowed to take Le Chiffre in afterwards. Desperate, Le Chiffre has Valenka attempt to poison Bond's drink. Bond is almost killed, but, thanks to an antitoxin kit in his car and Vesper's timely interference, is revived at the last moment and returns to the game. During the final round, Le Chiffre's full house bests the hands of the two players preceding him, but loses to Bond's straight flush.

Enraged by his loss, Le Chiffre kidnaps Vesper, forcing Bond to give chase, and Bond is led straight into his trap. Le Chiffre leaves Vesper, bound at the feet and hands, in the middle of the road, and Bond is forced to swerve to avoid hitting her and crashes his car.

When Bond regains consciousness he is stripped naked and tied to a chair with its cane seat cut out. Le Chiffre proceeds to torture Bond by repeatedly whipping him in the testicles with the large knotted end of a thick rope, trying to extort the password that will enable Le Chiffre to collect the tournament winnings. Bond refuses to give in and plays on Le Chiffre's fear that there will be retribution from the clients whose money he lost. Le Chiffre then states that if he is unable to retrieve the password than he will still kill both Bond and Vesper Lynd and opt for protection from MI6; Le Chiffre says that he wins either way. When Bond refuses to give in, Le Chiffre brandishes a knife and threatens to castrate him.

Just then, Mr. White bursts into the room, holding Le Chiffre at gunpoint and informing him that he has just become a liability. Le Chiffre pleads for his life, promising that he'll get the money, but it is to no avail; Mr. White personally executes Le Chiffre by shooting him in the forehead with a SIG-Sauer P230 fitted with a suppressor.

Appears in an Italian novel, Angelo Paratico Ben [1] Mursia 2010. under the name of Chanceaux, being a top partisan leader in Italy in April 1945.