The TT-30 (Russian: 7,62-мм самозарядный пистолет Токарева образца 1930 года, 7,62 mm Samozaryadnyj Pistolet Tokareva obraztsa 1930 goda) is a Russian semi-automatic pistol. It was developed in the early 1930s by Fedor Tokarev as a service pistol for the Soviet military to replace the Nagant M1895 revolver that had been in use since tsarist times, though it never fully replaced the M1895. 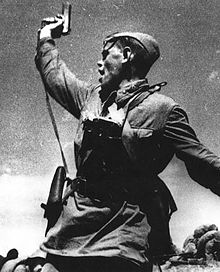 In 1930, the Revolutionary Military Council approved a resolution to test new small arms to replace its aging Nagant M1895 revolvers.[1] During these tests, on January 7, 1931, the potential of a pistol designed by Fedor Tokarev was noted. A few weeks later, 1,000 TT-30s were ordered for troop trials, and the pistol was adopted for service in the Red Army.[2]

But even as the TT-30 was being put into production, design changes were made to simplify manufacturing. Minor changes to the barrel, disconnector,[3] trigger and frame were implemented, the most notable ones being the omission of the removable backstrap and changes to the full-circumference locking lugs. This redesigned pistol was the TT-33.[2]. Most TT-33s were issued to officers. The TT-33 was widely used by Soviet troops during World War II, but did not completely replace the Nagant.

Externally, the TT-33 is very similar to John Browning's blowback operated FN Model 1903 automatic pistol, but it also used Browning's short recoil dropping-barrel system from the M1911. However, the TT-33 is not a 1911 clone. It employs a much simpler hammer/sear assembly with an external hammer. This assembly is removable from the weapon as a modular unit and includes cartridge guides that provide reliable functioning. The Soviet engineers also added several other features such as locking lugs all around the barrel (not just on top), and made several alterations to make the mechanism easier to produce and maintain, notably a captive recoil spring secured to the guide rod which does not depend on the barrel bushing to hold it under tension. Production even machined the magazine feed lips into the receiver to prevent damage and misfeeds when a distorted magazine was loaded into the magazine well.[4]

The TT-33 is chambered for the 7.62x25mm Tokarev cartridge, which was itself based on the similar 7.63x25mm Mauser cartridge used in the Mauser C96 pistol. Able to withstand tremendous abuse, large numbers of the TT-33 were produced during World War II and well into the 1950s. 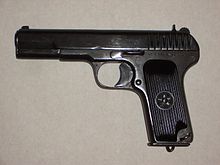 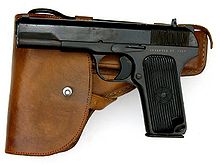 The Chinese Type 54 with holster.

The Yugoslavian M57 variant with loaded 9-round magazine

The Wehrmacht captured a fair number of TT-33s and issued them to units under the Pistole 615(r) designation. This was made possible by the fact that Soviet 7.62 mm Model 1930 Type P cartridges were nearly identical to the German 7.63×25mm Mauser cartridge; therefore German ammunition could be used in captured Soviet arms.[4]

Production of the TT-33 in the USSR ended in 1954, but copies (licensed or otherwise) were also made by China (as the Type 51, Type 54,[5] M20, and TU-90) and Poland (as the PW wz.33, manufactured from 1947 to 1959). Hungary rebarreled the pistol to fire 9×19mm Parabellum (as the M48), as well as an export version for Egypt (the Tokagypt 58) which was widely used by police forces.[4] Yugoslavia produced an improved version of the TT-33 with an integral slide safety similar to the Browning semi-auto pistols, the only Tokarevs so manufactured (as the M57, M65,[4] M70A and the 9×19mm M88). North Korea manufactured them (as the Type 68[6] or M68[4]). Romania also produced a TT-33 copy (the TTC, or Cugir Tokarov) well into the 1950s. These have been made available for commercial sale in great numbers in recent years. However, to be importable into the United States, a trigger blocking safety was added. Police in Pakistan still commonly use the TT pistol as a sidearm, though unofficially, as it is being replaced by modern 9 mm Beretta and Glock pistols. Both legal and illegal TT pistols are still manufactured in various Khyber Pass factories. 7.62×25mm ammo is also rather inexpensive and locally produced or imported from China, made by Norinco. 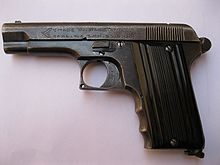 The Pakistan made TT Pistol

At one time or another most communist or Soviet bloc countries made a variation of the TT-33 pistol, until it was eventually replaced by the 8-round, 9×18mm Makarov PM pistol in 1952.

Norinco, the People's Liberation Army's state weapons manufacturer in China, manufactured a commercial variant of the Tokarev pistol chambered in the more common 9×19mm Parabellum round, known as the Tokarev Model 213, as well as in the original 7.62×25mm caliber. It features a safety catch, which was absent on Soviet-produced TT-33 handguns. Furthermore, the Model 213 features the thin slide grip grooves, as opposed to the original Russian wide-types. The 9 mm model is featured with a magazine well block mounted in the rear of the magazine well to accept 9 mm type magazines without frame modification. The Norinco model in current production is not available for sale in the United States due to import prohibitions on Chinese firearms, although older handguns of the Model 213 type imported in the 1980s and 1990s are common.

The TT-33 is still in service in the Chinese and North Korean armed forces today. The Tokarev is gaining in popularity with pistol collectors and shooters in the West because of its ruggedness, reliability and ready availability of cheap ammunition (in the US). However, some complaints include poor-quality grips (which are often replaced by the wrap-around Tokagypt 58 grips) and a hand grip which extends at a vertical angle awkward for many Western shooters. Another complaint is the poor placement of the post-production safeties installed to comply with US import regulations; many shooters disassemble the pistols, remove them and restore the Tokarevs to the original configuration. Nonetheless, the Tokarev, as well as its variants in 9 mm, is renowned for its simplicity and accuracy.[7]