21h 43m 30.46s, +58° 46′ 48.2″ Mu Cephei (μ Cep, μ Cephei), also known as Herschel's Garnet Star, is a red supergiant star in the constellation Cepheus. It is one of the largest and most luminous stars known in the Milky Way. It appears garnet red and is given the spectral class of M2Ia.

The deep red color of Mu Cephei was noted by William Herschel, who described it as "a very fine deep garnet colour, such as the periodical star ο Ceti,"[8] and it is thus commonly known as Herschel's "Garnet Star".[9] Giuseppe Piazzi called it Garnet sidus in his catalogue.[10] An alternative name, Erakis, used in Antonín Bečvář's star catalogue is probably due to confusion with Mu Draconis, which was previously called al-Rāqis [arˈraːqis] in Arabic.[11]

In 1848, English astronomer John Russell Hind discovered that it was variable. This variability was quickly confirmed by German astronomer Friedrich Wilhelm Argelander. Almost continual records of the star's variability have been maintained since 1881.[12] 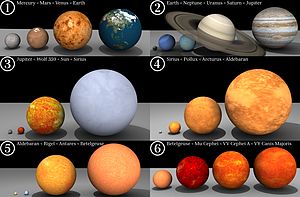 A very luminous red supergiant, Mu Cephei is one of the largest stars visible to the naked eye, and in the entire galaxy. It is best seen from the northern hemisphere from August to January.

The distance to Mu Cephei is not very well known. The Hipparcos satellite was used to measure a parallax of 0.62 ± 0.52 milliarcseconds, which corresponds to an estimated distance of about 1,612 parsecs. However, this value is close to the margin of error. A determination of the distance based upon a size comparison with Betelgeuse gives an estimate of 390 ± 140 parsecs.[6] A 2005 maximum likelihood estimate of the distance gives a value of 573 ± 99 parsecs.[4]

The star is approximately 1,650 times larger than our Sun's solar radius, and were it placed in the Sun's position, its radius would reach between the orbits of Jupiter and Saturn. Mu Cephei could fit almost 4.5 billion Suns into its volume. Only five known stars (VY Canis Majoris, KW Sagittarii, KY Cygni, V354 Cephei and VV Cephei) are believed to be larger. It is so large that it could fit 6.4 quadrillion Earths in it. If Earth were a golf ball (about 1.7 in/4.3 cm), the diameter of Mu Cephei would be greater than the length of two Golden Gate Bridges laid end-to-end (about 3.4 mi./5.5 km).

Mu Cephei is a variable star and the prototype of the class of the Mu Cephei variables. Its apparent brightness varies without recognizable pattern between magnitude +3.62 and +5 in a period of 2 to 2.5 years. Mu Cephei is 38,000 times brighter than the Sun, with an absolute visible magnitude of Mv = −7.0. Combining its absolute visible brightness, its infrared radiation and correcting for its interstellar extinction gives a luminosity of around 350,000 solar luminosities (bolometric magnitude about −9.1), making it one of the most luminous stars known.

Mu Cephei is nearing death. It has begun to fuse helium into carbon, whereas a main sequence star fuses hydrogen into helium. The helium-carbon cycle shows that Mu Cephei is in the last phase of its life and may explode as a supernova 'soon' in astronomical terms, although this might not be for some millions of years.[citation needed] When a supergiant star becomes a supernova it is destroyed, leaving behind a vast gaseous cloud and a small, dense remnant, which for a star as massive as Mu Cephei may be a black hole. Mu Cephei is currently an unstable star, showing irregular variations in light output, temperature and size.

The photosphere of Mu Cephei has an estimated temperature of 3,690 ± 50 K. It may be surrounded by a shell extending out to a distance at least equal to a 0.33 times the star's radius with a temperature of 2,055 ± 25 K. This outer shell appears to contain molecular gases such as CO, H2O and SiO.[6]

Emissions from the star suggest the presence of a wide ring of dust and water with outer radius four times that of the star (i.e. 2,600 Solar radii) and inner boundary twice the radius of the star (1,300 Solar radii).[5] Placed in the position of our Sun, its disk would span between 5.5 astronomical units (within Jupiter's orbital zone) and 11 astronomical units (beyond Saturn's orbit).[citation needed]

The star is surrounded by a spherical shell of ejected material that extends outward to an angular distance of 6″ with an expansion velocity of 10 km s−1. This indicates an age of about 2000–3000 years for the shell. Closer to the star, this material shows a pronounced asymmetry, which may be shaped as a torus. The star currently has a mass loss rate of a few times 10−7 solar masses per year.[13]