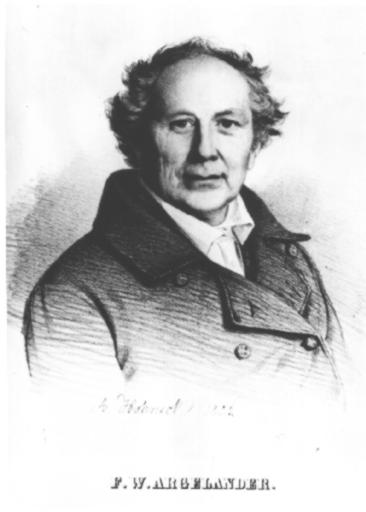 Friedrich Wilhelm August Argelander ( – ) was a n . He is known for his determinations of stellar brightnesses, positions, and distances.

Argelander was born in in the (now in ), the son of a Finnish father and German mother. He studied with Friedrich Bessel, and obtained his in 1822 at Königsberg. From 1823 until 1837, Argelander was the head of the Finnish at then at . He then moved to , . There he developed a friendship with King , who funded a new observatory at the .

Argelander excelled in developing effective, simple and fast methods for measuring star positions and magnitudes, thereby making a pioneering work for modern astronomy. He also measured star distances with heliometers. His, and his collaborators, great practical works of star cataloging and variable star research were made possible by the systematic usage of then newly developed techniques. [cite web | title = F. W. A. Argelander | url = http://www.astro.uni-bonn.de/~geffert/ge/arg/arg.htm | access-date = 2008-05-20 (in German)]

Argelander was the first astronomer to begin a careful study of s. Only a handful were known when he began, and he was responsible for introducing the modern system of identifying them. He also made a rough determination of the direction in which the was moving.

Together with and , Argelander was responsible for the known as the "", published between 1852 and 1859, which gave the positions and brightness of more than 324,000 stars, although it did not cover much of the southern half of the sky. This was the last star map to be published without the use of photography.

In 1863, Argelander founded an international organization of astronomers named the "".

* The Argelander crater on the and the are named for him.

* In 2006, the three astronomical institutes of the Bonn University were merged and renamed as the "Argelander-Institut für Astronomie".

* (Parts of this article are based on this source.)