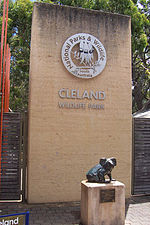 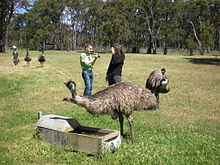 The Wildlife Park is accessible by sealed road from both the South Eastern Freeway and Greenhill Road. It is also possible to walk on a formed but steep track from Waterfall Gully or Mount Lofty.[2] A limited public bus service operates (Route 823: 3 journeys each day).[3] A fee is payable to enter the Wildlife Park (but not to the Conservation Park except for car parking at Mt Lofty summit).

Cleland Wildlife Park offers visitors an opportunity to walk through large enclosures and thereby interact with Australian animals such as kangaroos, koalas and emus, and to see others including wombats, dingos and many bird and reptile species. The park also has a variety of rare and endangered species such as the Yellow-footed Rock Wallaby, Bush Stone-curlew and Brush-tailed Bettong.

Facilities include a souvenir shop, cafe and toilets. Many visitors pay to be photographed holding koalas.[4] Several other options are available to visitors, including an Aboriginal guide on a Cultural Tour of the Yurridla Aboriginal Trail, which explains dreaming stories of dingoes, emus, koalas and Yurrabilla, the creation ancestor, and a nightwalk, uncovering the secrets of the bush.

This popular tourist destination is 727 metres (2,385 ft) above sea level. It provides sweeping vistas across the Adelaide Plains and Gulf St Vincent. Flinders Column, a white painted obelisk shaped like a lighthouse, is a landmark which can be seen from far away on a clear day.

Car parking facilities are provided: charges are payable. Public bus route 823 serves the summit with three journeys a day (including weekends and most holidays).[5]

Other facilities include an information centre/ souvenir shop, a cafe/restaurant (closed Mondays) and public toilets.

Waterfall Gully, another popular part of the park, is located on its western edge. It can be accessed via the sealed Waterfall Gully Road. A limited amount of free car parking is provided. There is no scheduled public transport service.

The main attraction is a waterfall, the largest of several in the park. The base is a short walk from the car park and the top can be reached by a formed but steep footpath, which continues to Cleland Wildlife Park and Mount Lofty summit.[6]

Other facilities include a kiosk/ restaurant and public toilets.

By far the largest part of the park consists of bushland, mostly woodland with some open spaces where clearing has taken place.[7]

There are a number of walking trails, including the Waterfall Gully - Mount Lofty summit trail which is a popular and reasonably challenging ascent of the west side of Mount Lofty,[8] and parts of the long distance Heysen and Yurrebilla Trails, which run north–south along the higher ground in the east of the park.