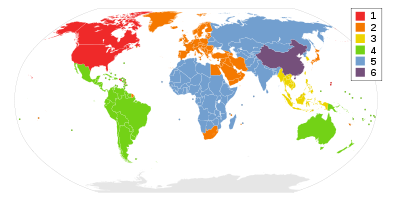 DVD region codes are a digital-rights management technique designed to allow film distributors to control aspects of a release, including content, release date, and price, according to the region. DVD video discs may be encoded with a region code restricting the area of the world in which they can be played.

The American DVD Copy Control Association in California requires that DVD-player manufacturers incorporate the regional-playback control (RPC) system – according to the Australian Competition and Consumer Commission, an Australian government agency.[1]

There are six different official regions and two informal variations.[citation needed] DVDs may use one code, a combination of codes (Multi-Region), most codes (Region 0) or every code/no codes (Region All). The commercial DVD player specification requires that a player to be sold in a given place not play discs encoded for a different region; however, region-free DVD players are also commercially available.[2] In addition, many DVD players can be modified to be region-free, allowing playback of all discs.[3]

Region 0 (playable in all regions except 7 and 8) is widely used by China and the Philippines. DVDs in Hispanophone Latin America use both the region 1 and region 4 codes. Most DVDs in India combine the region 2, region 4, and region 5 codes; Indian Disney discs contain only the region 3 code.

Any combination of regions can be applied to a single disc. For example, a DVD designated Region 2/4 is suitable for playback in Western Europe, Oceania, and any other Region 2 or Region 4 area. So-called "Region 0" and "ALL" discs are meant to be playable worldwide.

The term "Region 0" also describes the DVD players designed or modified to incorporate Regions 1–6, thereby providing compatibility with most discs, regardless of region. This apparent solution was popular in the early days of the DVD format, but studios quickly responded by adjusting discs to refuse to play in such machines. This system is known as "Regional Coding Enhancement".[4] In turn, region-free players have all eight flags set, similar to Region ALL DVDs. Many also include RCE breaks, to skip repeating menus or bypass static images.

Region-code enhanced, also known as just "RCE" or "REA",[4] was a retroactive attempt to prevent the playing of one region's discs in another region, even if the disc was played in a region-free player. The scheme was deployed on only a handful of discs. The disc contained the main program material region coded as region 1. But it also contained a short video loop of a map of the world showing the regions, which was coded as region 2, 3, 4, 5, and 6. The intention was that when the disc was played in a non-region 1 player, the player would default to playing the material for its native region. This played the aforementioned video loop of a map, which was impossible to escape from, as the user controls were disabled.

However, the scheme was fundamentally flawed, as a region-free player tries to play a disc using the last region that worked with the previously inserted disc. If it cannot play the disc, then it tries another region until one is found that works. RCE could thus be defeated by briefly playing a "normal" region 1 disc, and then inserting the RCE protected region 1 disc, which would now play. RCE caused a few problems with genuine region 1 players.

As of 2007[update] many "multi-region" DVD players defeated regional lockout and RCE by automatically identifying and matching a disc's region code and/or allowing the user to manually select a particular region.[5][6] Some manufacturers of DVD players now freely supply information on how to disable regional lockout, and on some recent models, it appears to be disabled by default.[7][8] Computer programs such as DVD Shrink can make copies of region-coded DVDs without RCE restriction.

Region coding has several purposes, but the primary one is price discrimination, i.e., allowing the manufacturer to charge different prices in different regions: there is great disparity among the regions of the world in how much a person is willing to pay for a DVD. Price discrimination is especially relevant to DVDs as their marginal cost is relatively small, allowing the distributor a great deal of flexibility in pricing.

Another purpose is controlling release dates. A practice of movie marketing threatened by the advent of home video is to release a movie to theaters, and for general sale, later in some countries than in others. Videotapes were inherently regional since formats had to match those of the encoding system used by television stations in that particular region, such as NTSC and PAL, although from early 1990s PAL machines increasingly offered NTSC playback. DVDs are less restricted in this sense, and region coding allows movie studios to better control the global release dates of DVDs.

Thirdly, the copyright in some titles has different owners in different territories. Region coding allows copyright holders to prevent a DVD from being purchased from a region from which they do not derive royalties.

DVDs are also formatted for use on two conflicting regional television systems: 480i/60 Hz and 576i/50 Hz, which in analog contexts are often referred to as 525/60 (NTSC) and 625/50 (PAL/SECAM) respectively. Strictly speaking, NTSC, PAL and SECAM are all analog chroma-encoding formats which have no relevance in the digital domain (as evident in the conflation of PAL and SECAM, which are actually two distinct analog color systems). However, these terms continue to be used (improperly) as a method of identifying refresh rates and vertical resolution.

In general, it is easier for consumers in PAL countries to view NTSC DVDs than vice versa. Almost all DVD players sold in PAL countries are capable of playing both kinds of discs, and most modern PAL TVs can handle the converted signal.† However, most NTSC players cannot play PAL discs, and most NTSC TVs do not accept 576i video signals. Those in NTSC countries, such as in North America, generally require both a region-free, multi-standard player and a multi-standard television to view PAL discs, or a converter box, whereas those in PAL countries generally require only a region-free player. There are also differences in pixel aspect ratio (720 × 480 vs. 720 × 576) and display frame rate (29.97 vs. 25). Again, NTSC discs can be played on most DVD systems worldwide,[citation needed] while PAL discs play on very few players outside of PAL/SECAM countries.[9] However, as of 2009, around 80% of NTSC TVs and DVD players are capable of playing PAL DVDs, due to them being upgraded with converter systems.[citation needed]

Most computer-based DVD software and hardware can play both NTSC and PAL video and both audio standards.[9]

^† NTSC discs may be output from a PAL DVD player in three different ways:

Usually a configuration flag is set in each player's firmware at the factory. This flag holds the region number that the machine is allowed to play. Region-free players are DVD players shipped without the ability to enforce regional lockout (usually by means of a chip that ignores any region coding), or without this flag set.

However, if the player is not region-free, it can often be unlocked with an unlock code entered via the remote control. This code simply allows the user to change the factory-set configuration flag to another region, or to the special region "0". Once unlocked this way, the DVD player allows the owner to watch DVDs from any region. Many websites exist on the Internet offering these codes, often known informally as hacks. Many websites provide instructions for different models of standalone DVD players, to hack, and their factory codes.

In most computer drives, users are allowed to change the region code up to five times.[11] However, if the number of allowances reaches zero, the region last used will be permanent even if the drive is transferred to another computer. This limit is built into the drive's controller software, called firmware. Resetting the firmware count can be done with first- or third-party software tools, or by reflashing (see above) to RPC-1 firmware

Since some software does not work correctly with RPC-1 drives, there is also the option of reflashing the drive with a so-called auto-reset firmware. This firmware appears as RPC-2 firmware to software, but will reset the region changes counter whenever power is cycled, reverting to the state of a drive that has never had its region code changed.

Most freeware and open source DVD players, such as VLC, ignore region coding. Most commercial players are locked to a region code, but can be easily changed with software.

Other software, known as DVD region killers, transparently remove (or hide) the DVD region code from the software player. Some can also work around locked RPC-2 firmware.

The region coding of a DVD can be circumvented by making a copy that adds flags for all region codes, creating an all-region DVD. DVD backup software can do this, and some can also remove Macrovision, CSS, and disabled user operations (UOPs).

The Xbox, Xbox 360, PlayStation 2 and PlayStation 3 consoles are all region-locked for DVD playback. The PlayStation 2[13] can be modified to have its regional-locking disabled through the use of modchips.

Blu-ray Discs use a much simpler region-code system than DVD with only three regions, labeled A, B and C.

Region-code enforcement has been discussed as a possible violation of World Trade Organization free trade agreements or competition law.[14] The Australian Competition and Consumer Commission (ACCC) has warned that DVD players that enforce region-coding may violate their Trade Practices Act.[15][1][16] Under New Zealand copyright law, DVD region codes and the mechanisms in DVD players to enforce them have no legal protection.[17] The practice has also been criticized by the European Commission[18] which is currently[when?] investigating whether the resulting price discrimination amounts to a violation of EU competition law.[19]

The Washington Post has highlighted how DVD region-coding has been a major inconvenience for frequent travelers, students of foreign languages, immigrants who want to watch films from their homeland and foreign film enthusiasts.[2] Another criticism is that region-coding allows for local censorship. For example, the Region 1 DVD of the drama film Eyes Wide Shut (1999), directed by Stanley Kubrick, contains the digital manipulations necessary for the film to secure an MPAA R-rating, whereas these manipulations are not evident in non-Region 1 discs.[20]

Another criticism is that certain shows have not been released at all in some countries. For example, Spider-Man: The Animated Series has only had an official DVD release in the United Kingdom on PAL region 2, and there are no plans to release the show elsewhere.[citation needed] As a result, fans of the series who don't live in region 2 countries require a region-free player to view the series, while most consumers in NTSC locations are required to buy a region-free, multi-standard player and either a compatible TV or a signal converter box alongside a region-free player. However, NTSC-region hardware capable of playing PAL discs is becoming increasingly common.[citation needed]