Martyrs of the Spanish Civil War

Martyrs of the Spanish Civil War

Martyrs of the Spanish Civil War is the name given by the Catholic Church to the people who were killed by Republicans during the war because of their faith.[2][1] As of July 2008, almost one thousand Spanish martyrs have been beatified or canonized. For some two thousand additional martyrs, the beatification process is underway.

During the Spanish Civil War of 1936-1939, and especially in the early months of the conflict, individual clergymen and entire religious communities[citation needed] were executed, with a death toll of 13 bishops, 4,172 diocesan priests and seminarists, 2,364 monks and friars and 283 nuns, for a total of 6,832 clerical victims, as part of what is referred to as Spain's Red Terror.[3]

Pope John Paul II beatified a total of about 500 martyrs in the years 1987, 1989, 1990, 1992, 1993, 1995, 1997 and 2001. Some 233 executed clergy were beatified by John Paul II on the 11th of March 2001.[4] Regarding the selection of Candidates, Archbishop Edward Novack from the Congregation of Saints explained in an interview with L'Osservatore Romano: "Ideologies such as Nazism or Communism serve as a context of martyrdom, but in the foreground the person stands out with his conduct, and, case by case, it is important that the people among whom the person lived should affirm and recognize his fame as a martyr and then pray to him, obtaining graces. It is not so much ideologies that concern us, as the sense of faith of the People of God, who judge the person's behaviour [5]

Benedict XVI beatified 498 more Spanish martyrs in October 2007,[6] in what has become the largest beatification ceremony in the history of the Catholic Church.[7] In this group of people, the Vatican has not included all Spanish martyrs, nor any of the 16 priests who were executed by the nationalist side in the first years of the war. This decision has caused numerous criticisms from surviving family members and several political organisations in Spain.[8]

The beatification process recognized the extraordinary fate and often brutal death of the persons involved. Some have criticized the beatifications as dishonoring non-clergy who were also killed in the war, and as being an attempt to draw attention away from the church's support of Franco (some quarters of the Church called the Nationalist cause a "crusade").[9] Within Spain, the Civil War still raises high emotions. The act of beatification has also coincided in time with the debate on the Law of Historical Memory (about the treatment of the victims of the war and its aftermath) promoted by the Spanish Government.

Responding to the criticism, the Vatican has described the October 2007 beatifications as relating to personal virtues and holiness, not ideology. They are not about "resentment but... reconciliation". The Spanish government has supported the beatifications, sending Foreign Minister Miguel Ángel Moratinos to attend the ceremony.[10] Among the present was Juan Andrés Torres Mora, a relative of one of the martyrs and the Spanish MP who had debated the memory law for PSOE .[11]

The October 2007 beatifications have brought the number of martyred persons beatified by the Church to 977, eleven of whom have already been canonized as Saints.[7] Because of the extent of the persecution, many more cases could be proposed; as many as 10,000 according to Catholic Church sources. The process for beatification has already been initiated for about 2,000 people.[7]

At the October 28, 2007 beatifications, Pope Benedict underscored the call to sanctity for all Christians, saying it was "realistic possibility for the entire Christian people".[12] He also noted, "This martyrdom in ordinary life is an important witness in today's secularized society." [12]

They were a group of priests and brothers of the Passionist Congregation killed by Republican forces during the Spanish Civil War. They were beatified by Pope John Paul II on October 1, 1989. Eye-witnesses reported that all of the Passionists had forgiven their murderers before they died. A witness to the murder of Father Niceforo reported that after being shot the priest turned his eyes to heaven then turned and smiled at his murderers. At this point one of them, now more infuriated than ever, shouted:

With that he shot him at point blank range. 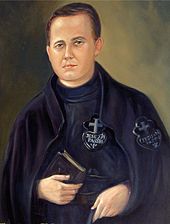 Saint Innocencio of Mary Immaculate killed by leftists in the Asturias Uprising in 1934 before he was about to say Mass because he chose to defy the leftists prohibition on religious instruction in school.

Eugenio Sanz-Orozco Mortera (Jose Maria of Manila) was born on September 5, 1880 in Manila, Philippines. He was a Franciscan Capuchin priest. He died a martyr on August 17, 1936 in Madrid, Spain during the Spanish civil war. He is venerated in the Catholic Church, which celebrate his Feast on August 17.

Bartolomé Blanco Márquez was born in Cordoba, Spain in 1914. He was arrested as a Catholic leader—he was the secretary of Catholic Action and a delegate to the Catholic Syndicates—on Aug. 18, 1936. He was executed on Oct. 2, 1936, at age 21, while he cried out, “Long live Christ the King!" Born in Pozoblanco 25 November 1914, Bartolome was orphaned as a child, and raised by family with whom he worked. He was an excellent student, studying under the tutelage of the Salesians.

During the 19th and the 20th centuries, the role of the Catholic Church in the Spanish society and government was one of the issues polarizing Spanish society[dubious – discuss]. It supported and was strongly supported by and associated with the Spanish monarchy and the system of privileges for a small aristocratic elite.[14] However at the same time, even in military and conservative circles anti-clericism began to gain ground, partly as a reaction to the Carlist wars, and partly due to the feeling that anti-Enlightenment religious dogma was responsible for Spain's failure to develop and imperial decline.[citation needed]

The Second Spanish Republic saw an alternation of progressive and conservative coalition governments between 1931 and 1936. Amidst the disorder caused by the military coup of July 1936, many supporters of the legitimate (Republican) government pointed their weapons against individuals they considered local reactionaries, including priests and nuns.

A paradoxic case for foreign Catholics was that of the Basque Nationalist Party, at the time a Catholic party from the Basque areas, who after some hesitation, supported the Republican government in exchange for an autonomous government in the Basque Country. Although, virtually every other group on the Republican side was involved in the anticlerical persecution, the Basques did not play a part.[15] The Vatican diplomacy tried to orient them to the National side, explicitly supported by Cardinal Isidro Goma y Tomas, but the BNP feared the centralism of the Nationals. Some Catalan nationalist also found themselves in the same situation, such as members of de Unió Democràtica de Catalunya party whose most relevant leader, Manuel Carrasco i Formiguera was killed by the Nationalists in Burgos on 1938.

A number of controversies have arisen around the beatification of some of these clerics, most of them opposing the notion of these priests being killed for mere religious hatred and, while not excusing their brutal murders, putting them in the context of the historical moment and questioning the appropriateness of their beatification.

One of the most notable of these has centred around Cruz Laplana y Laguna, bishop of Cuenca, a well-known supporter of the monarchic regime, who since the proclamation of the Second Republic had carried out a number of political, pro right-wing campaigns throughout the province, and had established close contacts with military officials such as general Joaquín Fanjul, a supporter of Francisco Franco's coup. The bishop of Cuenca is described by his biographer as "supreme advisor" to the general, as well as being closely involved with the Falange. In 1936 he personally endorsed José Antonio Primo de Rivera, the leader of this party, as a candidate to the 1936 local elections. When the pro-coup uprising in Cuenca failed, the bishop was arrested by Republican militiamen for collaborationism. He was tried for conspiring against the Republican government and executed on 8 August.[16]

Fulgencio Martínez, a priest in the village of La Paca in Murcia who was shot after the uprising, was reported by many locals to be closely allied to the local landowners. Over several days before the uprising, father Fulgencio met with these landowners in the village casino—the hub of social life for the local elites in rural Spain—to organise the support for the military coup by offering guns and money to any of those who would join an improvised militia. On the 18th of July, the day of the uprising, father Fulgencio was among the armed thugs who were going through the village streets on lorries rallying support for the uprising under shouts of "Long live the army!" and "Long live general Queipo de Llano!".[17]

Another priest from Murcia was murdered for his alleged molestation of a number of local young women. He was well known in the city of Lorca for practicing extortionate moneylending among the workers in the impoverished mining barrios, and who made business out of stocking food and reselling it at inflated prices at a time where one of the main causes of death among the worker classes was malnutrition.[17]

Public statements by some of these clerics have also been widely publicised as a form of criticism against their beatification. Rigoberto Domenech, archbishop of Zaragoza, declared publicly on the 11th of August 1936 that the military uprising was to be supported, and its violent actions approved, because "... it is not done in the service of anarchy, but in the benefit of order, fatherland and religion". Another notorious and polemic statement was that given in November 1938 by Leopoldo Eijo Garay, bishop of Madrid-Alcalá, regarding a possible truce between Republican and rebel forces; “To tolerate democratic liberalism… would be to betray the martyrs”.[18]

The controversy surrounding the beatification of Augustinian friar Gabino Olaso Zabala has been different. Friar Zabala was murdered during the civil war and was beatified. However, attention was called to the fact that this priest had been formerly accused of carrying out acts of torture on Filipino friar Mariano Dacanay, in the days when friar Olaso was a missionary in the former Spanish colony and the Filipinos were trying to liberate themselves from Spanish rule ”.[19]

It's often questioned why weren't beatified all the Basque catholic priests and clergymen who were killed by Franco's nationalist troops under the accusation of supporting the Red Army, after nationalist victory in Basque provinces, in what is considered "fascist terror".