Dig Out Your Soul

Dig Out Your Soul

Dig Out Your Soul is the seventh and final studio album by English rock band Oasis. It was released in October 2008. The first single, "The Shock of the Lightning", was released on 29 September 2008. In promotion of the album, the band embarked on a world tour, debuting in Seattle, Washington at the WaMu Theater, and continuing for eighteen months. In 2009, the tour concluded (due to Noel Gallagher quitting the band) with major dates at some of the UK's biggest stadiums, notably the new Wembley Stadium, Sunderland's Stadium of Light and Edinburgh's Murrayfield as well as Ireland's Slane Castle. They also performed three hometown shows at Manchester's Heaton Park. To date, Dig Out Your Soul has sold around 5 million copies worldwide.[citation needed]It was also Oasis's first album since 1997's 'Be Here Now' to have two singles in the US Billboard 200, with The Shock of the Lightning reaching #93 and Falling Down peaking at #106 respectively.

A January 2007 interview for NME, Noel Gallagher gave new details on his vision for the album: "All the tunes I've written recently have been on the kind of acoustic side, you know? But for the next record I really fancy doing a record where we just completely throw the kitchen sink at it," he explained. "We haven't done that since Be Here Now. I'd like to get, like, a 100-piece orchestra and choirs and all that stuff. I think since Standing on the Shoulder of Giants we've been trying to prove a point of just bass, drums, guitar and vocals and nothing fancy. But I kind of like fancy! I'd like to make an absolutely fucking colossal album. You know? Like literally two orchestras, stuff like that."[1]

In October 2007, Noel revealed more about the record to BBC 6 Music: "Funnily enough, we all write separately, but for some reason all the songs sound like they've got a common thread. We've been focusing round the grooves more this time, the last album was quite 'songy,' if that makes any sense, I don't know. But it was quite 'songy:' "The Importance of Being Idle", "Let There Be Love" - it was quite a British, retro, 60s sounding album. This is kinda focusing round the grooves more. Saying that, we've only done two tracks but all the demos that we've done are great." Noel also revealed details about his lyrics for his new songs: "I've literally got nothing left to write about: I've wrote about being a youth, and I've wrote about being a rock star, and I've wrote about living life in the big city. I've been re-visiting some of my more psychedelic trips of a younger man, because I remember them all you see...putting them to music."[2]

In a November 2007 interview with Reuters, singer Liam Gallagher revealed more details on how the record is going: "All the songs are wrote (sic), this record's gonna be fuckin' rockin'. There's no acoustic on it, man. We rehearsed about 10 tunes before coming in. Three are mine. Some are Noel's, some are Gem's, some are Andy's. We're there for a long time, so we just keep pickin' em off the tree, man. Some are sounding really fucking heavy, and then we're picking some out, and you go, 'Well that doesn't sit with that, right.' So we just keep moving about. We've got plenty of songs. We're not gonna go bored." Gallagher also revealed that the record,"Will have everything thrown at it. Let's just hope that Noel's learnt his lesson in the studio this time!"[3]

In 15 June 2008 interview with talkSPORT, Noel said the album was "colossal", "rockin'" and added "it's gonna sound great live, which is the most important thing." In further interviews, Gallagher was also quick to challenge the belief that the album would be a continuation of the band's Britpop history, claiming "It's not Britpop... some of it sounds a bit glam. There's no pop singles on it."[4]

Between various songs on the album are several interludes (such as the sound of someone walking down a beach). Oasis have described these as "bits inbetween"[5]

For the recording of Dig Out Your Soul, Oasis reunited with Don't Believe the Truth producer Dave Sardy at Abbey Road Studios in Westminster.[6] Sessions began in July/August 2007 and concluded around Christmas with a few intermitted breaks in-between.[7][2][3][8] There was a brief period of confusion in which it seemed that Oasis would have had to forgo recording at Abbey Road due to U2 having reserved the recording areas that Oasis wished to use far in advance. The issue was resolved when Noel bought U2's spot in cash without the band’s knowledge- this was possible due to the fact that the studios gave preference to cash payments over credit, which U2 had been booked with.[9]

The album art was created by artist Julian House. Ralph Steadman suggested the phrase "Dig Out Your Soul" for the album’s title, a line in the song "To Be Where There’s Life".[6] According to Noel, "We gave him [Steadman] the album, he listened to it and we gave him the lyrics… He came back with a list of titles and one of them was Dig Out Your Soul.[6] Noel’s only instruction was "As long as we don’t call it Oasis I don’t give a fuck".[6]

Mixing took place in Los Angeles, and was slowed by constant equipment failure.[10] After the album was completed and the band began discussions with several record companies with which to release it. In August 2008, Reprise Records announced that it would distribute Dig Out Your Soul in North America.

The songs "I Want to Live in a Dream in My Record Machine" and "Come on It's Alright" were planned to be on Dig Out Your Soul, but were ultimately left off as according to Noel, Liam "ran out of time" to record them.[11]

Critical reception of the album was generally favourable. Many critics lauded Dig Out Your Soul as one of the strongest albums ever recorded by the band, and noted that "it seems Oasis have made something that can happily play alongside Morning Glory."[20] Jonathan Cohen of Billboard says that with Dig Out Your Soul, the group "[Gets] back to its stripped-down rock roots" and that the opening song, "Bag It Up" harks back to Definitely Maybe's "Columbia".[21] Luke Bainbridge of The Observer gave the album 4 stars out of 5, saying "You could say that if Definitely Maybe was their Stone Roses, Dig Out Your Soul is their Second Coming. It won't win them any new fans, but those that believed the truth last time will dig this."[22]

Not all the reviews have been positive though, Jody Rosen of Rolling Stone magazine gave the album a 2½ out of 5 stars.[23] Rosen said of the new album that, "Dig Out Your Soul is an almost comically generic Oasis release, from its preponderance of plodding midtempo rockers ("Bag It Up," "Waiting for the Rapture") to the vaguely Indian raga-flavored psychedelic anthems ("To Be Where There's Life")."[23]

In the UK, the album sold 90,000 copies on its first day of release, making it the second fastest selling album of 2008, behind Coldplay's Viva la Vida or Death and All His Friends. It debuted on the UK Albums Chart at #1, with first week sales of 200,866 copies, making it the 51st fastest selling album ever in the UK. The album debuted at #5 on the Billboard 200 in the U.S., with 53,000 copies sold.[24] It is the highest chart position of any Oasis album in the US since 1997's Be Here Now which debuted at #2, but fewer total opening week sales than Don't Believe the Truth.[24] It has so far spent a total of 30 weeks in the French Albums Chart,[25] the most ever by any Oasis album.

The album was legitimately advertised through television advertising and the use of billboards throughout major cities in the UK. Advertising was also taken in national newspapers around the time of the albums release. The album was also advertisied for free on social networking website, Myspace.[26] The comedian Russell Brand- a friend of Noel Gallagher, lent his voice to the albums TV campaign. 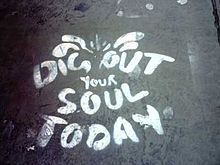 In London, Leeds, Glasgow, Brighton and Liverpool, coinciding with the launch of the album, the logo of the album appeared as a spray tag on pavements, including on the forecourt of the just newly opened Shepherd's Bush station.[27]

Sheet music and lyrics were given to several busking bands around the New York area. It was reported through the band's official website that four songs ("The Turning", "(Get Off Your) High Horse Lady", "Bag It Up" and "The Shock of the Lightning") were performed by the bands on the streets of New York. It was reported by the New York Times that these buskers were selected after applying online through the band's official website. An official video from the band's website shows Gem Archer, Andy Bell and Liam Gallagher present during the rehearsals of the new songs.

To coincide with an "Oasis extravaganza" issue of NME magazine on 16 September 2008, a free songbook was included. The songbook featured chords and lyrics to three songs: "Bag It Up", "The Turning" and "(Get Off Your) High Horse Lady". There are also various album and band images in the booklet. Also included is a CD-ROM with interviews from all band members, wallpapers, various competitions and a two-part video tutorial on how to play "Supersonic".[28]

"Bag It Up", "The Shock of the Lightning" and "Waiting for the Rapture" is featured as downloadable content in the Oasis Track Pack for Guitar Hero World Tour. The rest of the album was made available on 29 January 2009.[29]