Springbrook National Park is a national park at Springbrook on the McPherson Range in the Gold Coast hinterland of Queensland, (Australia), 96 km south of Brisbane. It is part of the Shield Volcano Group of the World Heritage site Gondwana Rainforests of Australia (formerly known as the Central Eastern Rainforest Reserves). In December 1994, the UNESCO World Heritage Committee officially extended the Central Eastern Rainforest Reserves Australia (CERRA) World Heritage Area over the Scenic Rim (including Main Range, Mount Barney, Lamington and Springbrook National Parks and Goomburra Forest Reserve) and the rainforests of northern New South Wales. In 2007 the areas of the Gondwana Rainforests of Australia were added to the Australian National Heritage List. The park is part of the Scenic Rim Important Bird Area, identified as such by BirdLife International because of its importance in the conservation of several species of threatened birds. [1]

In all four sections of Springbrook National Park (Springbrook Plateau, Natural Bridge, Numinbah and Mount Cougal) you can picnic, study nature and enjoy a wide range of walks in a natural environment. Springbrook Plateau section has many lookouts with spectacular views. Access to the plateau and park is by a sealed road from Nerang via the Numinbah Valley or by road from Mudgeeraba.[2] 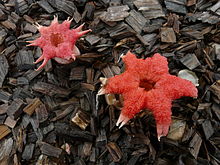 At between 600 to 1000 m above sea level,[3] Springbrook Plateau can be quite cool even in summer. The area averages more than 3,000 mm of rain a year,[4] most of which falls between December and March. Natural Bridge section receives most of its annual rainfall (2,500 mm) during the hot, humid summer. This is also the location where the UK television programme I'm a Celebrity... Get Me out of Here! has been filmed.

The southern cliffs in Springbrook (and Lamington National Park) are part of the remnants of the northern rim of the huge, ancient Tweed Volcano. The 6,197 ha Springbrook National Park comprises four reserves on and around the plateau: Springbrook Plateau section along the crest of the plateau; Mount Cougal section to the east; and Natural Bridge and Numinbah sections to the west. The cliff are resistant, volcanic based rhyolite.[2] Rock overhangs are common and massive rock falls sometimes dislodge house-sized rocks.[2]

The national park preserves rainforest and eucalypt forests in the cliff-lined headwaters of rivers and creeks flowing to the Gold Coast, in particular the Nerang River on the plateau's west and Little Nerang River to the east, both of which have eroded away less resistant rock.[2] Where the waterways flow over the escarpment 16 waterfalls have developed.[2] 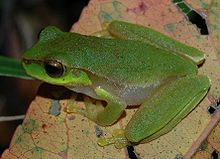 The park is good location for the sighting of nocturnal animals such as the Mountain Brushtail Possum, the ringtail possum and sugar glider.[5] Due to land clearing in the hinterland district Springbrook National Park has become a haven for birds.[4] In total the park provides habitat for more than a hundred different bird species,[3] including the Yellow-tailed Black Cockatoo, Rufous Fantail, Satin Bowerbird, Whipbird and the Albert's Lyrebird to name a few.[4]

Long-finned Eels are commonly found in the pools of the plateau and there are numerous reptiles such as the Land Mullet which is the world's largest species of skink, lace monitor and amphibians species like the Orange-eyed Treefrog and Great Barred Frog.[5] The rare Richmond Birdwing butterfly, Blue Spiny Crayfish and glow-worms which are the larvae of the fungus fly are found in the park. Red-necked Pademelons and koalas can also be seen. 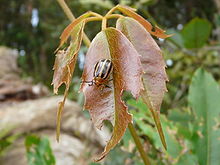 Beetle on a leaf near Goomoolahra Falls

The flora is highly diverse due to the high rainfall and variety of volcanic soil types. Subtropical rainforest dominated by Black and White Booyong Srgyrodendron spp. is prominent on basaltic soils while warm temperate rainforest that is dominated by Coachwood, occurs on the poorer rhyolitic soils. Giant Brush Box are found to the east of the plateau and Flooded Gums may also be found in areas of basalt soils.[2] One small stand of cool temperate rainforest, dominated by Antarctic Beech, is located at the Best of All Lookout. Some of the beech trees are 3,000 years old.[3] Remarkably the Springbrook Leatherwood a tree which grows to 25 m in height and found in warm temperate rainforest only on Springbrook was discovered in 1994 by local botanist David Jinks.[citation needed]

Other more fire prone areas support open forests dominated by New England Blackbutt and Blue Mountain Ash.[2] Grasstrees are commonly seen in the park.[2] Rock outcrops support areas of montane heath or shrubland dominated by species such as Leptospermum variable, Banksia spinulosa and Prostanthera phylicifolia. These heath areas are best appreciated in spring when most of the wildflowers bloom. 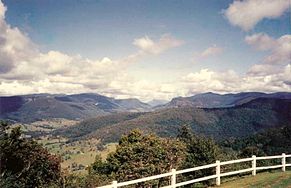 Springbrook Plateau to the left of Numinbah Valley and Lamington National Park.

The Mount Cougal section of the park is located about 20 kilometres inland from Currumbin. It was begun in 1938 with 142 ha set aside, and additions over time brought it to 811 ha and in 1990 it was amalgamated with the Springbrook National Park.

The section is named for Mount Cougal which is in the park, located just on the Queensland side of the border with New South Wales. The mountain has two peaks, called the East Peak and West Peak, rising 694 metres above sea level.

The local Yugambeh Aboriginal peoples call the peaks Ningeroongun and Barrajanda. They tell of a legendary hunter called Gwayla who had two prized hunting dogs (dingos). They were killed and they were buried under the twin peaks, and from then on the peaks were known by their names.

The only tracks or facilities in this section of the park at Cougal's Cascades which is the headwaters of the Currumbin Creek. A road leads in to a carpark and picnic ground, and from there a walking track goes up the creek cascades. There are no tracks up Mount Cougal itself.

In 1943 a bush sawmill was established near the creek, producing timber for packing crates for the local banana growers[3] when other timber supplies were being directed towards World War II. The easily milled timbers of the flooded gum and blue fig were taken, and later various other timbers. It ceased operations in 1955 due to an especially wet winter. A small display of some of the sawmill parts was restored in 1986 at the end of the walking track.

The Natural Bridge is a naturally formed rock arch over Cave Creek, a tributary of the Nerang River. It was formed from a waterfall which undercut a cave beneath the waterfall and dug a pothole on top, until the two joined and the creek flowed through the cave, leaving an arch across the front.[6]

Waterfall running through the Natural Bridge during Summer.

The bridge is in the territory of the local Kombumerri aboriginal people (a family group of the Yugambeh language peoples). The first Europeans to find it are said to be timber cutters Alexander (Sandy) Duncan and Din Guinea.

The cave is home to a colony of glow worms (larvae of the insect Arachnocampa flava) and commercial operators lead night tours into the cave. Swimming is no longer permitted in order to protect the glow worm habitat. This applies to the area bounded by the walking track / circuit. Downstream access to the creek is allowed but the pools are too shallow for swimming. Access to this section of the park is from the Nerang-Murwillumbah Road.