Example of a particle collimator

A collimator is a device that narrows a beam of particles or waves. To "narrow" can mean either to cause the directions of motion to become more aligned in a specific direction (i.e., collimated or parallel) or to cause the spatial cross section of the beam to become smaller. 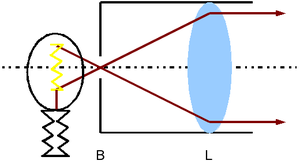 An example of an optical collimator with a bulb, an aperture (B), and a positive lens (L)

In optics, a collimator may consist of a curved mirror or lens with some type of light source and/or an image at its focus. This can be used to replicate a target at infinity without parallax.

Optical collimators can be used to calibrate other optical devices,[1] to check if all elements are aligned on the optical axis, to set elements at proper focus, or to align two or more devices such as binoculars and gun barrels/gunsights.[2] A surveying camera may be collimated by setting its fiduciary markers so that they define the principal point, as in photogrammetry.

Optical collimators are also used as gun sights in the collimator sight, which is a simple optical collimator with a cross hair or some other reticle at its focus. The viewer only sees an image of the reticle and has to use either with both eyes open while one looking into the collimator sight, with one eye open and moving the head to alternately see the sight and then at the target, or use one eye to partially see the sight and target at the same time.[3] Adding a beam splitter allows the viewer to see the reticle and the field of view, making a reflector sight.

Collimators may be used with laser diodes and CO2 cutting lasers. Proper collimation of a laser source with long enough coherence length can be verified with a shearing interferometer. The collimator consists of sheets of lead, which can be slid over one another to restrict the beam either one or two direction.

In neutron, X-ray and gamma ray optics, a collimator is a device that filters a stream of rays so that only those traveling parallel to a specified direction are allowed through. Collimators are used in neutron, X-ray, and gamma-ray optics because it is not yet possible to focus radiation with such short wavelengths into an image through the use of lenses as is routine with electromagnetic radiation at optical or near-optical wavelengths. Collimators are also used with radiation detectors in nuclear power stations for monitoring sources of radioactivity. 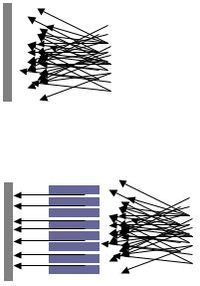 The figure to the right illustrates how a Söller collimator is used in neutron and X-ray machines. The upper panel shows a situation where a collimator is not used, while the lower panel introduces a collimator. In both panels the source of radiation is to the right, and the image is recorded on the gray plate at the left of the panels.

Without a collimator rays from all directions will be recorded; for example, a ray that has passed through the top of the specimen (to the right of the diagram) but happens to be travelling in a downwards direction may be recorded at the bottom of the plate. The resultant image will be so blurred and indistinct as to be useless.

In the lower panel of the figure, a collimator has been added (blue bars). This may be a sheet of lead or other material opaque to the incoming radiation with many tiny holes bored through it or in the case of neutrons it can be a sandwich arrangement (which can be up to several feet long - see ENGIN-X) with many layers alternating between neutron absorbing material (e.g. Gadolinium) with neutron transmitting material. This can be something simple e.g. air. or if mechanical strength is needed then aluminium may be used. If this forms part of a rotating assembly, the sandwich may be curved. This allows energy selection in addition to collimation - the curvature of the collimator and its rotation will present a straight path only to one energy of neutrons. Only rays that are travelling nearly parallel to the holes will pass through them—any others will be absorbed by hitting the plate surface or the side of a hole. This ensures that rays are recorded in their proper place on the plate, producing a clear image.

For industrial radiography using gamma radiation sources such as Iridium-192 or Cobalt-60, a collimator allows the radiographer to control the exposure of radiation to expose a film and create a radiographic "negative", a.k.a., a radiograph, to inspect materials for defects. A collimator in this instance is most commonly made out of tungsten, and is rated according to how many half value layers it contains, i.e., how many times it reduces undesirable radiation by half. For instance, the thinnest walls on the sides of a 4 HVL tungsten collimator 0.52" thick will reduce the intensity of radiation passing through them by 88.5%. The shape of these collimators allows the radiographer to direct the radiation to the film and away from other workers. 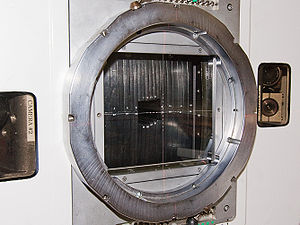 Collimator for a neutron stream, University of Washington cyclotron

Although collimators improve resolution, they also reduce intensity by blocking incoming radiation, which is undesirable for remote sensing instruments that require high sensitivity. For this reason, the gamma ray spectrometer on Mars Odyssey is a non-collimated instrument. Most lead collimators let less than 1% of incident photons through. Attempts have been made to replace collimators with electronic analysis.[citation needed]

Collimators are used in linear accelerators used for radiotherapy treatments. They help to shape the beam of radiation emerging from the machine, they can limit the maximum field size of a beam. The treatment head of a linear accelerator consists of both a primary and secondary collimator. The primary collimator is positioned after the electron beam has reached a vertical orientation. When using photons, it is placed after the beam has passed through the X-ray target. The secondary collimator is positioned after either a flattening filter (for photon therapy) or a scattering foil (for electron therapy). The secondary collimator consists of two jaws which can be moved to either enlarge or minimize the size of the treatment field.