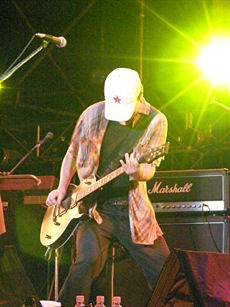 Chinese Rock (中国摇滚, pinyin: Zhōngguó yáogǔn; also 中国摇滚音乐, Zhōngguó yáogǔn yīnyuè, lit. "Chinese shaking and rolling music" or "Chinese rock and roll music"), occasionally referred as Mandorock or Cantorock depending on the language of the song in question, is commonly used to describe a wide variety of forms of rock and roll music, in connection with the rock bands and solo artists from native Chinese language spoken region (including Mainland China, Taiwan, Hong Kong, Macau, etc.). Typically, Chinese Rock is a fusion forms, based on America, Britain, Japan and other area, accompaning the grand presentation of traditional Chinese music.

Chinese Rock had its origins in Northwest Wind (西北风, xibeifeng) style of music, which emerged as a main genre in Mainland China.[1] The new style was triggered by two new songs, "Xintianyou" (信天游) and "Nothing To My Name" (一无所有), both of which drew heavily on the folk song traditions of northern Shaanxi Province in the northwest. They combined this with a western-style fast tempo, strong beat and extremely aggressive bass lines. In contrast to the mellow cantopop style, Northwest Wind songs were sung loudly and forcefully. It represented the musical branch of the large-scale Root-Seeking (寻根, xungen) cultural movement that also manifested itself in literature and in film. Cui Jian's Northwest Wind album Rock 'N' Roll on the New Long March, which included "Nothing To My Name", has been called "China's first rock album".[2]

Many Northwest Wind songs were highly idealistic and heavily political, parodying or alluding to the revolutionary songs of the Communist state, such as "Nanniwan" (南泥湾) and "The Internationale" (国际歌). It is, however, associated with the non-Communist national music side instead of the revolutionary side. The music reflected dissatisfaction among Chinese youth, as well as the influence of western ideas such as individuality and self-empowerment. Both music and lyrics articulated a sense of pride in the power of the northwest's peasantry. Songs such as "Sister Go Boldly Forward" (妹妹你大胆的往前走) came to represent an earthy, primordial masculine image of Mainland China, as opposed to the soft, sweet, polished urban gangtai style.

"Prison Songs" (囚歌) became popular in 1988 and early 1989, parallel to the Northwest Wind style. The fad was initiated by Chi Zhiqiang (迟志强), who wrote lyrics about his time in jail and set them to folk melodies from northeast China. In contrast to Northwest Wind songs, prison songs were slow, "weepy" and invoked negative role models, often using vulgar language and expressing despair and cynicism. Their non-conformist values are apparent in such songs as "Mother Is Very Muddle-Headed" and "There Is Not a Drop of Oil in the Dish". The popularity of these songs reflected the fact that many people in China during the 1980s became tired of official artistic representations and discourse. The patrons of prison songs were the urban youth, and private entrepreneurs, who at that time were mostly from marginal backgrounds.

The birthplace of Chinese rock was in Beijing.[3] As the nation's capital, the music was highly politicised and open to a range of foreign influences. It was marginal for most of the 80s, consisting of live performances in small bars and hotels. The music was almost exclusively for the domain of university students and "underground" bohemian circles. In late 1989 and early 1990 Chinese rock partially emerged into mainstream music as a combination of the Northwest Wind and prison song fads.

The first Chinese rock song was arguably the Northwest Wind anthem "Nothing To My Name", first performed in 1984 by Cui Jian, widely recognised as the father of Chinese rock. The song introduced into post-revolutionary China a whole new ethos that combined individualism, direct and bold expression. It soon came to symbolise the frustration harboured by a disillusioned generation of young intellectuals who grew cynical about Communism and critical of China's traditional and contemporary culture. It also expressed, even for older Chinese, a dissatisfaction with unrealized promises of the Chinese regime.

After the Tian'anmen Square protests, rock became part of general urban youth culture in China. Its rise from marginality was celebrated on 17 and 18 February 1990, when Beijing's largest ever all-rock concert was held in the Capital Gymnasium, one of the city's largest halls. The concert featured six rock bands, among them are Cui Jian's ADO and Tang Dynasty (唐朝). The criterion that the organisers set as qualification to participate was "originality", generally a Western artistic ethos.

Chinese rock reached a peak of creativity and popularity between 1990 and 1993. In 1991, the glam metal band Black Panther released their self-titled debut album. With glossy production and hard rock melodies backing the sincere voice of lead singer Dou Wei, it featured hit singles such as "Don't Break My Heart and "Ashamed". A year later, the album went onto sell more than 1,000,000 copies in China, a standard never before achieved in Chinese rock history. Another band, Tang Dynasty, whose style was comparable to British heavy metal, successfully broke another barrier. Their singles "9/4 (a reference to the song's time signature)", "The Sun", and "Choice" climbed the charts. Once again, it was not until 1992, that their debut "A Dream Return To Tang Dynasty" sold over 2,000,000 copies throughout Asia, including Japan, Korea, and the Southeast. From there, other previously formed rock bands, such as the first all female band, "Cobra", and hard rockers "The Face" (each established in 1989), achieved greater success than ever. In addition, dozens of newer bands formed during the peak of their success, and rock music was performed on a regular basis. Big name artists and bands were featured in media such as CCTV and MTV, while other lesser known acts made a presence in small-scale, underground rock parties. The core participants in rock subculture adopted characteristic nonconformist appearance and behaviour. These included glam rock styles: pretty face, long hair, jeans, silver metal ornaments, black leather coats, as well as emerging grunge styles: Flannel shirts, and do it yourself ethics, coupled with a carefree, hippie-style behaviour. The decline of Northwest Wind and simultaneous rise of rock music represented a shift in the attitude of many of China's intellectuals. Nostalgia changed into an unequivocally fierce negation, a sense of alienation from China's traditional and rural culture.

By 1994, mainstream popularity of Chinese rock slowly began to decline. This can only be attributed to strict censorship by the Communist party, such as the banning of rock from television and restrictions on performances.[3] More importantly, the decline of rock reflected the general lack of interest in politicised cultural products, thoughts, or behaviour. People became more interested in engaging with the market economy, making money and improving their living standard. Cross-border cultural exchange facilitated by increased economic openness, and the radical commercialisation of the music industry in the mid-90s both lead to the import of overseas music, particularly from Taiwan and Hong Kong. Cantopop singers such as Andy Lau were backed up by well-resourced record companies and could raise revenues from film-making and advertising, two sources usually rejected by Chinese rock musicians. Moreover, the level of censorship imposed on c-pop was less damaging, since gangtai culture is more independent from mainland culture. With the tragedy of Nirvana frontman Kurt Cobain's death, a whole new scene had emerged in the underground.

During 1994, former Black Panther frontman Dou Wei released "Dark Dreams" with his new band "The Dreaming". This album marked a complete departure from his "glam metal" days. Instead, this album put more emphasis on thicker, and more jangly guitars. Another change was that Dou started singing in a thin, almost apathetic drone-like voice. He also began experimenting with gothic and electronic sounds, and earned a whole new kind of respect, as well as credibility in the alternative nation. Another unlikely figure in the scene was the father of Chinese rock himself, Cui Jian. A rare compilation album, titled "Rock Pioneers" was also released. The album showcased raw, rather unorthodox playing styles, as well as a rejection (even sometimes a mockery) of mainstream rock music. With the exception of Dream, the only band on the compilation to achieve mainstream success was Thin Man, who went on to revitalize rock back into the masses. Self-styled punk He Yong fiercely resisted mainstream culture and their cantopop imitators on the mainland. His only album, "Garbage Dump", was embraced by troubled Chinese youth, and earned him an enormous cult following. In 1995, a handful of younger punk bands (Brain Failure, Reflector, A Jerks, and 69) produced an album called "Wuliao Contingent," (无聊军队, better translated as "Battalion of Boredom") representing the boredom and frustration collectively felt within the urban landscape. At the forefront was Brain Failure, the most successful of these bands, who continue to tour the world with their ska/punk sound. English is used to both express what Chinese lyrics cannot, and also to crossover to the western music market. One of the significant turning points for rock was Cui Jian's performance with The Rolling Stones in 2003 at the age of 42. It opened the genre to the rest of the world for the first time.

From 2000 to 2004 post punk and extreme metal entered the underground scene and ascended among the fans. In 2004–2005, Beijing's Joyside went on their first tour of China. American filmmaker Kevin Fritz followed them to make the film Wasted Orient. It was released on DVD in 2007 by Plexifilm.[4] The film is China's version of Decline Of Western Civilization. It depicts comically the pitfalls associated with trying to tour a country that has little taste for Rock n' Roll music. In this film the original line-up of Joyside including Bian Yuan, Liu Hao, Fan Bo, Yang Yang, & Xin Shuang shows these colorful characters drowning away in alcohol is both hilarious and depressing at the same time. The film also includes some of Joyside's early music, which brought them some recognition. The film Wasted Orient is non-political, and strays away from making any superficial social commentary. While Joyside is not particularly known for the talent, the film present Chinese rock music in the new millennium in the most authentic, raw, and genuine form[citation needed].

The Beijing Midi Modern School of Music and Music Festival

Another important step in the development of Chinese rock music had been the Beijing Midi School of Music in Beijing. Established 1993 by Zhang Fan, it was the first school in China offering classes for jazz music and rock music. Started as a school festival in 1999, the Midi Modern Music Festival advanced to the largest rock music festival in China with up to 80000 visitors and over 100 bands. Both the school and the festival supported the underground scene in China and opened the door for over 18 foreign bands in 2006 to perform at the festival and throughout the country. (i.e. Alev, Monokino, Yokohama Music Association, The Wombats, etc.). 1

In addition to the Midi school, the Painkiller Heavy Music Magazine started efforts to bring bands such as Edguy, Lacrimosa and Hatesphere to China and organized China tours for them. Especially in the metal and gothic genre these tours are considered milestones in China.

The 2008 Olympics and the Sichuan earthquake

A major drawback for the music scene in general was the cancellation of several events leading up to the 2008 Olympic Games, including the 2008 Sichuan Earthquake. The 2008 Midi Modern Music Festival was cancelled (cancellation note) and delayed to October 2008, the Soilwork gig (preannouncement) had to be cancelled, as the band did not receive their visas and the German Esplanade in Chongqing was stopped by the organizers (change note).

The Sichuan Earthquake in general shook the music scene and spawned dozens of "We are together" and "Think of Sichuan" gigs and charity events throughout Beijing and other cities. London Chinese Radio made a Special Earthquake Edition on their New Sounds of China podcast to cover this.