The MMR vaccine is an immunization shot against measles, mumps, and rubella (also called German measles). It was first developed by Maurice Hilleman while at Merck in the late 1960s.[1]

The vaccine is a mixture of three live attenuated viruses, administered via injection. The shot is generally administered to children around the age of one year, with a second dose before starting school (i.e. age 4/5). The second dose is not a booster; it is a dose to produce immunity in the small number of persons (2–5%) who fail to develop measles immunity after the first dose.[2] In the United States, the vaccine was licensed in 1971 and the second dose was introduced in 1989.[3] It is widely used around the world; since introduction of its earliest versions in the 1970s, over 500 million doses have been used in over 60 countries. As with all vaccinations, long-term effects and efficacy are subject to continuing study. The vaccine is sold by Merck as M-M-R II, GlaxoSmithKline Biologicals as Priorix, Serum Institute of India as Tresivac, and Sanofi Pasteur as Trimovax.

It is usually considered a childhood vaccination. However, it is also recommended for use in some cases of adults with HIV.[4][5]

Measles cases reported in the United States before and after introduction of the vaccine.

Before the widespread use of a vaccine against measles, its incidence was so high that infection with measles was felt to be "as inevitable as death and taxes."[6] Today, the incidence of measles has fallen to less than 1% of people under the age of 30 in countries with routine childhood vaccination.[citation needed] Reported cases of measles in the United States fell from hundreds of thousands to tens of thousands per year following introduction of the vaccine in 1963. Increasing uptake of the vaccine following outbreaks in 1971 and 1977 brought this down to thousands of cases per year in the 1980s. An outbreak of almost 30,000 cases in 1990 led to a renewed push for vaccination and the addition of a second vaccine to the recommended schedule. Fewer than 200 cases have been reported each year since 1997, and the disease is no longer considered endemic.[7][8][9]

Measles is endemic worldwide. Although it was declared eliminated from the U.S. in 2000, high rates of vaccination and good communication with persons who refuse vaccination is needed to prevent outbreaks and sustain the elimination of measles in the U.S.[12] Of the 66 cases of measles reported in the U.S. in 2005, slightly over half were attributable to one unvaccinated individual who acquired measles during a visit to Romania.[13] This individual returned to a community with many unvaccinated children. The resulting outbreak infected 34 people, mostly children and virtually all unvaccinated; 9% were hospitalized, and the cost of containing the outbreak was estimated at $167,685. A major epidemic was averted due to high rates of vaccination in the surrounding communities.[12]

Mumps is another viral disease of childhood that was once very common. If mumps is acquired by a male who is past puberty, a possible complication is bilateral orchitis which can in some cases lead to sterility.[14]

Rubella, otherwise known as German measles, was also very common before the advent of widespread vaccination. The major risk of rubella is in pregnancy. If a pregnant woman is infected, her baby may contract congenital rubella from her, which can cause significant congenital defects.[15]

All three diseases are highly contagious.

The combined MMR vaccine was introduced to induce immunity less painfully than three separate injections at the same time, and sooner and more efficiently than three injections given on different dates.

In 2005, the Cochrane Library published a review of 31 scientific studies. One of its main results: "We could not identify studies assessing the effectiveness of MMR that fulfilled our inclusion criteria even though the impact of mass immunisation on the elimination of the diseases has been largely demonstrated." Its authors concluded, "Existing evidence on the safety and effectiveness of MMR vaccine supports current policies of mass immunisation aimed at global measles eradication in order to reduce morbidity and mortality associated with mumps and rubella."[16] 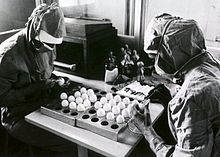 The component viral strains of MMR vaccine were developed by propagation in animal and human cells. The live viruses require animal or human cells as a host for production of more virus.

For example, in the case of mumps and measles viruses, the virus strains were grown in embryonated hens' eggs and chick embryo cell cultures. This produced strains of virus which were adapted for the hens egg and less well-suited for human cells. These strains are therefore called attenuated strains. They are sometimes referred to as neuroattenuated because these strains are less virulent to human neurons than the wild strains.

MMR II is supplied freeze-dried (lyophilized) and contains live viruses. Before injection it is reconstituted with the solvent provided.

The MMR vaccine is administered by a subcutaneous injection.The second dose may be given as early as one month after the first dose.[21] The second dose is not a booster; it is a dose to produce immunity in the small number of persons (2–5%) who fail to develop measles immunity after the first dose. In the U.S. it is done before entry to kindergarten because that is a convenient time.[2]

Adverse reactions, rarely serious, may occur from each component of the MMR vaccine. 10% of children develop fever, malaise and a rash 5–21 days after the first vaccination; 5% develop temporary joint pain.[22] Older women appear to be more at risk of joint pain, acute arthritis, and even (rarely) chronic arthritis.[23] Anaphylaxis is an extremely rare but serious allergic reaction to the vaccine.[24] One cause can be egg allergy.[25] The vaccine product brief lists many other possible adverse reactions.[26]

The number of reports on neurologic disorders is very small, other than evidence for an association between a form of the MMR vaccine containing the Urabe mumps strain and rare adverse events of aseptic meningitis, a transient mild form of viral meningitis.[23][27] The UK National Health Service stopped using the Urabe mumps strain in the early 1990s due to cases of transient mild viral meningitis, and switched to a form using the Jeryl Lynn mumps strain instead.[28] The Urabe strain remains in use in a number of countries; MMR with the Urabe strain is much cheaper to manufacture than with the Jeryl Lynn strain,[29] and a strain with higher efficacy along with a somewhat higher rate of mild side effects may still have the advantage of reduced incidence of overall adverse events.[28]

The Cochrane Library review found that, compared to placebo, MMR vaccine was associated with fewer upper respiratory tract infections, more irritability, and a similar number of other adverse effects. The review also found several problems in the quality of MMR vaccine safety studies, and recommended the adoption of standardized definitions of adverse events. The review's abstract concludes, "The design and reporting of safety outcomes in MMR vaccine studies, both pre- and post-marketing, are largely inadequate. The evidence of adverse events following immunisation with MMR cannot be separated from its role in preventing the target diseases."[16]

In the UK, the MMR vaccine was the subject of controversy after publication of a 1998 paper by Andrew Wakefield et al. reporting a study of twelve children who had bowel symptoms along with autism or other disorders, including cases where onset was believed by the parents to be soon after administration of MMR vaccine.[30] In 2010, Wakefield's research was found by the General Medical Council to have been "dishonest",[31] and The Lancet fully retracted the original paper.[32] The research was declared fraudulent in 2011 by the British Medical Journal.[33] Several subsequent peer-reviewed studies have failed to show any association between the vaccine and autism.[34]

The Centers for Disease Control and Prevention,[35] the Institute of Medicine of the National Academy of Sciences,[36] the UK National Health Service[37] and the Cochrane Library review[16] have all concluded that there is no evidence of a link between the MMR vaccine and autism.

Administering the vaccines in three separate doses does not reduce the chance of adverse effects, and it increases the opportunity for infection by the two diseases not immunized against first.[34][38] Health experts have criticized media reporting of the MMR-autism controversy for triggering a decline in vaccination rates.[39] Before publication of Wakefield's findings, the inoculation rate for MMR in the UK was 92%; after publication, the rate dropped to below 80%. In 1998, there were 56 measles cases in the UK; by 2008, there were 1348 cases, with 2 confirmed deaths.[40]

In Japan, the MMR vaccination has been discontinued, with single vaccines being used for each disease. Rates of autism diagnosis have continued to increase, showing no correlation with the change.[41]

The MMRV vaccine, a combined measles, mumps, rubella and varicella vaccine, has been proposed as a replacement for the MMR vaccine to simplify administration of the vaccines.[21] Preliminary data indicate a rate of fever-induced seizure of 9 per 10,000 vaccinations with MMRV, as opposed to 4 per 10,000 for separate MMR and varicella injections; U.S. health officials therefore do not express a preference for use of MMRV vaccine over separate injections.[42]