The ten digits of a GN-4 Nixie tube.

A nixie tube is an electronic device for displaying numerals or other information. The glass tube contains a wire-mesh anode and multiple cathodes. In most tubes, the cathodes are shaped like numerals. Applying power to one cathode surrounds it with an orange glow discharge. The tube is filled with a gas at low pressure, usually mostly neon and often a little mercury and/or argon, in a Penning mixture.[1]

Although it resembles a vacuum tube in appearance, its operation does not depend on thermionic emission of electrons from a heated cathode. It is therefore called a cold-cathode tube (a form of gas filled tube), or a variant of neon lamp. Such tubes rarely exceed 40 °C (104 °F) even under the most severe of operating conditions in a room at ambient temperature.[2]

The most common form of nixie tube has ten cathodes in the shapes of the numerals 0 to 9 (and occasionally a decimal point or two), but there are also types that show various letters, signs and symbols. Because the numbers and other characters are arranged one behind another, each character appears at a different depth, giving Nixie based displays a distinct appearance. A related device is the pixie tube, which uses a stencil mask with numeral-shaped holes instead of shaped cathodes. Some Russian nixies, e.g. the IN-14, used an upside-down digit 2 as the digit 5, presumably to save manufacturing costs as there is no obvious technical or aesthetic reason.

Each cathode can be made to glow in the characteristic neon red-orange color by applying about 170 volts DC at a few milliamperes between a cathode and the anode. The current limiting is normally implemented as an anode resistor of a few tens of thousands of ohms. Nixies exhibit negative resistance and will maintain their glow at typically 20 V to 30 V below the strike voltage. Some color variation can be observed between types, caused by differences in the gas mixtures used. Longer-life tubes that were manufactured later in the nixie timeline have mercury added to reduce sputtering[2] resulting in a blue or purple tinge to the emitted light. In some cases, these colors are filtered out by a red or orange filter coating on the glass. 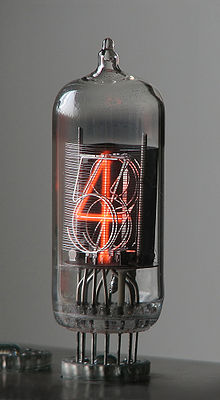 The way the digits are stacked in a nixie tube is visible in this picture.

Nixies were used as numeric displays in early digital voltmeters, multimeters, frequency counters and many other types of technical equipment. They also appeared in costly digital time displays used in research and military establishments, and in many early electronic desktop calculators, including the first: the Sumlock-Comptometer ANITA Mk VII of 1961 and even the first electronic telephone switchboards. Later alphanumeric versions in fourteen segment display format found use in airport arrival/departure signs and stock ticker displays. Some elevators used nixies to display floor numbers. 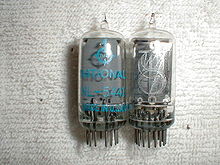 Average longevity of nixie tubes varied from about 5,000 hours for the earliest types, to as high as 200,000 hours or more for some of the last types to be introduced. There is no formal definition as to what constitutes "end of life" for nixies, mechanical failure excepted. Some sources (Weston 1968, p. 340) suggest that 50% reduction in emitted light would not be acceptable; however cathode poisoning resulting in incomplete digit display, while generally not preventing the tube from being used, may also be considered unacceptable. Nixie tubes are susceptible to multiple failure modes, including

Driving nixies outside of their specified electrical parameters will accelerate their demise, especially excess current, which increases sputtering of the electrodes. A few extreme examples of sputtering have even resulted in complete disintegration of nixie tube cathodes.

As testament to their longevity, and that of the equipment which used them, in 2006 several suppliers still provide common nixie tube types as service replacement parts, new in original packaging.[citation needed] Equipment with nixie tube displays in excellent working condition is still plentiful, though much of it has been in frequent use for 30–40 years or more. Such items can easily be found as surplus and obtained at very little expense. In the former Soviet Union, nixies were still being manufactured in volume in the 1980s, so Russian and Eastern European nixies are still available.

One advantage of the Nixie tube is that its cathodes are typographically designed, shaped for legibility. In most types, they are not placed in numerical sequence from back to front, but arranged so that cathodes in front of the one that is lit obscure it minimally. The digit sequence is rarely given; one arrangement is 6 7 5 8 4 3 9 2 0 1 from front (6) to back (1).[3]

The early Nixie displays were made by a small vacuum tube manufacturer called Haydu Brothers Laboratories, and introduced in 1955[4] by Burroughs Corporation, who purchased Haydu and owned the name Nixie as a trademark. The name Nixie was derived by Burroughs from "NIX I", an abbreviation of "Numeric Indicator eXperimental No. 1."[5] Similar devices that functioned in the same way were patented in the 1930s, and the first mass-produced display tubes were introduced in 1954 by National Union Co. under the brand name Inditron. However, their construction was cruder, their average lifetime was shorter, and they failed to find many applications due to their complex periphery.

Burroughs even had another Haydu tube that could operate as a digital counter and directly drive a Nixie tube for display. This was called a "Trochotron", in later form known as the "Beam-X Switch" counter tube; another name was "magnetron beam-switching tube", referring to their similarity to a cavity magnetron. Trochotrons were used in the UNIVAC 1101 computer, as well as in clocks and frequency counters.

The first trochotrons were surrounded by a hollow cylindrical magnet, with poles at the ends. The field inside the magnet had essentially-parallel lines of force, parallel to the axis of the tube. It was a thermionic vacuum tube; inside were a central cathode, ten anodes, and ten "spade" electrodes. The magnetic field and voltages applied to the electrodes made the electrons form a thick sheet (as in a cavity magnetron) that went to only one anode. Applying a pulse with specified width and voltages to the spades made the sheet advance to the next anode, where it stayed until the next advance pulse. Count direction was not reversible. A later form of trochotron called a Beam-X Switch replaced the large, heavy external cylindrical magnet with ten small internal metal-alloy rod magnets which also served as electrodes.

This tube displays symbols, such as % and °C.

Glow-transfer counting tubes, similar in essential function to the Trochotrons, had a glow discharge on one of a number of main cathodes, visible through the top of the glass envelope. Most used a neon-based gas mixture and counted in base-10, but faster types were based on argon, hydrogen, or other gases, and for timekeeping and similar applications a few base-12 types were available. Sets of "guide" cathodes (usually two sets, but some types had one or three) between the indicating cathodes moved the glow in steps to the next main cathode. Types with two or three sets of guide cathodes could count in either direction. A well-known trade name for glow-transfer counter tubes in the United Kingdom was Dekatron. Types with connections to each individual indicating cathode, which enabled presetting the tube's state to any value (in contrast to simpler types which could only be directly reset to zero or a small subset of their total number of states), were trade named Selectron tubes.

Some Nixie-like displays made by other firms were called by various trademarked names including Digitron, Inditron and Numicator. A proper generic term is "cold cathode neon readout tube", though the phrase "nixie tube" quickly entered the vernacular as a generic name. Hundreds of variations of this design were manufactured by many firms, from the 1950s until the 1990s.

Nixie tubes were superseded in the 1970s by light-emitting diodes (LEDs) and vacuum fluorescent displays (VFDs), often in the form of seven-segment displays. The VFD used a hot filament to emit electrons and phosphor-coated anodes, like a cathode ray tube, shaped to represent segments of a digit, pixels of a graphical display, or complete letters, symbols, or words. Whereas nixies typically require 180 volts to illuminate, VFDs only require relatively low voltages to operate, making them easier and cheaper to use. VFDs have a simple internal structure, resulting in a bright, sharp, and unobstructed image. Unlike nixies, the glass envelope of a VFD is evacuated rather than being filled with a specific mixture of gases at low pressure.

Specialized high voltage driver chips such as the 7441/74141 were available to drive nixies. LEDs were better suited to the low voltages that integrated circuits used, which was an advantage for devices such as pocket calculators, digital watches, and handheld digital measurement instruments. Also, LEDs were much smaller and sturdier, without a fragile glass envelope. LEDs had lower power consumption than both VFDs and Nixie tubes. 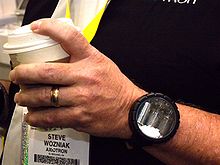 A Nixie watch on the wrist of Steve Wozniak, co-founder of Apple Inc.

Citing dissatisfaction with the aesthetics of modern digital displays and a nostalgic fondness for the styling of obsolete technology, significant numbers of electronics enthusiasts in recent years have shown interest in reviving nixies.[7] Unsold tubes that have been sitting in warehouses for decades are being brought out and used, the most common application being in homemade digital clocks. This is somewhat ironic, since during their heyday, nixies were generally considered too expensive for use in mass-market consumer goods such as clocks. This recent surge in demand has caused prices to rise significantly, particularly for large tubes. The largest type known to be in the hands of collectors, the Rodan CD-47/GR-414 (220 mm [8.7 in] tall),[8] have been sold for hundreds of dollars each, but these are extremely rare and only found in a few areas of the world by persistent and fortunate seekers. Prices for other large types displaying digits over 25 mm (1 in) tall have risen by double, triple or more between 1998 and 2005.

In addition to the tube itself, another important consideration is the relatively high-voltage circuitry to drive the tube. The original 7400 series drivers ICs such as the 74141 BCD decoder driver (or its Russian equivalent the K155ID1) have long since been out of production and are rarer than NOS tubes. However modern bipolar transistors with high voltage ratings are now available cheaply, such as MPSA92 or MPSA42 - an unusual example where an original IC design has been replaced by discrete transistors.