A neon lamp (also neon glow lamp) is a miniature gas discharge lamp that typically contains neon gas at a low pressure in a glass capsule. Only a thin region adjacent to the electrodes glows in these lamps, which distinguishes them from the much longer and brighter neon tubes used for signage. The term "neon lamp" is generally extended to lamps with similar design that operate with different gases. Neon glow lamps were very common in the displays of electronic instruments through the 1970s; the basic design of neon lamps is now incorporated in contemporary plasma displays.

Neon was discovered in 1898 by William Ramsey and Morris W. Travers. The characteristic, brilliant red color that is emitted by gaseous neon when excited electrically was noted immediately; Travers later wrote, "the blaze of crimson light from the tube told its own story and was a sight to dwell upon and never forget."[1]

Neon's scarcity precluded its prompt application for electrical lighting along the lines of Moore tubes, which used electric discharges in nitrogen and which were commercialized in the early 1900s. After 1902, Georges Claude's company, Air Liquide, was producing industrial quantities of neon as a byproduct of his air liquefaction business, and in December 1910 Claude demonstrated modern neon lighting based on a sealed tube of neon. In 1915 a U.S. patent was issued to Claude covering the design of the electrodes for neon tube lights;[2] this patent became the basis for the monopoly held in the U.S. by his company, Claude Neon Lights, through the early 1930s.[3]

Around 1917, Daniel McFarlan Moore, then working at the General Electric Company, developed the neon lamp, which has a very different design than the much larger neon tubes used for neon lighting. The difference in design was sufficient that a U.S. patent was issued for the lamp in 1919.[4] A Smithsonian Institution website notes, "These small, low power devices use a physical principle called coronal discharge. Moore mounted two electrodes close together in a bulb and added neon or argon gas. The electrodes would glow brightly in red or blue, depending on the gas, and the lamps lasted for years. Since the electrodes could take almost any shape imaginable, a popular application has been fanciful decorative lamps. Glow lamps found practical use as indicators in instrument panels and in many home appliances until the widespread commercialisation of Light-Emitting Diodes (LEDs) in the 1970s."[5]

A small electric current, which may be AC or DC, is allowed through the tube, causing it to glow orange-red. The formulation of the gas is typically the classic Penning mixture, 99.5% neon and 0.5% argon, which has lower striking voltage than pure neon. The applied voltage must initially reach the striking voltage before the lamp is visible. At the striking voltage, the lamp enters a breakdown mode and exhibits a glow discharge. Once lit, the voltage required to sustain the discharge is significantly (~30%) lower than the striking voltage. This is due to the organization of positive ions near the cathode. When driven from a DC source, only the negatively charged electrode (cathode) will glow. When driven from an AC source, both electrodes will glow (each during alternate half cycles). These attributes make neon bulbs (with series resistors) a convenient low-cost voltage testers; they determine whether a given voltage source is AC or DC, and if DC, the polarity of the points being tested. Neon lamps operate using a low current glow discharge. Higher power devices, such as mercury-vapor lamps or metal halide lamps use a higher current arc discharge. 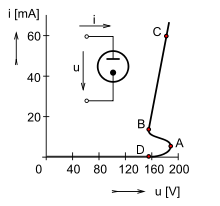 Graph showing the relationship between current and voltage across a neon lamp.[dubious – discuss]

Once the neon lamp has reached breakdown, it can support a large current flow. Because of this characteristic, electrical circuitry external to the neon lamp must limit the current through the circuit or else the current will rapidly increase until the lamp is destroyed. For indicator-sized lamps, a resistor typically limits the current. Larger neon sign sized lamps often use a specially constructed high voltage transformer with high leakage inductance or other electrical ballast to limit the available current.

When the current through the lamp is lower than the current for the highest-current discharge path, the glow discharge may become unstable and not cover the entire surface of the electrodes.[dubious – discuss] This may be a sign of aging of the indicator bulb, and is exploited in the decorative "flicker flame" neon lamps. However, while too low a current causes flickering, too high a current increases the wear of the electrodes by stimulating sputtering, which coats the internal surface of the lamp with metal and causes it to darken.

The digits of a Nixie tube.

Most small neon (indicator-sized) lamps, such as the common NE-2, break down at between 90 and 110 volts. This feature enables their use as very simple voltage regulators or overvoltage protection devices. In the 1960s General Electric (GE), Signalite, and other firms made special extra-stable neon lamps for electronic uses. They even devised digital logic circuits, binary memories, and frequency dividers using neon lamps.[7][8][9][10][11][12][13][14] Such circuits appeared in electronic organs of the 1950s, as well as some instrumentation. At least some of these lamps had a glow concentrated into a small spot on the cathode, which made them unsuited to use as indicators. These were sometimes called "circuit-component" lamps, the other variety being indicators. A variant of the NE-2 type lamp, the NE-77, had three parallel wires (in a plane) instead of the usual two. It was also intended primarily to be a circuit component.

Small neon lamps are used as indicators in electronic equipment. Called "tuneons" in 1930s radio sets, they were fitted as tuning indicators, and would give a brighter glow as the station was tuned in correctly. Larger lamps are used in neon signage. Neon lamps, due to their low current consumption, are used as nightlights. Because of their comparatively fast response time, in the early development of television neon lamps were used as the light source in many mechanical-scan TV displays. They were also used for a variety of other purposes; since a neon lamp can act as a relaxation oscillator with an added resistor and capacitor, it can be used as a simple flashing lamp or audio oscillator. (See Pearson-Anson effect.)

Neon lamps with several shaped electrodes were used as alphanumerical displays known as Nixie tubes. These have since been replaced by other display devices such as light emitting diodes, vacuum fluorescent displays, and liquid crystal displays. Novelty glow lamps with shaped electrodes (such as flowers and leaves), often coated with phosphors, have been made for artistic purposes. In some of these, the glow that surrounds an electrode is part of the design.

In AC-excited lamps, both electrodes produce light, but in a DC-excited lamp, only the negative electrode glows. Thus a neon lamp can be used to distinguish between AC and DC sources and to ascertain the polarity of DC sources.

Neon indicator lamps are normally orange, and are frequently used with a coloured filter over them to improve contrast and change their colour to red or a redder orange, or less often green.

They can also be filled with argon, krypton, or xenon rather than neon, or mixed with it. While the electrical operating characteristics remain similar, the lamps light with a bluish glow (including some ultraviolet) rather than neon's characteristic reddish-orange glow. Ultraviolet radiation then can be used to excite a phosphor coating inside of the bulb and provide a wide range of various colors, including white.[15] A mixture of neon and krypton can be used for green glow, but nevertheless "green neon" lamps are more commonly phosphor-based.