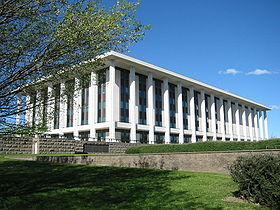 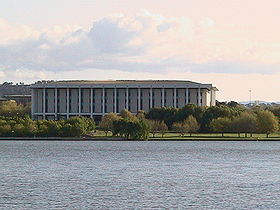 National Library of Australia as viewed from Lake Burley Griffin

The Library Committee is keeping before it the ideal of building up, for the time when Parliament shall be established in the Federal Capital, a great Public Library on the lines of the world-famed Library of Congress at Washington; such a library, indeed, as shall be worthy of the Australian Nation; the home of the literature, not of a State, or of a period, but of the world, and of all time.[2]

The present library building was opened in 1968. The foyer is decorated in marble, with stained glass windows by Leonard French and three remarkable tapestries by Mathieu Matégot.[3]

The Library contains a collection totalling 10,416,119 materials, including both physical and online reference sources.[4]The Library's collections of Australiana have developed into the nation's single most important resource of materials recording the Australian cultural heritage. Australian writers, editors and illustrators are actively sought and well represented—whether published in Australia or overseas.

The Library collects material produced by Australians, for Australians or about the Australian experience in all formats—not just printed works—books, serials, newspapers, maps, posters, music and printed ephemera—but also online publications and unpublished material such as manuscripts, pictures and oral histories. The Library has particular collection strengths in the performing arts, including dance.

The Library's considerable collections of general overseas and rare book materials, as well as world-class Asian and Pacific collections which augment the Australiana collections. The print collections are further supported by extensive microform holdings.

The Library has digitized over 140,000 items from its collection (the 100,000th being http://nla.gov.au/nla.pic-vn3409117) and, where possible, delivers these directly across the Internet. The Library is a world leader in digital preservation techniques,[6] and maintains an Internet-accessible archive of selected Australian websites called the Pandora Archive.

The Library houses the largest and most actively developing research resource on Asia in Australia, and the largest Asian language collections in the Southern hemisphere, with over half a million volumes in the collection, as well as extensive online and electronic resources. The Library collects resources about all Asian countries in Western languages extensively, and resources in the following Asian languages: Burmese, Chinese, Persian, Indonesian, Japanese, Khmer, Korean, Lao, Manchu, Mongolian, Thai, Timorese, and Vietnamese.

The Library has acquired a number of important Western and Asian language scholarly collections from researchers and bibliophiles. These collections include:

The Asian Collections are searchable.[11]

A video introduces the Asian Collections.[12]

The Australian manuscript collections date from the period of maritime exploration and settlement in the 18th century until the present, with the greatest area of strength dating from the 1890s onwards. The collection includes a large number of outstanding single items, such as the 14th century Chertsey Cartulary, the journal of James Cook on the HM Bark Endeavour, inscribed on the Memory of the World[13] Register in 2001, the diaries of Robert O'Hara Burke and William John Wills from the Burke and Wills expedition, and Charles Kingsford Smith's and Charles Ulm's log of the Southern Cross.

The large National Library building is home to various reading rooms and collections. On the ground floor is the Main Reading Room—this is where the bulk of the Library's Internet access terminals are located, and where wireless internet access is available. Services are also delivered on-site from the Petherick Reading Room (for advanced readers) on the ground floor; the Newspaper & Microforms and Map Reading Rooms on the lower-ground floor, Manuscripts and Pictures on level 2, and Asian Collections on level 3. Limited space is also available for readers at the Hume Annexe.

The National Library of Australia provides a national leadership role in developing and managing collaborative online services with the Australian library community, making it easier for users to find and access information resources at the national level. With the development of Trove, all of the National Library of Australia's resources discovery services will be integrated into the Trove service.

Picture Australia[19] is an Internet based federated search service that allows you to access many significant online pictorial collections at the same time. Over 50 cultural agencies have made in excess of 1,700,000 records from their image collections accessible through Picture Australia.

When you do a search on Picture Australia, thumbnail images are retrieved from participating institutions on the fly and inserted into the search results.[20]

Following the very strong support received in response to the prototype, it was decided to expand into a new service to include more libraries, galleries, museums, and archives.

The service was launched on 4 September 2000 by the Minister for Veterans' Affairs, Mr Bruce Scott, in a ceremony at the National Library of Australia and saw significant growth in usage almost immediately.[21] The National Archives of Australia and the University of Queensland Library also joined the service in time for the launch.

In early 2006, in an effort to increase contemporary content, Picture Australia embarked on a pilot with flickr.com.[22] The program "People, Places and Events" was successful and a new project called "Ourtown" was established to gain access to images of Australian life and to source contemporary views of historic images in the collection.

You can access Libraries Australia from home, work, school, university or from any personal computer with an internet connection.

Libraries Australia is free, easy to use, and extremely flexible. It allows users to:

Australian Newspapers[24] is a free online service enabling full-text searching of historic newspaper articles published in each state and territory from the 19th century to the mid-1950s, when copyright applies. The service is managed by the National Library of Australia, in collaboration with the Australian State and Territory libraries.

On 25 July 2008 the Australian Newspapers Beta service was released to the public. The Beta service contains over 3 million articles from 1803 onwards and more content is being added on a regular basis.[25]

PANDORA, Australia's Web Archive, is a growing collection of Australian online publications, established initially by the National Library of Australia in 1996, and now built in collaboration with nine other Australian libraries and cultural collecting organisations.

The name, PANDORA, is an acronym that encapsulates its mission: Preserving and Accessing Networked Documentary Resources of Australia.

Music Australia[26] is an online service that showcases Australia’s musical culture across contemporary and historical periods, from the earliest published music to the latest hit. It is a free resource discovery service, hosted by the National Library of Australia that helps people to find, explore and locate all types, styles and genres of Australian music – whether created, performed or published in Australia or by Australians, or associated with Australia’s musical culture.

You can access and navigate a rich store of information on Australian music, musicians, organisations and services, all from a single access point. You can find music scores, sound recordings, websites, pictures and films, multimedia, kits and objects, and archival collections and other music-related material held by a large number of Australia's cultural institutions or described by specialist music services. Music Australia covers both heritage and contemporary music, and includes all formats, styles and genres.

Some of the resources in the Directory are accessible in digital formats, such as digitised pictures. Some information is available as electronic finding aids, such as online descriptions of the contents of manuscript and ephemera collections. ScreenSound Australia holdings are described according to their first preservation formats only.

AskNow[28] is a virtual reference service of National and State Libraries Australasia (NSLA) in partnership with public libraries and is managed by the National Library of Australia. The service is staffed by more than 160 librarians in Australia and New Zealand. It aims to provide high quality information to users, with the convenience of immediate, online communication. Using purpose-built software, it allows librarians and users to interact in real time.

Australian Research Online[29] (formerly the ARROW Discovery Service) is an integrated search engine enabling users to search for Australian research outputs (e.g. theses; preprints; postprints; journal articles; book chapters; music recordings and pictures) simultaneously across the contents of Australian university and government research repositories in addition to other collections of Australian research. The records in ARO are harvested from the contributing repositories via the Open Archives Initiative-Protocol for Metadata Harvesting (OAI-PMH). Each record found through this service links back to a record in the contributing repository.

The Register of Australian Archives and Manuscripts (RAAM)[30] is a guide to collections of personal papers and non-governmental organisational records held by Australian libraries and archives. RAAM is a successor to the Guide to collections of manuscripts relating to Australia which was published by the National Library of Australia from 1965 to 1995. The project to convert the Guide to a web-accessible database was a cooperative venture initiated by the National Library with the assistance of a grant from the Towards Federation 2001 Working Group on High Priority Cross-Sectoral Projects. New records were added to the existing 6,000 entries in the Guide to create a database of 29,000 records at the time of release in October 1997. This had grown to 37,000 records by December 2000.

Maps of Australia[31] is an online database which provides a geospatial search interface for catalogue records of over 100 000 maps of Australia held in Australia's libraries, from the earliest mapping to the present. By December 2008,[32] there are about 4,000 map images (digitised maps) on Maps of Australia.

Trove is a search engine to locate resources about Australia and Australians, which reaches many locations otherwise unavailable to external search engines.[33] It is a centralised national service built with the collaboration of major libraries of Australia.[34] In the coming years all of the National Library of Australia's resource discovery services will be integrated with Trove.

The National Library is also a popular recreational and training venue for Canberra's climbing community. The use of roughly cut granite blocks in the construction of the outer walls has created numerous bouldering areas. The eastern most section of the northern wall is notably the most popular, however many other sections are also climbed. The climbing consists long traverse problems with the potential for short eliminates. Climbing of the taller sections of the library is discouraged by the management.