Daisy May Bates, CBE[1] (16 October 1859 – 18 April 1951) was an Irish Australian journalist, welfare worker and lifelong student of Australian Aboriginal culture and society. She was known among the native people as 'Kabbarli' (grandmother).

Bates was born as Margaret Dwyer in County Tipperary, Ireland in 1859. Her mother, Bridget (née Hunt), died of tuberculosis on 20 December 1862. Her father married Mary Dillon on 21 September 1864 and died in route to the United States, so Bates was raised, by relatives, in Roscrea and educated at the National School in the town.

On 22 November 1882, aged 23, she emigrated to Australia on the R.M.S. Almora, by which time she had changed her name to Daisy May O'Dwyer. Some accounts (based on Bates's own claims) say that she left Ireland for 'health reasons', but Bates's biographer Julia Blackburn discovered that, after getting her first job as a governess in Dublin at age 18, there was a scandal, presumably sexual in nature, which resulted in the young man of the house taking his own life. Bates was forced to leave Ireland and, keen to cover up her sordid past, she re-invented her history, setting a pattern for the rest of her life. It was not until long after her death that the true facts of her early life emerged.

Bates settled first at Townsville, Queensland allegedly staying first at the home of the Bishop of North Queensland and later with family friends who had migrated earlier. Bates had travelled with Ernest C. Baglehole and James C. Hann, amongst others, on the later stage of her journey. Both Baglehole and Hann had boarded at Batavia for the journey to Australia. Hann's family, through William Hann's donation of £1000, had been very generous to the construction of St James Church of England some few years before Bishop Stanton had arrived at Townsville. Bates found temporary accommodation with the Bishop. She subsequently found employment as a governess on Fanning Downs Station.

Records show that she married poet and horseman Breaker Morant (Harry Morant aka Edwin Murrant) on 13 March 1884; the union lasted only a short time and Bates reputedly threw Morant out because he failed to pay for the wedding and stole some livestock. Significantly, they were never divorced. Morant's biographer Nick Bleszynski suggests that Bates played a more important role in Morant's life than has been previously thought, and that it was she who convinced him to change his name from Edwin Murrant to Harry Harbord Morant.

Soon after her failed marriage to Morant, Bates moved to New South Wales. She said that she became engaged to Philip Gipps but he died before they could marry. This is probably fantasy. She then met John (Jack) Bates and they married on 17 February 1885; like Morant, he was a breaker of wild horses, bushman and drover. The bigamous nature of their marriage was kept secret during Bates's lifetime. She also found time to marry Ernest C. Baglehole on 10 June 1885 at St Stephen's near Sydney. Although he is shown as being a seaman he was the son of a wealthy London family and had become a ship's officer after completing an apprenticeship and this might have been an attraction for Daisy. She first met Baglehole when he was one of 6 passengers who came aboard "The Almora" at Batavia and presumably he had left his ship there and was on his way to join another in Australia.

Their only child, Arnold Hamilton Bates, was born in Bathurst, New South Wales on 26 August 1886. The marriage was not a happy one, probably because Jack, being a drover and bushman, was away for long periods. In February 1894, Bates returned to England, telling Jack that she would only return when he had a home established for her. She arrived in England penniless but eventually found a job as a journalist. It was not until 1899 that she heard from her husband again, who wrote saying that he was looking for a property in Western Australia.[citation needed]

At about this time a letter was published in The Times about the cruelty of West Australian settlers to Aborigines. As Bates was preparing to return to Australia, she wrote to The Times offering to make full investigations and report the results to them. Her offer was accepted and she sailed back to Australia in August 1899. In all, Bates devoted more than 35 years of her life to studying Aboriginal life, history, culture, rites, beliefs and customs. Living in a tent in small settlements from Western Australia to the edges of the Nullarbor Plain, notably at Ooldea in South Australia, she researched and wrote millions of words on the subject. She was also famed for her strict lifelong adherence to Edwardian fashion, including boots, gloves and a veil.[citation needed]

She also worked tirelessly for Aboriginal welfare, setting up camps to feed, clothe and nurse the transient population, drawing on her own income to meet the needs of the aged. She fought against the policy of having native people assimilated into white Australian society and resisted the sexual exploitation of Aboriginal women by white men. She was said to have worn pistols even in her old age and to have been quite prepared to use them to threaten police when she caught them mistreating 'her' Aborigines.

In spite of her fascination with their way of life, Bates was convinced that the Australian Aborigines were a dying race and that her mission was to record as much as she could about them before they disappeared. She dismissed people of part Aboriginal descent as worthless and wrote in the Perth Sunday Times on 12 June 1921, 'As to the half-castes, however early they may be taken and trained, with very few exceptions, the only good half-caste is a dead one.'[2]

On her return voyage she met Father Dean Martelli, a Roman Catholic priest who had worked with Aborigines and who gave her an insight into the conditions they faced. She found a school and home for her son in Perth, invested some of her money in property as a security for her old age, bought note books and supplies and left for the state's remote north-west to gather information on Aborigines and the effects of white settlement.

She wrote articles about conditions around Port Hedland and other areas for geographical society journals, local newspapers and The Times. This experience kindled her life-long interest in the lives and welfare of Aboriginal people in Western and South Australia.

Based at the Beagle Bay Mission near Broome, Bates, now thirty-six, began her life's work. Her accounts, among the first attempts at a serious study of Aboriginal culture, were published in the Journal of Agriculture and later by anthropological and geographical societies in Australia and overseas.

While at the mission she also compiled a local dictionary of several dialects, comprising some two thousand words and sentences, as well as notes on legends and myths. In April 1902 Bates, accompanied by her son and her husband, set out on a droving trip from Broome to Perth. It provided good material for her articles but after spending six months in the saddle and travelling four thousand kilometres, Bates knew that her marriage was over.

Following her final separation from Bates in 1902, she spent most of the rest of her life in outback Western and South Australia, studying and working for the remote Aboriginal tribes, who were being decimated by the incursions of European settlement and the introduction of modern technology, western culture and exotic diseases.

In 1904, the Registrar General's Department of Western Australia appointed her to research Aboriginal customs, languages and dialects, a task which took nearly six years to compile and arrange the data. Many of her papers were read at Geographical and Royal Society meetings. 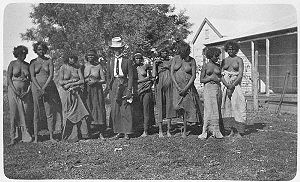 Bates and a group of Aboriginal women, circa 1911

In 1910-11 she accompanied anthropologist A. R. Brown (later Professor Alfred Radcliffe-Brown) and writer and biologist E. L. Grant Watson on a Cambridge ethnological expedition to inquire into Western Australian marriage customs. She was appointed a 'Travelling Protector' with a special commission to conduct inquiries into all native conditions and problems, such as employment on stations, guardianship and the morality of native and half-caste women in towns and mining camps.

Bates later came into conflict with Radcliffe-Brown because she sent him her manuscript report of the expedition. Much to Bates's chagrin, it was not returned for many years and when it came back it was heavily annotated with Radcliffe-Brown's critical remarks. The conflict culminated in a famous incident at a symposium, where Bates accused Radcliffe-Brown of plagiarism—Bates was scheduled to speak after Radcliffe-Brown had presented his paper, but when she rose it was only to compliment him sarcastically on his presentation of her work, after which she resumed her seat.

A "Protector of Aborigines"

The same year she became the first woman ever to be appointed Honorary Protector of Aborigines at Eucla. During the sixteen months she spent there, Bates changed from a semi-professional scientist and ethnologist to a staunch friend and protector of the Aborigines, deciding to live among them and look after them, and to observe and record their lives and lifestyle.

Bates stayed at Eucla until 1914, when she travelled to Adelaide, Melbourne and Sydney to attend the Science Congress of the Association for the Advancement of Science. Before returning to the desert, she gave lectures in Adelaide which aroused the interests of several women's organisations.

During her years at Ooldea she financed the supplies she bought for the Aborigines from the sale of her property. To maintain her income she wrote numerous articles and papers for newspapers, magazines and learned societies. Through journalist and author Ernestine Hill, Bates's work was introduced to the general public, although much of the publicity tended to focus on her sensational stories of cannibalism.

In August 1933 the Commonwealth Government invited Bates to Canberra to advise on Aboriginal affairs. The next year she was created a Commander of the Order of the British Empire by King George V. More important to Bates was the opportunity to put her work in print.

She left Ooldea and went to Adelaide where, with the help of Ernestine Hill, she produced a series of articles for leading Australian newspapers, titled My Natives and I.

Aged seventy-one, she still walked every day to her office at The Advertiser building. Later the Commonwealth Government paid her a stipend of $4 a week to assist her in putting all her papers and notes in order and prepare her manuscript. But with no other income it was impossible for her to remain in Adelaide so she moved to the village settlement of Pyap on the Murray River where she pitched her tent and set up her typewriter.

In 1938, she published The Passing of the Aborigines which caused controversy due to its claims of cannibalism

In 1941 she went back to her tent life at Wynbring Siding, east of Ooldea, and she remained there on and off until her health forced her back to Adelaide in 1945.

In 1918 she tried, through the Australian Army, to contact her son Arnold, who by then was serving in France. Later, in 1949, she contacted the Army again, through the RSL, in an effort to communicate with him. Arnold was living in New Zealand but refused to have anything to do with his mother.

Daisy Bates died on 18 April 1951, aged 91. She is buried at Adelaide's North Road Cemetery. An episode in her life was the basis for Margaret Sutherland's chamber opera The Young Kabbarli (1964) and her involvement with the aboriginal people is the basis for the 1983 lithograph The Ghost of Kabbarli by Susan Dorothea White.