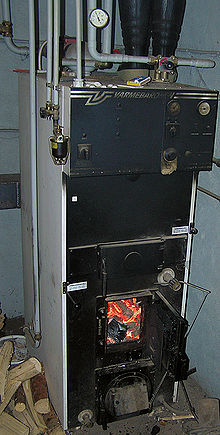 A central heating system provides warmth to the whole interior of a building (or portion of a building) from one point to multiple rooms. When combined with other systems in order to control the building climate, the whole system may be a HVAC (heating, ventilation and air conditioning) system.

Central heating differs from local heating in that the heat generation occurs in one place, such as a furnace room in a house or a mechanical room in a large building (though not necessarily at the "central" geometric point). The most common method of heat generation involves the combustion of fossil fuel in a furnace or boiler. The resultant heat then gets distributed: typically by forced-air through ductwork, by water circulating through pipes, or by steam fed through pipes. Increasingly, buildings utilize solar-powered heat sources, in which case the distribution system normally uses water circulation.

In much of northern Europe and in urban portions of Russia, where people seldom require air conditioning in homes due to the temperate climate, most new housing comes with central heating installed. Such areas normally use gas heaters, district heating, or oil-fired systems. In the western and southern United States natural-gas-fired central forced-air systems occur most commonly; these systems and central-boiler systems both occur in the far northern regions of the USA. Steam-heating systems, fired by coal, oil or gas, feature in the USA, Russia and Europe: primarily for larger buildings. Electrical heating systems occur less commonly and are only practical with low cost electricity or when geothermal heat pumps are used. Considering the combined system of central generating plant and electric resistance heating, the overall efficiency will be less than for direct use of fossil fuel for space heating.

The Summer Palace of Peter the Great in St. Petersburg, one of the first buildings to incorporate the modern-type hydrologic central heating

Some buildings in the Roman Empire used central heating systems, conducting air heated by furnaces through empty spaces under the floors and out of pipes in the walls — a system known as a hypocaust.[1] A similar system of central heating was used in ancient Korea, where it is known as ondol. It is thought that the ondol system dates back to the Koguryo or Three Kingdoms (37 BC-AD 668) period when excess heat from stoves were used to warm homes.

In the early medieval Alpine upland, a simpler central heating system where heat travelled through underfloor channels from the furnace room replaced the Roman hypocaust at some places. In Reichenau Abbey a network of interconnected underfloor channels heated the 300 m² large assembly room of the monks during the winter months. The degree of efficiency of the system has been calculated at 90%.[2]

In the 13th century, the Cistercian monks revived central heating in Christian Europe using river diversions combined with indoor wood-fired furnaces. The well-preserved Royal Monastery of Our Lady of the Wheel (founded 1202) on the Ebro River in the Aragon region of Spain provides an excellent example of such an application.

The Roman hypocaust continued to be used on a smaller scale during late Antiquity and by the Umayyad caliphate, while later Muslim builder employed a simpler system of underfloor pipes.[3]

By about 1700 Russian engineers had started designing hydrologically based systems for central heating. The Summer Palace (1710–1714) of Peter the Great in Saint Petersburg provides the best extant example. Slightly later, in 1716, came the first use of water in Sweden to distribute heat in buildings. Martin Triewald, a Swedish engineer, used this method for a greenhouse at Newcastle upon Tyne. Jean Simon Bonnemain (1743–1830), a French architect,[4] introduced the technique to industry on a cooperative, at Château du Pêcq, near Paris.

Angier March Perkins developed and installed some of the earliest steam-heating systems in the 1830s. The first was installed in the home of Governor of the Bank of England John Horley Palmer so that he could grow grapes in England's cold climate.[5]

Franz San Galli, a Polish-born Russian businessman living in St. Petersburg, invented the radiator between 1855-1857, which was a major step in the final shaping of modern central heating.[6][7]

Common components of a central heating system using water-circulation include:

Engineers in the United Kingdom and in other parts of Europe commonly combine the needs of room heating with hot-water heating and storage. These systems occur less commonly in the USA. In this case, the heated water in a sealed system flows through a heat exchanger in a hot-water tank or hot-water cylinder where it heats water from the normal water supply before that water gets fed to hot-water outlets in the house. These outlets may service hot-water taps or appliances such as washing machines or dishwashers. 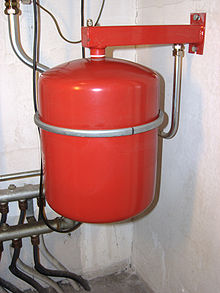 A sealed system provides a form of central heating in which the water used for heating usually circulates independently of the building's normal water supply. An expansion tank contains compressed gas, separated from the sealed-system water by a diaphragm. This allows for normal variations of pressure in the system. A safety valve allows water to escape from the system when pressure becomes too high, and a valve can open to replenish water from the normal water supply if the pressure drops too low. Sealed systems offer an alternative to open-vent systems, in which steam can escape from the system, and gets replaced from the building's water supply via a feed and central storage system.

Electric heaters are usually part of a fan coil which is part of a central air conditioner. They circulate heat by blowing air across the heating element which is supplied to the furnace through return air ducts. Blowers in electric furnaces move air over one to five resistance coils or elements which are usually rated at five kilowatts. The heating elements activate one at a time to avoid overloading the electrical system. Overheating is prevented by a safety switch called a limit controller or limit switch. This limit controller may shut the furnace off if the blower fails or if something is blocking the air flow. The heated air is then sent back through the home through supply ducts.

In larger commercial applications, central heating is provided through an air handler which incorporates similar components as a furnace but on a larger scale.

Hydronic heating systems are systems that circulate a medium for heating. Hydronic radiant floor heating systems use a boiler or district heating to heat water and a pump to circulate the hot water in plastic pipes installed in a concrete slab. The pipes, embedded in the floor, carry heated water that conducts warmth to the surface of the floor where it broadcasts heat energy to the room above.

Hydronic systems circulate hot water for heating. Steam heating systems are similar to heating water systems, except steam is used as the heating medium instead of water.

In mild climates a heat pump can be used to air condition the building during hot weather, and to warm the building using heat extracted from outdoor air in cold weather. Air-source heat pumps are generally uneconomic for outdoor temperatures much below freezing. In colder climates, geothermal heat pumps can be used to extract heat from the ground. For economy, these systems are designed for average low winter temperatures and use supplemental heating for extreme low temperature conditions. The advantage of the heat pump is that it reduces the purchased energy required for building heating; often geothermal source systems also supply domestic hot water. Even in places where fossil fuels provide most electricity, a geothermal system may offset greenhouse gas production since most of the energy furnished for heating is supplied from the environment, with only 15–30% purchased.

From an energy-efficiency standpoint considerable heat gets lost or goes to waste if only a single room needs heating, since central heating has distribution losses and (in the case of forced-air systems particularly) may heat some unoccupied rooms without need. In such buildings which require isolated heating, one may wish to consider non-central systems such as individual room heaters, fireplaces or other devices. Alternatively, architects can design new buildings to use low-energy building techniques which can virtually eliminate the need for heating, such as those built to the Passive House standard.

However, if a building does need full heating, combustion central heating offers a more environmentally friendly solution than electric-air central heating or than other direct electric heating devices. This stems from the fact that most electricity originates remotely using fossil fuels, with up to two-thirds of the energy in the fuel lost (unless utilized for district heating) at the power station and in transmission losses. In Sweden proposals exist to phase out direct electric heating for this reason (see oil phase-out in Sweden). Nuclear and hydroelectric sources reduce this factor.

In contrast, hot-water central heating systems can use water heated in or close to the building using high-efficiency condensing boilers, biofuels, or district heating. Wet underfloor heating has proven ideal. This offers the option of relatively easy conversion in the future to use developing technologies such as heat pumps and solar combisystems, thereby also providing future-proofing.