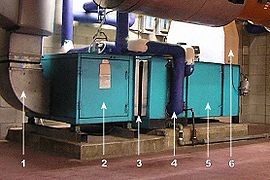 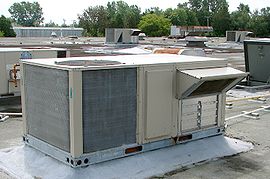 A rooftop packaged unit or RTU

An air handler, or air handling unit (often abbreviated to AHU), is a device used to condition and circulate air as part of a heating, ventilating, and air-conditioning (HVAC) system. An air handler is usually a large metal box containing a blower, heating or cooling elements, filter racks or chambers, sound attenuators, and dampers. Air handlers usually connect to ductwork that distributes the conditioned air through the building and returns it to the AHU. Sometimes AHUs discharge (supply) and admit (return) air directly to and from the space served without ductwork.

Small air handlers, for local use, are called terminal units, and may only include an air filter, coil, and blower; these simple terminal units are called blower coils or fan coil units. A larger air handler that conditions 100% outside air, and no recirculated air, is known as a makeup air unit (MAU). An air handler designed for outdoor use, typically on roofs, is known as a packaged unit (PU) or rooftop unit (RTU).

Air handlers typically employ a large squirrel cage blower driven by an AC induction electric motor to move the air. The blower may operate at a single speed, offer a variety of set speeds, or be driven by a Variable Frequency Drive to allow a wide range of air flow rates. Flow rate may also be controlled by inlet vanes or outlet dampers on the fan. Some residential air handlers (central 'furnaces' or 'air conditioners') use a brushless DC electric motor that has variable speed capabilities.

Multiple blowers may be present in large commercial air handling units, typically placed at the end of the AHU and the beginning of the supply ductwork (therefore also called "supply fans"). They are often augmented by fans in the return air duct ("return fans") pushing the air into the AHU.

Air handlers may need to provide heating, cooling, or both to change the supply air temperature depending on the location and the application.

Smaller air handlers may contain a fuel-burning heater or a refrigeration evaporator, placed directly in the air stream. Electric resistance and heat pumps can be used as well. Evaporative cooling is possible in dry climates.

Large commercial air handling units contain coils that circulate hot water or steam for heating, and chilled water for cooling. Coils are typically manufactured from copper for the tubes, with copper or aluminium fins to aid heat transfer. Cooling coils will also employ eliminator plates to remove and drain condensate. The hot water or steam is provided by a central boiler, and the chilled water is provided by a central chiller. Downstream temperature sensors are typically used to monitor and control 'off coil' temperatures, in conjunction with an appropriate motorized control valve prior to the coil.

Air filtration is almost always present in order to provide clean dust-free air to the building occupants. It may be via simple low-MERV pleated media, HEPA, electrostatic, or a combination of techniques. Gas-phase and ultraviolet air treatments may be employed as well.

It is typically placed first in the AHU in order to keep all its components clean. Depending upon the grade of filtration required, typically filters will be arranged in two (or more) banks with a coarse-grade panel filter provided in front of a fine-grade bag filter, or other 'final' filtration medium. The panel filter is cheaper to replace and maintain, and thus protects the more expensive bag filters.

The life of a filter may be assessed by monitoring the pressure drop through the filter medium at design air volume flow rate. This may be done by means of a visual display, using a pressure gauge, or by a pressure switch linked to an alarm point on the building control system. Failure to replace a filter may eventually lead to its collapse, as the forces exerted upon it by the fan overcome its inherent strength, resulting in collapse and thus contamination of the air handler and downstream ductwork.

Humidification is often necessary in colder climates where continuous heating will make the air drier, resulting in uncomfortable air quality and increased static electricity. Various types of humidification may be used:

In order to maintain indoor air quality, air handlers commonly have provisions to allow the introduction of outside air into, and the exhausting of air from the building. In temperate climates, mixing the right amount of cooler outside air with warmer return air can be used to approach the desired supply air temperature. A mixing chamber is therefore used which has dampers controlling the ratio between the return, outside, and exhaust air.

A heat recovery device heat exchanger of many types, may be fitted to the air handler between supply and extract airstreams for energy savings and increasing capacity. These types more commonly include for:

Controls are necessary to regulate every aspect of an air handler, such as: flow rate of air, supply air temperature, mixed air temperature, humidity, air quality. They may be as simple as an off/on thermostat or as complex as a building automation system using BACnet or LonWorks, for example.

The blowers in an air handler can create substantial vibration and the large area of the duct system would transmit this noise and vibration to the occupants of the building. To avoid this, vibration isolators (flexible sections) are normally inserted into the duct immediately before and after the air handler and often also between the fan compartment and the rest of the AHU. The rubberized canvas-like material of these sections allow the air handler to vibrate without transmitting much vibration to the attached ducts.

The fan compartment can be further isolated by placing it on a spring suspension, which will mitigate the transfer of vibration through the floor.

The European market of air handling units (AHU) is dominated by Germany and the Northern Countries, where are located the main manufacturers, and reaches a total of 1 343.06M€. The number of units sold, by range of capacity, is split as following [1]:

The market by country is split in 2010 as following: