Bristol Grammar School is a co-educational independent school in Clifton, Bristol, England. The school was founded in 1532 by two brothers, Robert and Nicholas Thorne.

The school's current Headmaster, Roderick MacKinnon, is a member of the Headmasters' and Headmistresses' Conference.

The modern school is in three separate sections: the Infant and Junior School takes children from the ages of 4 to 11, the Senior School is for students aged between 11 and 16 studying for GCSEs, and the Sixth Form is for students from 16 to 18 studying for their 'A' levels. There are around 1,130 children in the school, of which around 40 percent are girls, since its switch from boys-only to co-educational in 1980.

The school was founded in 1532 by two brothers, Robert and Nicholas Thorne, when it was housed in the St Bartholomew's Hospital, as part of the new founding of schools after Henry VIII's closure of the monasteries, where previously a large proportion of England's education had occurred. The school motto Ex Spinis Uvas, which translates as "From Thorns Grapes", is a play upon the names of the school founders Robert and Nicholas Thorne.

The school became a direct grant grammar school in 1946[1] as a result of the Education Act 1944 and chose to become independent when direct grants were abolished by the 1974–9 Labour Government.[2]

The Grammar School over the Frome Gate was in the care of its first schoolmaster, Thomas Moffat, when good fortune stepped in to secure its future. The Thorne family were wealthy Bristol merchants, friends of men like John Cabot and known to royalty. They wished to endow a school where the sons of Bristol merchants and tradesmen could receive a good education before settling down to the important business of making money. On 17 March 1532, Henry VIII issued a Charter under which the Thornes could endow the Grammar School and establish it in larger premises at St Bartholomew's Hospital near the bottom of Christmas Steps. There the boys learnt Latin and Greek, Divinity and some Hebrew.

By 1767, the buildings were too cramped. Charles Lee, the Master, persuaded the Corporation that the Grammar School should be allowed to exchange premises with the other City School, Queen Elizabeth's Hospital, which had a pleasant, new site on Unity Street, further up the hill. This exchange was carried out, and Charles Lee proceeded to enjoy his new School by greatly reducing the numbers of boys. The School was set to rights in 1812, but education was moving away from the classics and this caused further problems resulting in the school being closed in 1844. It received a new Scheme in 1847 and re-opened in January 1848 with 300 pupils.[3] 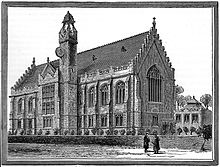 By 1870 the headmaster (Rev John William Caldicott) told the Endowed Schools Commission that the school was "full to overflowing" with 240 boys and very successful with university entries. However, it was significantly less well endowed than Bristol's other secondary schools (Queen Elizabeth's, Red Maids' and Colston's), and its now dilapidated buildings were located in the wrong area of the city for pupils who mostly lived in Clifton and Redland.[4] At that time, Bristol had substantial hospital endowments (second only to London and Edinburgh) but these were mostly spent on charity rather than education. The assistant charity commissioner proposed a scheme that would reorganise the objectives of the endowed schools and secure funding for the Grammar School and the new Clifton High School for Girls. After several years of debate and negotiation the initiative was approved in 1875,[5] and in 1877 a new location in Tyndalls Park was agreed.

The first buildings in Tyndalls Park were occupied in 1879: the Big School, with its remarkable Great Hall, and the Headmaster’s House, a modest dwelling which is now the Junior School. Further classrooms were added, a Gymnasium and a Fives Court and a Rifle Range. These have been rebuilt as art rooms and rehearsal rooms, but the Winterstoke wing still houses the Laboratories which were added in 1914. The Preparatory School began in 1900, and in 1928 moved into its own building on Elton Road, but this was destroyed on the night of 24 November 1940 by incendiary bombs.

The Prep Hall, which survived, is now the Mackay Theatre. The Elton Road ruin was rebuilt as classrooms under John Garrett, who added the University Road block and began to colonise the other side of Elton Road. Since then, the School has built yet more classroom accommodation and a new Sports Hall; Modern Languages, Classics/Geography, Art and Music have their own Elton Road Houses, and the former playing field is now the Technology Centre.

There are six Houses in the Senior School, each named after its Head of House. Each student is placed in one of the six different House groups at the beginning of their time in the Senior School and remains in the House until they leave the school. House activities include House Plays, music competitions and inter-House sporting tournaments. The school will always place students in the same Houses as any previous family members who have come to the school.

The House names and colours are:

House colours are also awarded, given at the end of the particular term should that person take part and perform particularly well in a given activity or sporting event.

School colours are awarded to pupils typically in their final year, who perform exceptionally well in sport or any other school activity. They would be expected to compete in a school team (such as cricket, Rugby, hockey or football) and show continued commitment. This was extended to include performing arts, awarding several students colours for their contribution to concerts, plays and taking House assemblies.

The size of teaching groups ranges from 25 students per teacher in lower years to occasionally one per teacher (for less popular subjects in the sixth form). Optional subjects include Russian and Economics. Today, all students have access to computers with internet access.

The school offers Ancient Greek as a subject from Year 9 onwards, and Classical Civilisation is also available now as a GCSE.

The school owns a small area of land in Failand which features an AstroTurf hockey/netball pitch, tarmac tennis courts and multiple cricket pitches which are swapped around season to season to rugby pitches. There is also an athletics track as well as shot and javelin areas marked out. Full time grounds staff are employed to keep the area at its best and sport is compulsory one afternoon a week for every year-group up to, and including, year 11. A new pavilion has been built as part of the 475th Anniversary expansion of the school, replacing the old pavilion. There is now a larger car park and better coach access. The new pavilion provides facilities for up to 350 pupils and staff at a time with improved showering and changing facilities as well as an attractive hospitality area for spectators. The total cost of the project will be £2.4 million.

This is in addition to the sports hall on the Tyndall's Park campus, which supplements the one afternoon a week pupils spend doing sport with around another hour or so a week of PE within the school day.

Main entrance to the school

Bristol Grammar School occupies a triangle of land between the University of Bristol on the University Road side, what used to be Dingle's department store on the lower side and a series of houses on the Elton Road side known as Tyndalls Park. The school has been expanding of late, and while it has always owned all the houses to one side of the main campus until recently only four (Barton's, Norwood's, Martin's and Garrett's) were occupied. Lately, two or more have been converted into specialist subject areas. The School is waiting for the leases (which date from before the current Rent Act) to be relinquished by the tenants before they can use other buildings.

The school has a theatre and extensive IT facilities, as well as large playing fields outside Bristol in Failand. New school buildings have been erected in recent times, but despite the introduction of modern technology, the external appearance and locations of many of the classrooms has remained unchanged for a long time.

The foundation stone was laid on 10 June 1877. The school moved here during 1879 and it is the largest first floor hall in the United Kingdom. In 1996, the old servery was removed and the hall was restored to its old layout; the roof was also renewed during this time. There is a full kitchen between the Great Hall and the Science Wing, as well as two classrooms and an office belonging to the history department. Underneath the Great Hall is the Staff Room, the Pople Room, and the school offices. It has been designated by English Heritage as a grade II listed building.[6]

To one side of the Great Hall, sitting separate from the Hall itself and the Junior School, is another building designed to blend in. During the 1940s/1950s, this was the woodworking department, and later a staff work room. It is now a Music room which is also used for House Assemblies. The Great Hall foundation stone has never been found. Inside the foundation stone there is a time capsule, reported to contain "Copies of The Times and of the Bristol newspapers and a parchment document containing an account of the ceremony". However, despite extensive searches of the outer walls, it has not been found to date. One of two possibilities exist: 1) That the foundation stone was placed at the far end of the building where the Science wing now is, and was destroyed or covered up when that building was erected; or 2) that the stone is buried under tarmac towards the front of the building. The foundation stone was laid on the 10th of June 1877. 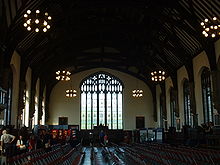 This Big School was designed in the late Perpendicular Gothic style, by the Bristol firm of Foster and Wood. Sometimes known as the Long Room, but now usually as the Great Hall, it was designed as a teaching room, and the Masters’ stalls are still in place.

The room is 140 feet (43 m) long, 50 feet (15 m) wide and 50 feet (15 m) high. Downstairs there are now, as in 1879, the Headmaster’s Study, the Senior Common Room, offices and classrooms. Originally these would have accommodated the Sixth Form, while the rest of the School had lessons together in the Hall.

The organ, which was built by Vowles & Son of St James’ Square, was presented by Mr W H Wills, later Lord Winterstoke, in January 1880. It cost over £1,000 and it is still played for assemblies and concerts.[7]

The main stairs leading out of the Great Hall have been recently modified to fulfil fire and safety regulations and in preparation for the new library and Sixth Form building known as The Hub. When the whole school assembled in the Great Hall for the official opening of the new staircase, the invited guests included people who donated large sums of money to help get the project on its way and some of the OBs, including John Pople, who have supported the school over the years. The work was allowed to be completed because of work done by the schools archivist who demonstrated that this was the way that the original staircase was likely to have been. This satisfied authorities to grant permission to make structural alterations to the Grade II listed building.

The school song is mainly sung at the end of term assembly or on special occasions.

Until the 19th century, the Headmaster was known simply as the "Master" and his assistants as "Ushers". Little is known of those of the 16th century and nothing of any before Thomas Moffat, the "scolemaster" of the City Audit Book of 1532 who took the School to the Bartholomews. The first few dates are conjectural.