Glechoma hederacea (syn. Nepeta glechoma Benth., Nepeta hederacea (L.) Trevir.) is an aromatic, perennial, evergreen creeper of the mint family Lamiaceae. It is commonly known as Ground-ivy, gill-over-the-ground or Creeping Charlie. It has numerous medicinal uses, and is commonly used as a tasty salad green in many countries. European settlers carried it around the world, and it has become a well established naturalized/introduced plant in a wide variety of localities.

Glechoma hederacea is native to Europe and southwestern Asia but has been introduced to North America and is now common in most regions other than the Rocky Mountains. Its common names include Alehoof, Creeping Charlie (or Charley), Catsfoot (from the size and shape of the leaf), Field Balm, Run-away-robin,[1] Ground Ivy, Gill-over-the-ground,[1] and Tunhoof. It is also sometimes known as Creeping Jenny, but that more commonly refers to Lysimachia nummularia. It can be identified by its round to reniform (kidney or fan shaped), crenate (with round toothed edges) opposed leaves 2–3 cm diameter, on 3–6 cm long petioles attached to square stems which root at the nodes. It is a variable species, its size being influenced by environmental conditions, from 5 cm up to 50 cm tall.

Glechoma is sometimes confused with common mallow or Malva neglecta, which also has round, lobed leaves; but mallow leaves are attached to the stem at the back of a rounded leaf, where ground ivy has square stems and leaves which are attached in the center of the leaf, more prominent rounded lobes on their edges, attach to the stems in an opposite arrangement, and have a hairy upper surface. In addition, mallow and other creeping plants sometimes confused with ground ivy do not spread from nodes on stems. In addition, ground ivy emits a distinctive odor when damaged, being a member of the mint family.

The flowers of Glechoma are bilaterally symmetrical, funnel shaped, blue or bluish-violet to lavender, and grow in opposed clusters of 2 or 3 flowers in the leaf axils on the upper part of the stem or near the tip. It usually flowers in the spring.

Glechoma thrives in moist shaded areas, but also tolerates sun very well. It is a common plant in grasslands and wooded areas or wasteland. It also thrives in lawns and around buildings since it survives mowing. It spreads by stolons or by seed. Part of the reason for its wide spread is this rhizomatous method of reproduction. It will form dense mats which can take over areas of lawn, and thus can be considered potentially invasive or aggressive weed.[1] 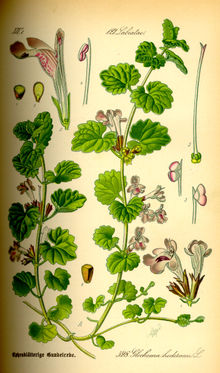 Glechoma is quite attractive. It is grown as a potted plant and occasionally as a ground cover. Easily cultivated, it grows well in shaded places. A variegated variety is commercially available; in many areas this is the dominant form which has escaped cultivation and become established as an aggressive, adventitious ground cover.

While often thought of as a weed because of its propensity for spreading, Glechoma has culinary and medicinal uses which were the cause of its being imported to America by early European settlers. The fresh herb can be rinsed and steeped in hot water to create an herbal tea which is rich in vitamin C. It has a distinctive, mildly peppery flavor; it can be cooked as a pot herb, although it is most commonly eaten as a fresh salad green.[6]

Glechoma was also widely used by the Saxons in brewing beer as flavoring, clarification, and preservative, before the introduction of hops for these purposes; thus the brewing-related names, Alehoof, Tunhoof, and Gill-over-the-ground.

Glechoma has been used in the cheese-making process as a substitute for animal rennet.[7] 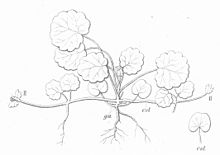 Glechoma hederacea has been used in the traditional medicine of Europe going back thousands of years. Galen recommends the plant to treat inflammation of the eyes. John Gerard, an English herbalist, recommended the plant to treat tinnitus, as well as a "diuretic, astringent, tonic and gentle stimulant. Useful in kidney diseases and for indigestion." It is also useful as a "lung herb".[8] Other traditional uses include as an expectorant, astringent, and to treat bronchitis.[9]Rosmarinic acid analogues /compounds in Glechoma hederacea var. longituba have shown inhibitioon of NF-κB production and the induction of COX-2 and iNOS mRNA in HepG2 cells.[10]

The essential oil of the plant has many potent medicinal properties; the plant has been used for centuries as a general tonic for colds and coughs, and to relieve congestion of the mucous membranes. The plant has been demonstrated by studies in rats and mice to have anti-inflammatory properties.[9] Many of the components of the essential oil have been studied individually and found to have various effects, including protecting against the formation of ulcers. One component, ursolic acid, was found in vitro to have antiviral activity against the Epstein-Barr virus.[9]

Although it has been used as a salad green and in herbal medicines for thousands of years, the safety of Glechoma hederacea has not been established scientifically, and there is sufficient evidence to warrant caution with its use.[citation needed] Cases of poisoning in cattle and horses have been documented.[citation needed] Glechoma hederacea is known to contain terpenoids; terpene-rich volatile oils are known to irritate the gastrointestinal tract and kidneys. The volatile oil also contains pulegone, a chemical also occurring in pennyroyal that is a known irritant, toxic to the liver, and also an abortifacient. The total yield of volatile oil in Glechoma is less than 1/30th the concentration that of pennyroyal.[9]

As is often the case when a plant has this many familiar names, Glechoma is familiar to a large number of people as a weed, a property it shares with many others of the mint family. It can be a problem in heavy, rich soils with good fertility, high moisture, and low boron content. It thrives particularly well in shady areas where grass does not grow well, although it can also be a problem in full sun.

Small infestations can be controlled through hand weeding; repeated weeding is required because the plant is stoloniferous and will continue to spread from its roots or bits of stem which reroot.

Glechoma is unusually sensitive to boron, and can be killed by applying borax (sodium tetraborate) in solution. The ratio is eight to ten ounces of borax dissolved in four ounces of warm water, diluted to 2.5 U.S. gallons of final solution, to be sprayed evenly over precisely 1,000 square feet (100 m2) of lawn "no more, no less". Note that despite being a "natural" treatment, boron is toxic to other plants and to animals at only slightly higher concentrations and, being an element, does not break down; therefore the long term effects of this technique on soil or groundwater, although not well documented, can be assumed to be unfavorable.[11][12] More recent research discounts the efficacy of borax, primarily because finding the correct concentration for a given area is difficult and the potential for damaging desired plants.[13]

Aside from mechanical removal or borax treatment, the other alternative for Glechoma infestation is use of commercial herbicides. There is some disagreement over the effectiveness of various herbicides, with dicamba (Trimec and Weed-B-Gon) and 2,4-D being described variously as both effective and ineffective by different sources. Some or all of the disagreement may be due to the existence of subpopulations which have differing susceptibilities to different compounds, as well as to differing rates of application. To avoid generating herbicide resistance, the same product should not be used several years in succession; rather, various products should be used in rotation. Triclopyr has also been described as effective, and Clopyralid, MCPP, and quinclorac as ineffective. Fluroxypyr and Confront have also been described as effective, but sales of both are restricted to professionals. Two applications ten to fourteen days apart are necessary; also, the ability of the surviving plants to regenerate after 24 days can require a second treatment four or five weeks later, and even more followups.

In addition, the timing of application may play a role in the effectiveness of the herbicide, as well as the perception of effectiveness. For instance, fall is usually the best time for use of broadleaf herbicides; however a slow acting herbicide like triclopyr applied in the fall may not appear to have been effective until the next growing season.

Other techniques reported effective are to fertilize with greater than two pounds of nitrogen per thousand square feet annually, and use of the preemergence herbicide, isoxaben. In extremely difficult cases, a short-lived full-spectrum herbicide such as Roundup is used to kill the entire lawn, and it is reseeded from start.