Swimming at the 2008 Summer Olympics

Swimming at the 2008 Summer Olympics

Swimming at the 2008 Summer Olympics was held over a thirteen day period from August 9 to August 21, with the conventional events ending on August 17 and the new marathon 10 km events being held on August 20 and 21. All swimming events (except the two marathon 10 km events) took place at the Beijing National Aquatics Center.

All the swimming, synchronized swimming, and diving events of the 2008 Olympics were held at the Beijing National Aquatics Center (better known as the "Water Cube"), which was claimed to be built to increase the speed of the swimmers.[1] The main pool is about 10 feet (3.0 m) deep, 3 feet (0.91 m) deeper than any other Olympic pool.[1] The lane lines, nicknamed "wave eaters", buffer the waves produced by swimmers while they stroke.[1] The technological advances of the pool were enhanced by several advantages inherent to an indoor swimming venue, namely: temperature, humidity and lighting control. Even the wide decks were built to help give the swimmers a sense of space.[1] 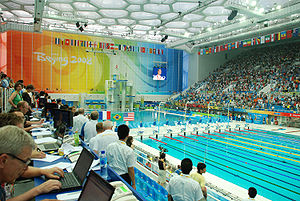 The swimming program for 2008 was expanded from 2004, with the addition of the 10 km marathon open water swimming events, bringing the total number of events to 34 (17 each for men and women). The following events were contested:[2]

For the order of events, please see

A National Olympic Committee (NOC) may enter up to 2 qualified athletes in each individual event if both meet the A standard, or 1 athlete per event if they meet the B standard. An NOC may also enter a maximum of 1 qualified relay team per event.

An NOC may enter up to 1 swimmer per sex (2 total), if they have no swimmers meeting any qualifying B standard.

For further specifics on the qualifying process, please see: 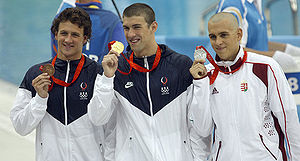 Ryan Lochte (left), Michael Phelps (middle) of the United States and László Cseh of Hungary hold their medals on the podium on August 10, 2008.

* Swimmers who participated in the heats only and received medals.

* Swimmers who participated in the heats only and received medals.

At the 2008 Summer Olympics, new world swimming records were set 25 times (affecting 21 distinct world records) and new Olympic swimming records were set 65 times and one other was equalled (affecting 30 distinct Olympic records).[4] Only Ian Thorpe's 3:40.59 in the 400 metres freestyle and Inge de Bruijn's 56.61 in the 100 metres butterfly both set in Sydney remain Olympic records. Michael Phelps of the United States also broke the record for the most gold medals ever won by an Olympian with a total of 14; 8 of which were won during the 2008 Summer Olympics - this is also a world record.

Also, at the 4×100 m freestyle relay final, anchor Jason Lezak swam the fastest 100 m split (46.06); however, this is not considered an official FINA record, as he did not swim the first leg.

Another big change to swimming occurred when Speedo launched the LZR Racer swim suits on February 13, 2008. The suits, developed by NASA and the Australian Institute of Sport,[5] were designed to repel water, allow oxygen to flow to the muscles, and hold the body in a more hydrodynamic position.[6] The suits had been proven to give the swimmer a lower time by 1.9 to 2.2%.[7] Due to the advantage provided by the suits, some swimmers complained about the fairness in its use, because some people used multiple swimsuits to improve buoyancy and compressing of body;[8] even the official blog for the National Collegiate Athletic Association pondered whether they were "technology doping" and what was the difference between gaining advantage from a swimsuit and gaining advantage from performance-enhancing drugs.[7] In response to these complaints, the International Swimming Federation (FINA) scheduled a meeting with Speedo to discuss the suits.[8] After the meeting, FINA dismissed the claims of cheating, and endorsed the suits for future swimming meets.[8] By August 14, 2008, 62 world records had been broken by swimmers wearing the LZR Racer.[9]