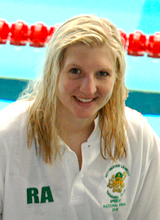 Adlington set a new British, Commonwealth, European and Olympic record of 8:18.06 in the preliminary heats of the women's 800 metre freestyle on . She went on to win the 800 m Olympic freestyle final on in a world record time of 8:14.10, her second gold of the tournament, a full six seconds ahead of the silver medalist, and two seconds ahead of the former world record which had been set by when Adlington was 6 months old. At the time, this was swimming's longest standing world record. [cite web |url=http://news.bbc.co.uk/sport1/hi/olympics/swimming/7564653.stm |title=Adlington storms to second gold |accessdate=2008-08-16 |publisher= |date=2008-08-16 ]

The Sherwood Swimming Baths in Adlington's hometown of , where she began swimming as a child, is to be renamed the "Rebecca Adlington Swimming Centre" when it is reopened after refurbishment in September 2009. [cite web |url=http://www.mansfield.gov.uk/index.aspx?articleid=2275 |title=Mansfield to honour Olympic hero |publisher=Mansfield District Council |date=2008-08-11 |accessdate=2008-09-05 ] The Yates Bar in Mansfield was renamed the "Adlington Arms" in her honour. [cite web |url=http://www.independent.co.uk/sport/olympics/news-and-features/adlington-arms-awaits-golden-girl-908619.htm |title=Adlington Arms awaits golden girl |publisher= |date=2008-08-26 |accessdate=2008-09-05]