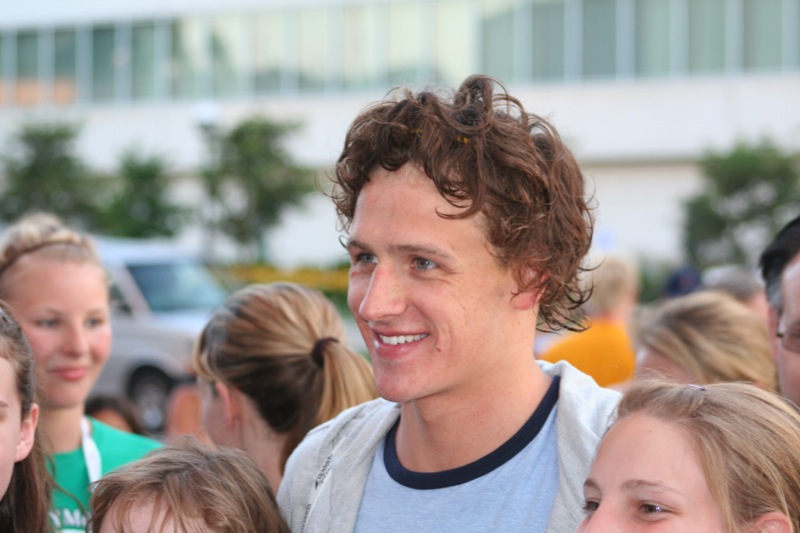 Lochte specializes in the backstroke and individual medley, but is also a freestyle relay swimmer. He is noted for the speed and distance he attains while kicking underwater.

He is a close rival and friends with in the individual medley events and in the backstroke races.

He graduated from the , where he swam for the University in NCAA competition. He currently lives and trains in . [cite web|url=http://results.beijing2008.cn/WRM/ENG/BIO/Athlete/3/221213.shtml|title=Athlete Biography: LOCHTE Ryan|accessdate=2008-08-21 ]

Lochte won swimmer of the meet for his senior year.

Other accomplishments in 2006 include breaking the 11-year old SEC record in the 100 butterfly previously held by . After finishing his fourth year of collegiate eligibility with the Gators, he was sponsored by along with and , thus turning professional.

Lochte made his Olympic debut after finishing second to Michael Phelps in the 200 m individual medley at the US trials. He also qualified for the 4x200 m freestyle relay team. At the Olympics, Lochte swam with Phelps, and to upset the Australian team and capture the gold medal in the 4x200 freestyle relay. He also narrowly edged out and in the 200 m individual medley to win the silver medal behind Phelps.

Later that year at the in , Lochte won the silver medal in the 200 m individual medley and the bronze in the freestyle. He also won the gold medal in the 4x200 m freestyle relay.

At the in , Canada, Lochte won the bronze medals in the 200 m backstroke and individual medley, and was a part of the 4x200 m freestyle relay team which set an American record and won the gold.

Just two weeks after the 2006 NCAA Championships, at the , Lochte won the world titles in the same events he won at the NCAA championships and set world records in the same events he for which he set American records. He won two individual events in the 200 m individual medley and the 200 m backstroke, setting new world records in both events. He also set another world record in the 100 m backstroke, in the opening leg of the 4x100 m medley relay, becoming the first man to complete the distance in under 50 seconds. He won a third gold medal in the 400 m individual medley, setting a new American record. He was named as the male swimmer of the meet by FINA.

At the in Melbourne, Australia, Lochte won his first individual gold medal at a long course world championship in the 200 m backstroke against American , breaking Peirsol's world record and his seven-year winning streak in the event. This was Lochte's his first world record in a long course event. Lochte went on to set a world record in the 4x200 freestyle relay with , , and . He also won silver medals in the 100 m backstroke, the 200 m IM, and the 400 m IM, making his medal total for the meet second to only Phelps.

Within a week of the world championships, Lochte competed in the annual Mutual of Omaha Duel in the pool where he again beat Piersol. In the 100 meter backstroke, he beat Peirsol's other seven-year winning streak in the shorter of the backstroke races, edging out Peirsol by .06 seconds.

On June 29, 2008, at the Olympic Trials, both Lochte and Michael Phelps broke the previous World Record. Phelps, by virtue of winning the race, set the new World Record. Lochte qualified for the 200m backstroke and 200m IM at the . At the 2008 Summer Olympics, he won the bronze medal in the 400m IM event, with Phelps grabbing the gold in a world record time. On August 14, 2008, Lochte won the gold medal in the 200 meter backstroke, while simultaneously beating the world record.