Mission Hill (formerly known as The Downtowners) is an American animated television series that first aired on The WB in 1999. Although 18 episodes were planned, only 13 episodes were produced. The show was put on hiatus by the WB Network after two episodes due to poor ratings. It returned to the WB in the summer of 2000 but was canceled after four additional episodes. The show went on to develop a cult following, thanks to repeated airings of all 13 episodes on Teletoon's "Teletoon Unleashed" block, Cartoon Network's popular late night programing block, Adult Swim and Too Funny To Sleep, a late night programing block on TBS. Mission Hill was formerly known as The Downtowners, although MTV's production of the similarly titled Downtown forced a name change.

It has also been popular outside of the United States and Canada, receiving broadcasts in Australia, Eastern Europe, Latin America, Spain and New Zealand. Stylistically, the series is recognizable for its bright, neon color palette, and features a peculiar mixture of modern animation and traditional "cartoonish" drawings (dashed lines coming from eyes to indicate line of vision, red bolts of lightning around a spot in pain).

Thirteen episodes of the show were produced while five more were written, but never completed. Animatics for some of these episodes were in production at the time of the show's cancellation. It was planned to put these animatics on the DVD for the series, but this never came to fruition. However, several of the animatics—including a completed video animatic and synchronized audio read-through of the episode "Pretty in Pink (Crap Gets in Your Eyes)"—have been released through various internet outlets.

The show takes place in a district called Mission Hill. Mission Hill is a diverse neighborhood in a much larger city called Cosmopolis. Cosmopolis is depicted as a large modern urban metropolis. The official website states Mission Hill is a mix of Mission District, in San Francisco, Silver Lake in Los Angeles, Wicker Park in Chicago, and Williamsburg in Brooklyn. The exact location of Cosmopolis has never been revealed, as it is a mix of East and West Coast cities. Most of the series takes place in the neighborhood of Mission Hill, although the skyscrapers of Downtown Cosmopolis are seen in the background. In the DVD commentaries, Josh Weinstein says that a large portion of the development of the show was spent developing Mission Hill into a functional, albeit fictional, city. Writers and animators worked together to create fictional advertisements, bands, foods, and even bus schedules.

Mission Hill received the 2000 Pulcinella Award for "Best Series for All Audiences"; the award cited the show's "stylized design and honest approach to sexual and moral issues."

The show won an award from GLAAD for its positive portrayal of a gay relationship. 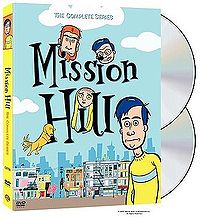