The Barbarian Football Club, usually referred to as the Barbarians and nicknamed the "Baa-Baas", is an invitational rugby union team based in Britain. The Barbarians play in traditional black and white hoops, though players retain the socks from their "home" club strip.

Membership is by invitation and the only qualifications considered when issuing an invitation are that the player's rugby is of a high enough standard and secondly that he should behave himself on and off the field. Being asked to become a Barbarian is an honour and not one restricted to British players; in addition to all four of the Home Nations, players from 27 other countries have worn Barbarian colours.[1] Traditionally at least one uncapped player is selected for each match.

The Barbarians traditionally played six annual encounters, Penarth, Cardiff, Swansea and Newport during their Easter Tour; a Boxing Day game with Leicester and the Mobbs Memorial Match against East Midlands in the spring. In 1948, the Barbarians were invited to face Australia as part of that team's tour of Britain, Ireland and France. Although initially designed as a fund raiser towards the end of the tour, the encounter became a popular fixture for most touring nations to Britain, and a Barbarian tradition.

On 29 May 2011, during halftime of the Barbarians' match against England at Twickenham, the Barbarians and their founder William Percy Carpmael were honoured for their unique contributions to the sport with induction to the IRB Hall of Fame.[2]

The Barbarian Football Club should not be confused with the Barbarian Rugby Club, also known as the French Barbarians, one of many invitational clubs based on Barbarian F.C. around the world.

The Barbarian Club was formed by William Percy Carpmael, who had played rugby for Cambridge University,[3] and had been part of the Cambridge team which had undertaken a tour of Yorkshire in 1884.[4] Inspired by the culture behind short rugby tours he organised his first tour in 1889 with Clapham Rovers,[4] which was followed by an 1890 tour with an invitational team calling themselves the Southern Nomads.[5] At the time practically every club ceased playing in early March and there were no tours and players just 'packed up' until the following season. In 1890 he took the Southern Nomads – mainly composed of players from Blackheath – on a tour of some northern counties of England.

His idea – collecting a touring side from all sources to tackle a few leading clubs in the land – received strong support from leading players, particularly ex-university players. On 9 April 1890 in Leuchters Restaurant at the Alexandra hotel in Bradford, the concept of the Barbarians was agreed upon.[6] The team toured later that year and beat Hartlepool Rovers 9 – 4 on 27 December in their first fixture.

The team was given the motto by Walter Julius Carey, former Bishop of Bloemfontein and a former member of the Barbarians:[7]

Rugby Football is a game for gentlemen in all classes, but for no bad sportsman in any class. 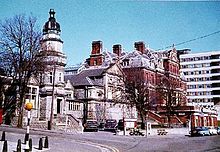 The now demolished Esplanade Hotel, photographed in 1970 and seen here just on the other side of the Penarth swimming pool and baths. "The Esp", as it was known, was the spiritual home and headquarters of the Barbarians Football Club for over 75 years

The concept took hold over the years and the nearest thing to a club home came to be the Esplanade Hotel, Penarth in South Wales, where the Barbarians always stayed on their Easter tours of Wales.[8] The annual Good Friday games against the Barbarians was the highlight of the Penarth club's year and were always attended by enthusiastic capacity crowds. This fixture marked the start of the "Baa-Baas" annual South Wales tour from their "spiritual home" of Penarth, which also encompassed playing Cardiff RFC on the Saturday, Swansea RFC on Easter Monday and Newport RFC on the Tuesday.

The non-match day of Easter Sunday would always see the Barbarians playing golf at the Glamorganshire Golf Club,[9] in Penarth, while the former Esplanade Hotel, that was located on the seafront at Penarth would host the gala party for the trip, sponsored by the Penarth RFC club. The first match took place in 1901,[8] and over the next 75 encounters, Penarth won eleven games, drew four and lost 60. Between 1920 and the first Athletics Field game in 1925 the Good Friday games were hosted on Penarth County Grammar School's sports field.

The final Penarth v Barbarians game was played in 1986 by which time the Penarth club had slipped from its former prominent position in Welsh rugby. However, a special commemorative game, recognising the 100 years since the first Good Friday match, took place in 2001 and was played at the Athletic Field next to the Penarth clubhouse the day before the Barbarians played Wales at the Millennium Stadium. Gary Teichmann captain of both the South African International squad and the Barbarians, unveiled a plaque at the clubhouse to mark the event.

After the Second World War in 1948 the Barbarians were asked by the Home Unions to raise a side to play the touring Australian side. This started the tradition of the Final Challenge – played as the last match in a tour of Britain and Ireland by Australia, New Zealand and South Africa.

That game, that try

The Barbarian Final Challenge match with the All Blacks at Cardiff Arms Park on January 27, 1973 is celebrated as one of the best games of rugby union ever played. It was a game of attack and counter attack.

Kirkpatrick to Williams. This is great stuff! Phil Bennett covering chased by Alistair Scown. Brilliant, oh, that's brilliant! John Williams, Bryan Williams. Pullin. John Dawes, great dummy. To David, Tom David, the half-way line! Brilliant by Quinnell! This is Gareth Edwards! A dramatic start! What a score!!.....Oh that fellow Edwards....If the greatest writer of the written word would've written that story no-one would have believed it. That really was something.[10]

Gareth Edwards said of the match:

The office was first instituted in 1913:

The nature of the Barbarians as a touring side made for a diverse fixture list, but at a number of points in the club's history they have settled for a time into a regular pattern. Some of these regular matches have fallen by the wayside, whilst others continue to the present day:

They typically compete against teams from the home nations (England, Wales, Scotland and Ireland) as well as other international sides.

Australia was approached by the British Olympic Association to play the Barbarians at Wembley Stadium on 3 December 2008. The match formed part of the BOA's programme of events to celebrate the centenary of the first London Olympic Games where Australia defeated a Great Britain (Cornwall) side in the final 32 – 3.[12] In 1908 France were the defending Olympic champions but when they withdrew from the event, leaving just Australia and Great Britain to contest the gold medal, it was then County champions Cornwall who took to the field to represent the host nation. Cornwall had already been defeated in Australia's earlier 31-match tour. The contribution of Cornwall 1908 contribution was also further recognised by the presentation of the Cornwall Cup to the winning captain at Wembley, with the players of the respective sides receiving gold or silver commemorative medals. The game was the first rugby union fixture to take place in the new Wembley Stadium, the old stadium having been last used for Wales' last gasp 32–31 victory over England in the then Five Nations in 1999.[13] Australia went on to win 18 points to 11.

In a change to the tradition of the Barbarians players wearing their own club socks, in this game, they all wore Cornwall's black and gold socks. The break with the tradition was highly regarded by the secretary of the Cornwall Rugby Football Union, Alan Mitchell, who was said to have been humbled by the honour.[13]

Barbarians squad for their match on 26th November against Australia .[17]

Note: Flags indicate national union as has been defined under IRB eligibility rules. Players may hold more than one non-IRB nationality.

The 16 players chosen by the Barbarians official website as the outstanding players to represent the club.[18]