The Honda Civic Hybrid is a hybrid powertrain version of the Honda Civic, first introduced in Japan near the end of 2001. It comes with either a continuously variable automatic transmission or (until 2005) a 5-speed manual transmission. It uses an Integrated Motor Assist hybrid system similar to Honda Insight. The Civic Hybrid is only available as sedan, even in Europe until 2012, where it is replaced by its hatchback version.[citation needed]

The Civic hybrid was introduced to the U.S. in spring 2002 as a 2003 model, based on the seventh generation Civic. As with the conventional Civic, it received a styling update for 2004. It is the first hybrid vehicle to be certified as an Advanced Technology Partial Zero- Emissions Vehicle (AT-PZEV) from California's Air Resources Board. The second generation Civic Hybrid is based on the eighth generation Civic, with some styling differences between the U.S. market and Japanese market models. The Civic hybrid ranks as the second best selling electric hybrid car in the U.S.[1] As of the end of January 2009, the total global sales of all Civic hybrid exceeded 255,000.[2]

The Civic hybrid, based on the seventh generation Civic, was first introduced to the Japanese market in December 2001. Honda claimed it was the most fuel efficient 5-passenger gasoline-powered production vehicle in the world at the time.[3] It was introduced to the U.S. in spring 2002 as a 2003 model. It is the first hybrid vehicle to be certified as an Advanced Technology Partial Zero- Emissions Vehicle (AT-PZEV) from California's Air Resources Board.[4]

The first generation of the Honda Civic Hybrid was based on the seventh generation Honda Civic. It was the first mainstream vehicle from Honda equipped with a gasoline-electric hybrid system and became the second hybrid model of the company after Insight. Model with manual transmission was rated 46 mpg city / 51 mpg highway according to United States Environmental Protection Agency (EPA) fuel mileage estimates,[5] about the same combined mileage as for the Toyota Prius, and became the most fuel-efficient five-passenger sedan ever sold in North America at the time.[6] 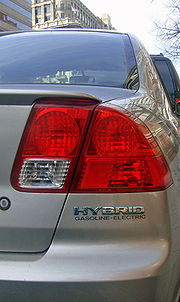 An electric motor is sandwiched between the gasoline engine and the transmission, providing up to 13 horsepower. The motor also acts as a generator, to recharge the car's nickel-metal hydride battery located between the rear seat and the trunk, and as a starter motor.

The motor in Civic hybrid is about a quarter-inch thicker than that of the Insight. Through improvements to the magnetic coils of the DC brushless motor, it achieves 30 percent greater assisting and regenerative torque than the previous model without increasing the size.

It generates more torque (46 versus 36 pound-feet) than the motor in Insight. The electricity is stored in a battery consisting of 120 1.2-volt Ni-MH D-cells wired in series. The battery can charge and discharge more rapidly and efficiently though the total capacity is reduced from the Insight's (6.0 versus 6.5 AH). Efficiency of the battery modules is increased, through a reduction in energy losses. The battery is housed with the electrical controller in a package called the Intelligent Power Unit (IPU). The new packaging reduces the size of the system by 50 percent and allowed to place the IMA equipment behind the rear seat in the trunk. The unit weighs only 63 pounds and is one-third smaller than that of the Insight.

The two spark plugs in each cylinder can fire either sequentially or simultaneously, enabling more efficient burning during lean-burn mode and more often lean-burn operation. The engine can operate at a lean 22:1 air-to-fuel ratio more than 60 percent of the time on a flat road. The VTEC cylinder idling system of the engine closes the valves in three of the four cylinders when the car is decelerating, reduces the power lost to the engine by 50 percent and allows the IMA to extract more electrical energy during braking. The rocker arms operating the intake and exhaust valves have two modes: valve-lift mode or idle mode. They are engaged via a synchronizing piston. During deceleration, the synchro piston disengages the lift-mode rocker arm so that the valves remain at rest, effectively sealing off the cylinder.

An idle stop feature shuts off the engine automatically when stopped, then restarts immediately when the driver removes their foot from the brake. This auto idle stop system contributes to both greater fuel efficiency and lower emissions. During stop and go driving, the engine will turn off when the car comes to a stop for the first time, however, if the car does not go above 10 mph and stops again, the engine will not turn off unless the car is stopped for more than 15 seconds.[10]

With assistance from the electric motor, the combined torque at below 3,700 rpm is greater than that available from the non-hybrid Civic's 1.7-liter engine.

Fuel efficiency further improved by six percent by utilizing: a new front air dam and rear spoiler, along with revised underbody panels, reducing the drag coefficient from 0.30 to 0.28; replacing traditional power steering with electrical power result as reduction in parasitic losses and special lower rolling resistance tires. The Dunlop tires improves ride quality and reduces road noise compared with other hybrids like Insight and Prius. When compared with Insight, a wider tire improves stability at highway speed. Car and Driver reported that the car can accelerate 0-60 mph in 10.9 seconds.

The Civic hybrid is estimated to be 40 percent more fuel efficient than its non-hybrid counterpart[11]. In reality, a very low consumption as specified can be reached by very moderate acceleration, keeping the engine speed below 2000 rpm, and avoiding speeds above 50 mph. Driving at higher speeds or uphill will increase fuel consumption.

The second generation Civic Hybrid is based on the eighth generation Civic. As with other Civics, there are some styling differences between the North American and the Japanese market models.[citation needed]

The powertrain of the second generation Civic hybrid is similar to that of the first generation.

By using high-performance magnets and high-density windings, Honda is able to increase the power output of the electric motor by 50% to 20 hp at 2,000 rpm when compared with the first generation. The inverter that controls motor speed is integrated with the motor's ECU for more precise control, resulting in greater efficiency and fuel economy. The output of battery is increased by around 30 percent to 158.4 V. The battery storage box is designed for better cooling performance and vibration resistance to enhance long-term reliability. The higher output of electric motor enables the car to run on electricity only, at a steady 15 to 20 mph when cruising on a flat surface. 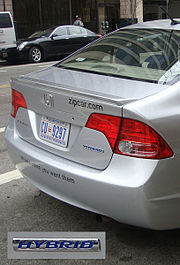 An internal electric motor is added to the air-conditioner, so it can be powered by either the engine, an electric motor, or both. At a stop, the compressor powered by the battery keeps the cabin cool. An additional compressor that is powered by the petrol engine also engages if rapid cooling is required. When the interior temperature is stable, air conditioning is provided by the battery solely. As soon as the brake pedal is lifted, the petrol engine comes back to life again.

The new three stage i-VTEC valvetrain has low-rpm, high-rpm and cylinder idle mode. High output valve timing help the engine to increase its output by 9 percent. During deceleration, the engine is kept idle. There are no combustion in all four cylinders and the cylinders are sealed shut, reducing pumping losses by engine. As a result, recovery of energy wasted during braking is improved by 10 percent.

Car and Driver found the car, when compared with previous generation, faster, offered greater refinement, quieter at highway speed, has a stiffer body and a revised suspension that handles bumps better and quietly.

The Civic hybrid ranks as the second best selling electric hybrid car in the U.S.[1]

Consumer Reports ran an article in April 2006 stating that hybrid vehicles would not pay for themselves over 5 years of ownership. However, there was an error in the calculation of depreciation for the hybrid vehicles. It resulted in overstating how much extra money the hybrids would cost their owners during the first five years of ownership.[16] When corrected, the Honda Civic Hybrid did have a payback period of slightly less than 5 years.[17] In October 2010 Vincentric performed a hybrid cost of ownership analysis for USA market. In this analysis it compared hybrid's 5 year cost of ownership to their all gas counterparts. The analysis showed that 2010 Honda Civic Hybrid costs an additional $1830 dollars over a 2010 Honda Civic EX 2D Coupe with an Automatic Transmission (the report assume 15,000 miles are driven annually and fuel prices are based on a weighted average over the five months prior to October 2010).[18][dead link] 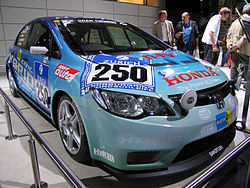 Honda Civic Hybrid has competed in 24 Hours Nürburgring in 2007, finished in 108th. The twenty-four hours race around the Nürburgring, one of the world's most grueling courses. To race successfully in that course is considered a testament to the capability of Civic's hybrid powertrain.[22]

It comes with improved aerodynamics and Honda ECO Assist technology.[26] The ECO Assist technology is an information system to help the driver adopt a more fuel-efficient driving style,[27] and is proven to improve fuel economy by about 10% for Honda's hybrid vehicles in Japan.[28]

The hatchback version of the Civic Hybrid is under the development, said to be released in 2011 or 2012 to replace its sedan version, which is very unpopular in Europe.[29]