UTM was built on the former estate of Reginald Watkins, which was acquired by the University of Toronto in 1965. Founded as Erindale College in 1965, construction on the university's main building began in 1966. Although originally expected to be temporary, the building still exists today as part of the North Building. In 1998, Erindale assumed the dual name of University of Toronto Mississauga, although Erindale College still remains an official alternate name[3][4][5][6]

Recently UTM celebrated its 40th anniversary, a milestone which was capped off with the grand opening of the Hazel McCallion Academic Learning Center on June 2, 2007.[3]

The campus consists of a number of buildings arranged across a large, treed lot. The surrounding suburban neighbourhood (the Mississauga Road area and the Credit Woodlands) is a fairly affluent section of the city of Mississauga. The largest building was built as a megalithic structure, predominantly out of concrete, as was typical of the brutalist architecture style of the late 1960s. It was one of architect Raymond Moriyama's first major commissions. Other buildings were added over the decades, but, with the enlarged enrollment at the beginning of the new millennium, the pace of construction increased.

A new CCT (formerly CCIT) building, designed by Saucier + Perrot, was opened in September 2004. It is characterized by a poorly finished black and glass exterior. The interior is finished in concrete and gray paint, with black plastic melamine on many surfaces. The new library and academic learning centre, designed by Shore Tilbe Irwin + Partners and named after Mississauga's mayor, Hazel McCallion, opened October 8, 2006, and the new Wellness, Recreation and Athletics Centre, also by Shore Tilbe, opened less than a month previous to that. The new library consists of four floors with a mixture of group study tables and individual silent study space.

Mississauga campus became home to a first in Canadian education. Canada's first Forensic Science Institute was created at the U of T Mississauga, opening for the 2007 - 2008 school year. The new institute for postgraduate students forges close ties with the Centre of Forensic Sciences. Plans have also been finalized for the establishment of an Academy of Medicine at the Mississauga campus, in partnership with the University of Toronto Faculty of Medicine.[7] It will provide a community oriented program to increase the number of primary care physicians and general practitioners. The first students are slated for enrollment in 2011. U of T Mississauga is in the midst of an expansion, with student enrollment being projected to reach 12,000 by the end of the decade. 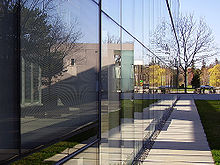 U of T Mississauga students can apply for joint-degree programs in CCIT, art and art history or theatre and drama through an arrangement with Sheridan College, allowing students to obtain both a university degree from U of T and a college diploma from Sheridan. The CCIT program is a recent creation and partnership between U of T Mississauga and Sheridan College. These programs allow students to benefit from the practical experience of a college.[9]

Other undergraduate programs offered at U of T Mississauga include, but are not limited to professional writing and communication, economics, mathematics, chemistry, languages, physics, environmental sciences, geography, and earth sciences (e.x. geology).

U of T Mississauga also hosts one of the few palaeomagnetism laboratories in Canada. Currently run by Dr. Henry Halls, this lab investigated the palaeomagnetic properties of rocks collected from the Apollo missions in the 1970s. U of T Mississauga's most famous president was Dr. J. Tuzo Wilson, a geologist and pioneer in plate tectonics. A research wing in the William G. Davis building of U of T Mississauga is named after him.[3]

The campus is home to CFRE-FM, broadcasting twenty-four hours a day at 91.9FM out of the Student Centre. With a focus on Canadian and independent music, students and community members are encouraged to apply for a show, as no experience is required. The main practice facility of the Toronto Argonauts football club is also located on campus.[10] The Multimedia Studio Theatre at UTM is often used as a venue for visiting professors and performances by artists as well as for student performances. Theatre Erindale presents a regular 5 show season every year as well as sponsoring Independent Student Productions.[11] Both theatres also host UTM's Drama club performances.

Theatre Erindale is a theatre production company at UTM. It is part of the Theatre and Drama Studies program. The company presents a season of 5 plays in the Erindale Studio Theatre.[12] These plays include classics, modern pieces and a yearly collective developed by the third year class. Several shows have been included in the Ontario Arts Review Top 10 List since 2005.[13]

The season's shows are also supported by the students of the Theatre Arts-Technical Production Program of Sheridan College who work in positions such as Stage management, Lighting operation, and Sound operation.

In addition to the regular season, Theatre Erindale sponsors one or more Independent Student Productions during the school year. The Department of English & Drama at UTM also runs an active drama club that performs both at the Mississauga campus and also at the University of Toronto Drama festival at Hart House Theatre. Many of these events that are outside of the regular season plays are presented in the MiST Theatre.

MiST was designed as a modern, flexible theatre space.[14] The theatre is contained in the CCT building designed by Saucier + Perrotte Architectes.[15] Although MiST is an English & Drama departmental space, it is used by many different members of the UTM community.[16] It can also be rented by non-university groups.

The MiST Theatre is affiliated with the Theatre & Drama Studies Program and their performance company Theatre Erindale. The TDS program also uses the other University of Toronto Mississauga performance space, Erindale Studio Theatre.

Everything inside of MiST is modular, or on wheels. There are drapery tracks that encircle the room allowing the various drapes to be moved to any location. The theatre also has 6 moving lights that allow quick and easy placement of lighting specials. The theatre is often used for everything from modern multimedia performances to traditional dance.

Generally MiST has 148 seats set up, but the capacity is often increased for lecture style events.

MiST has also often been used as a venue for visiting professors and artists. The Blackwood Gallery on campus has used MiST on several occasions for receptions, conferences, and art exhibits.[17]

Erindale Studio Theatre is a Black Box type space that has an audience capacity of up to 85, depending on the stage configuration. The building itself was formerly a bus garage and science lab, but was converted into a theatre in 1993.

The stage space can be set up as proscenium style, thrust, theatre-in-the-round, alley, or corner-to-corner. In its various configurations it has played host of a wide range of performances:

As well as being used by the UTM Theatre and Drama Studies program, Erindale Studio Theatre is often used by rental groups. It has a modern lighting and audio system, as well as a full carpentry shop, costume shop, Box office and painting facilities.

Students who contribute much to student life are recognized through various awards including the Gordon Cressy Student Leadership Award[18] and the UTM Principal's Student Involvement Award.[19]