Yttrium barium copper oxide, often abbreviated YBCO, is a crystalline chemical compound with the formula YBa2Cu3O7. This material, a famous "high-temperature superconductor", achieved prominence because it was the first material to achieve superconductivity above the boiling point (77 K) of liquid nitrogen.

In April 1986 (seventy-five years after the discovery of superconductivity in 1911), Georg Bednorz and Karl Müller, working at IBM in Zurich, discovered that certain semiconducting oxides became superconducting at 35 K, then considered a relatively high temperature. In particular, the lanthanum barium copper oxides, an oxygen deficient perovskite-related material, proved promising. In 1987, Bednorz and Müller were jointly awarded the Nobel Prize in Physics for this work.

Building on that, Maw-Kuen Wu and his graduate students, Ashburn and Torng[3] at the University of Alabama in Huntsville in 1987, and Paul Chu and his students at the University of Houston in 1987 (see superconductor page for info), discovered YBCO has a Tc of 93 K. (The first samples were Y1.2Ba0.8CuO4.) Their work led to a rapid succession of new high temperature superconducting materials, ushering in a new era in material science and chemistry.

YBCO was the first material to become superconducting above 77 K, the boiling point of liquid nitrogen. All materials developed before 1986 became superconducting only at temperatures near the boiling points of liquid helium (Tb = 4.2 K) or liquid hydrogen (Tb = 20.28 K) — the highest being Nb3Ge at 23 K. The significance of the discovery of YBCO is the much lower cost of the refrigerant used to cool the material to below the critical temperature.

Relatively pure YBCO was first synthesized by heating a mixture of the metal carbonates at temperatures between 1000 to 1300 K.[4][5]

Modern syntheses of YBCO use the corresponding oxides and nitrates.[5]

The superconducting properties of YBa2Cu3O7−x are sensitive to the value of x, its oxygen content. Only those materials with 0 ≤ x ≤ 0.65 are superconducting below Tc, and when x ~ 0.07 the material superconducts at the highest temperature of 95 K,[5] or in highest magnetic fields: 120 T for B perpendicular and 250 T for B parallel to the CuO2 planes.[6]

In addition to being sensitive to the stoichiometry of oxygen, the properties of YBCO are influenced by the crystallization methods used. Care must be taken to sinter YBCO. YBCO is a crystalline material, and the best superconductive properties are obtained when crystal grain boundaries are aligned by careful control of annealing and quenching temperature rates.

Numerous other methods to synthesize YBCO have developed since its discovery by Wu and his coworkers, such as chemical vapor deposition (CVD),[4][5] sol-gel,[7] and aerosol[8] methods. These alternative methods, however, still require careful sintering to produce a quality product.

However, new possibilities have been opened since the discovery that trifluoroacetic acid (TFA), a source of fluorine, prevents the formation of the undesired barium carbonate (BaCO3). Routes such as CSD (chemical solution deposition) have opened a wide range of possibilities, particularly in the preparation of long length YBCO tapes.[9] This route lowers the temperature necessary to get the correct phase to around 700 °C. This, and the lack of dependence on vacuum, makes this method a very promising way to get scalable YBCO tapes. 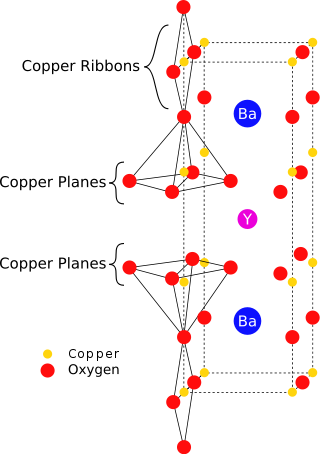 YBCO crystallises in a defect perovskite structure consisting of layers. The boundary of each layer is defined by planes of square planar CuO4 units sharing 4 vertices. The planes can some times be slightly puckered.[4] Perpendicular to these CuO2 planes are CuO4 ribbons sharing 2 vertices. The yttrium atoms are found between the CuO2 planes, while the barium atoms are found between the CuO4 ribbons and the CuO2 planes. This structural feature is illustrated in the figure to the right.

Although YBa2Cu3O7 is a well-defined chemical compound with a specific structure and stoichiometry, materials with less than seven oxygen atoms per formula unit are non-stoichiometric compounds. The structure of these materials depends on the oxygen content. This non-stoichiometry is denoted by the YBa2Cu3O7-x in the chemical formula. When x = 1, the O(1) sites in the Cu(1) layer are vacant and the structure is tetragonal. The tetragonal form of YBCO is insulating and does not superconduct. Increasing the oxygen content slightly causes more of the O(1) sites to become occupied. For x < 0.65, Cu-O chains along the b axis of the crystal are formed. Elongation of the b axis changes the structure to orthorhombic, with lattice parameters of a = 3.82, b = 3.89, and c = 11.68 Å. Optimum superconducting properties occur when x ~ 0.07, i.e., almost all of the O(1) sites are occupied, with few vacancies.

In experiments where other elements are substituted at the Cu and Ba sites evidence has shown that conduction occurs in the Cu(2)O planes while the Cu(1)O(1) chains act as charge reservoirs, which provide carriers to the CuO planes. However, this model fails to address superconductivity in the homologue Pr123 (praseodymium instead of yttrium).[10] This (conduction in the copper planes) confines conductivity to the a-b planes and a large anisotropy in transport properties is observed. Along the c axis, normal conductivity is 10 times smaller than in the a-b plane. For other cuprates in the same general class, the anisotropy is even greater and inter-plane transport is highly restricted.

Furthermore, the superconducting length scales show similar anisotropy, in both penetration depth (λab ≈ 150 nm, λc ≈ 800 nm) and coherence length, (ξab ≈ 2 nm, ξc ≈ 0.4 nm). Although the coherence length in the a-b plane is 5 times greater than that along the c axis it is quite small compared to classic superconductors such as niobium (where ξ ≈ 40 nm). This modest coherence length means that the superconducting state is more susceptible to local disruptions from interfaces or defects on the order of a single unit cell, such as the boundary between twinned crystal domains. This sensitivity to small defects complicates fabricating devices with YBCO, and the material is also sensitive to degradation from humidity.

It is a Type-II superconductor.

The upper critical field is 120 T for B perpendicular and 250 T for B parallel to the CuO2 planes.

Bulk properties depend greatly on the manner of synthesis and treatment because of the effect on crystal size, alignment, and density and type of lattice defects.

"The implementation of thin-film YBCO receiver coils has improved the signal-to-noise ratio of nuclear magnetic resonance (NMR) spectrometers by a factor of 3 compared to that achievable with conventional coils."[11]

YBCO has yet to be used in many applications involving superconductors for two primary reasons:

It should be noted that cooling materials to liquid nitrogen temperature (77 K) is often not practical on a large scale, although many commercial magnets are routinely cooled to liquid helium temperatures (4.2 K).

The most promising method developed to utilize this material involves deposition of YBCO on flexible metal tapes coated with buffering metal oxides. This is known as coated conductor. Texture (crystal plane alignment) can be introduced into the metal tape itself (the RABiTS process) or a textured ceramic buffer layer can be deposited, with the aid of an ion beam, on an untextured alloy substrate (the IBAD process). Subsequent oxide layers prevent diffusion of the metal from the tape into the superconductor while transferring the template for texturing the superconducting layer. Novel variants on CVD, PVD, and solution deposition techniques are used to produce long lengths of the final YBCO layer at high rates. Companies pursuing these processes include American Superconductor, Superpower (a division of Intermagnetics General Corp), Sumitomo, Fujikura, Nexans Superconductors, and European Advanced Superconductors. A much larger number of research institutes have also produced YBCO tape by these methods.

These molecular layered materials are synthesized using cyclic voltammetry. Thus far, YBCO layered with alkylamines, arylamines, and thiols have been produced with varying stability of the molecular layer. It has been proposed that amines act as Lewis bases and bind to Lewis acidic Cu surface sites in YBa2Cu3O7 to form stable coordination bonds.

Like all superconductors, YBCO displays the Meissner effect (however, this effect is NOT being demonstrated here). Below its critical temperature, YBCO becomes perfectly diamagnetic and excludes sufficiently weak magnetic fields from passing through it.[4]