The North East MRT Line (NEL) is the third Mass Rapid Transit line in Singapore and the world's second longest fully underground, automated and driverless, rapid transit line after Singapore's Circle MRT Line.[1] The line is 20 km long with 16 stations and operated by SBS Transit. Travelling from one end of this line to the other end takes 32 minutes.[2] This line is coloured purple in the rail map.

As the name implies, the line connects central Singapore to the north-eastern part of the island. Transfer to the North South Line is provided at Dhoby Ghaut station, East West Line at Outram Park station and Circle Line at Serangoon, Dhoby Ghaut and HarbourFront stations. The future Downtown Line will interchange with the North East Line at Chinatown and Little India stations. This line is the first in Singapore to be entirely underground.

The North East Line is the first line in Singapore to have artwork integrated into all its 16 stations under the Art in Transit programme. Other than the Art in Transit programme, the interior architecture for the stations are typical of the design of the early 2000s with lots of white, glass and steel.This kind of design can be seen in other subway stations built during this period like the Shenzhen Metro and Hong Kong MTR's Tseung Kwan O line. 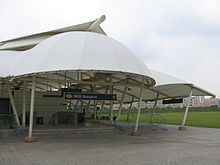 The Land Transport Authority received approval for the construction of the North East Line on 16 January 1996. French company Alstom was chosen as the main contractor and manager of the project. The operating license was given to new rail operator SBS Transit in order to foster competition with SMRT Corporation.

In the initial stages of planning, Outram Park Station was initially planned to be the southern terminus of the North East Line. However, in 1993, the Land Transport Authority decided to extend the line southwards to HarbourFront MRT Station, after noting that many people liked to go to the World Trade Centre (the present day HarbourFront Centre).

The line was scheduled for completion in 2002, but due to various problems in the automation, the opening was repeatedly delayed. It was finally opened on 20 June 2003, with higher fares than existing lines supposedly to compensate for the heavy construction costs (S$4.6 billion).

At the time that the line was opened, all of the stations were operating except Buangkok and Woodleigh. SBS Transit announced that these would open only when there was a critical mass of passengers in those areas. With respect to Buangkok, which had already been fully built, the company claimed that the projected number of passengers was too low to cover operating costs. Constant public pressure, notably the "White Elephant" incident and subsequent media attention, forced it to review the situation and the station duly opened on 15 January 2006. As expected, Buangkok station's first-week ridership was the lowest on the NEL and does not cover operating costs.[citation needed] The last station on the line, Woodleigh, opened on 20 June 2011 in anticipation of a American International School which is under construction in the vicinity of the station that is slated to open in 2012.[3]

The North-East Line's numbering scheme reserves station code "NE2" between HarbourFront (NE1) and Outram Park (NE3). As of 2009, the LTA has not announced any details of any future station here.

NE2 is supposedly to be called Keppel. 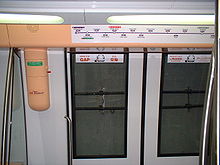 Doors of the NEL Train, showing the line map above them before Woodleigh opened on 20 June 2011. 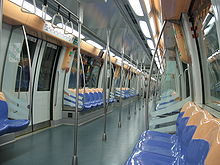 The interior of a NEL train. 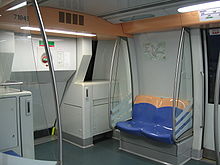 The front cabin of a NEL train, showing the emergency exit.

Despite some initial glitches when the driverless line first opened, it has operated more or less reliably, as compared to the Bukit Panjang driverless LRT run by competitor SMRT Corporation, which was fraught with repeated hiccups.

A software flaw on one of the first days of operation paralysed the trains for several hours. Another problem of trains stalling at stations repeatedly was traced to commuters accidentally pressing the Emergency Communication Button whenever they leaned on the train wall and rectified by placing plastic shields over the buttons.

The North East Line has also been criticised for charging higher fares than the rest of the system. Despite that, it had been operating at a loss until late 2006. After half a year of operation, ridership remained below expectations at an average of 170,000 passengers per day, short of the 250,000 per day needed to break even. At that time, SBS Transit estimated its losses for 2003 at S$40 million and was even rumoured to be considering selling the line to competitor SMRT Corporation, although both operators dismissed such speculation. However, the ridership has been slowly increasing and broke the break-even mark of 250,000 in late 2006. The North East Line operations has been turning in profits since.

On 24 July 2006, passengers on board a NEL train headed for HarbourFront were evacuated after it stalled in the tunnel due to a loss of traction power around 12:45 p.m.[4] The breakdown occurred when the overhead power lines in the tunnel were dislodged and disconnected after a faulty insulator supporting them gave way. Electricity was cut off from the train. It was reported that commuters in the tunnel saw sparks and heard a loud bang before the train halted. Passengers had to walk a distance of about 200m back to Outram Park Station as a result. 100,000 commuters were affected by the disruption for seven hours that day, with shuttle buses plying the affected sections of the line. An investigation was carried out during the period of ten months after the incident. The Land Transport Authority announced that operator SBS Transit will not be fined or penalised for the disruption, adding the fault was due to a faulty part and not negligence. Investigations pointed to the quality of the ceramic insulators made by Ceralep Sn. The LTA said Ceralep had examined all 251 insulators in stock and are free of defects. The LTA said the dislodged wires did not pose a danger to the passengers on the train, since a circuit breaker would have been tripped by the incident. In September 2006, another electrical fault disrupted train services for an hour. SBS Transit said the breakdown was due to a faulty electrical relay, a type of switch. The defective relay led to a replacement of about 200 relays made by Relais Electroniques Deutsch, a French corporation.[5] The latest disruption on the North East Line occurred on 21 April 2010. This appeared to be due to a door problem in Sengkang station. Passengers were advised that 'Trains were delayed until further notice' and to utilize alternate means of transport. Though train services resumed after 9:45, commuters complained it is still slow.[6]