Fares and ticketing on the Mass Rapid Transit (Singapore)

Fares and ticketing on the Mass Rapid Transit (Singapore)

Because the rail operators are government-assisted profit-based corporations, fares on Singapore's Mass Rapid Transit (MRT) system are currently aimed at least in breaking-even to at least compensate for their costs of running the system. The rail operators collect fares by selling electronic tickets capable of storing data, the price of which are calculated based on the distance between the start and destination stations. These prices increase in fixed stages for standard non-concessionary travel. From the information that was earlier written in these tickets, it is possible to increase the fare according to increments based on approximate distances between stations.

Stations on the MRT system are divided into two areas, paid and unpaid areas which allow the rail operators to collect needed fares by restricting entry only through the fare gates, also as access control gates. These gates, connected to a computer network, are capable to the electronic tickets, and can store information such as the amount of time taken per trip, and the start and destination stations per trip. This will thus allow the rail operators to collect fares based on this information.

The General Ticketing Machines (GTMs) at each station allow commuters to purchase value additions for their tickets or purchase tickets for single trips. Tickets for single trips, coloured in green, are valid only on the day of purchase, and have a time allowance of 30 minutes above the estimated travelling time between the destination and starting stations. Tickets that could be used repeatedly until its expiry date required a minimum amount of money in order to purchase both a new ticket or additional value.

It is possible for passengers to extend a trip mid-journey, and pay the difference as they exit their destination station. Using distance-based prices stands in contrast to utilising fare zones in some other subway systems such as the London Underground.

Although operated by private companies, the system's fare structure is regulated by the Public Transport Council, with the operators submitting requests for fare revision for approval. Fares are kept affordable by approximately pegging them to distance-related bus fares, thus encouraging commuters to utilise the network and move away from past heavy reliance on the bus system. Recent fare increases in the past few years have raised the ire of the public.[1] There were also similar expressions of disapproval over the slightly higher fares charged on SBS Transit's lines, a disparity which SBS Transit justified by citing higher operational and maintenance costs, and lower ridership.

The following fares apply after 1 July 2010.

Contactless smart cards replaced their magnetic ticket predecessors completely on 1 December 2002, making Singapore one of the first cities to implement contactless smart card payment on all the main modes of public transportation, along the likes of Hong Kong.

When the system first came into operation in 1987, fares on the Yio Chu Kang to Clementi ranged from S$0.50 to S$1.10 in S$0.10 increments for all adult tickets, regardless of whether they were single-trip or stored tickets. Several concessionary fares were available. Senior citizens and permanent residents above the age of 60 could travel on a flat fare S$0.50 during off-peak hours, namely from 10am to 4pm, and from 7pm onwards on weekdays, from 2.30pm onwards on Saturdays, and for the entire day on Sundays and public holidays. At all other times, standard adult fares were payable. Children below the height of 1.2 metres, and full time students studying in primary, secondary, Pre-university and VITB institutions can pay a flat fare of S$0.30 at any time of the day.

Magnetic strip plastic tickets were used, and came in various forms. The single trip ticket, coloured in green, has a validity on the day of purchase, as well as a time allowance of 30 minutes above the travelling time. Stored value tickets came in three values: The S$10 blue ticket for adults, the S$10 magenta tickets for senior citizens, and the S$5 red tickets for children. In addition, monthly concession tickets can also be purchased, and comes in four values: The beige coloured S$13 ticket for primary students, the peach coloured S$17 ticket for secondary, pre-university and VITB students, the pink coloured S$30 ticket for tertiary students, and the purple coloured S$36 ticket for full time national servicemen. These concession tickets have a validity of one month from the date of purchase, allows up to four trips per day, and are non transferable.

The EZ-Link Card enables residents & foreign visitors alike to travel freely on the MRT, LRT & Bus system without the need for multiple cards, saving them both time & effort as they no longer need to figure out which card to use for which system. Commuters travelling on the MRT & LRT system are also not hindered when transferring lines (which could be run by different operators), by the need to exit the faregates and re-enter through another in order to change lines. In general, once one has tapped the EZ-Link Card on the card readers and enters the MRT & LRT system, he or she never has to tap it again until he or she has arrived at the desired destination station.

Just released in 2007, the Singapore Tourist Pass, a variant of the EZ-Link Card, offers tourists an entire day's of unlimited travel at S$8.

This is not always true on other metro systems in the world, where a commuter may have to exit the faregates in order to transfer to another line or system. For example, in New York City, if a commuter on the New York City Subway system wishes to transfer to the Port Authority Trans-Hudson (PATH) metro system, he or she has to exit the faregates at a designated station on the New York City Subway and re-enter the faregates at the designated PATH station in order to make the transfer, and vice-versa, as there are no connections between the paid areas of both systems where the commuter can make the transfer. 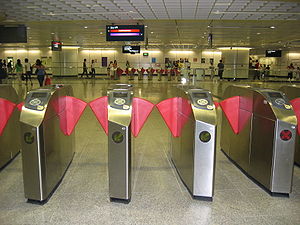 A row of Thales Gates at Dhoby Ghaut station.

These are the standard sized gates you would normally see at every station. Each gate features Sony and CEPAS contactless smart card readers and 2 central retractable flaps. They are also ergonomically designed & made of stainless steel. Furthermore, they also feature a 6.5 inch LCD/TFT monitor which is used to display information about the ticket used by the passenger passing through the gate, as well as LED displays which show the operating status of the gate (whether it is for entry or exit).

Currently on trial at Somerset, and now have been rolled out to Bishan and Newton, the fourth generation "Titan" gates will eventually replace the first and second generation gates that have been in use for over 20 years. These new gates will be 10% more energy efficient with low energy LED displays, LCD displays and servo-motors. The faregates are much smaller and wider compared to the two types of old gates. They will also be able to differentiate between human and inanimate objects, as there is no more green arrow and red cross signs, all of which replaced by illuminated bars. Red pin-holed sensors are removed, replaced by black plastic. It also makes low-buzzing sounds when there is error.

Each gate features contactless smart card readers capable of reading type A, B and FeliCa cards and 2 central retractable flaps. They are also ergonomically designed & made of stainless steel. Furthermore, they also feature a 6.5 inch LCD/TFT monitor which is used to display information about the ticket used by the passenger passing through the gate, as well as LED displays which show the operating status of the gate (whether it is for entry or exit). These gates were designed for passengers with bulky luggage, prams, in wheelchairs or those who are disabled to use. These gates are much wider than the standard ones & feature 2 double retractable flaps. There will always be at least 1 in every station. For Changi Airport Station, because it serves airport passengers who are likely to carry bulky hand luggage, all gates at this station are of the wide gate variety.

In the early years, single trip magnetic tickets were purchased at Ticket Vending Machines with coins only. Notes could be broken up into small change at a separate change machine. Those holding magnetic multi trip farecards could only reload their cards with additional credit at manual service counters or a separate Add Value Machine.

Today, the multi functional General Ticketing Machines have replaced their predecessors above for all of the passenger's ticketing needs. Through a touch screen monitor & a touch sensitive system map, these new generation of machines allow the passenger to reload the stored value in their EZ-Link Cards in cash (notes), through NETS & apply for automatic reload service through GIRO or VISA. Passengers can also purchase a Standard Ticket in cash (coins & notes), get a refund on their Standard Ticket deposit, check the value remaining in their EZ-Link Cards & view their past card transactions. 2 variations of the General Ticketing Machines are in use, differing only slightly in design as they are manufactured by different companies. 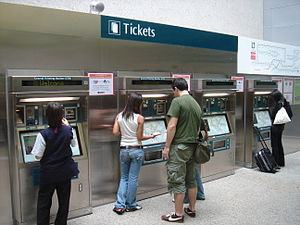 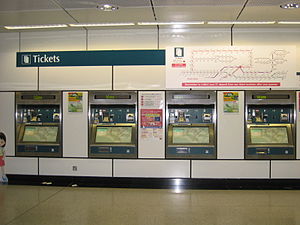