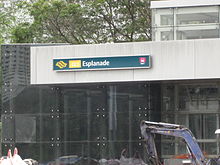 A display board of CC3 Esplanade station. 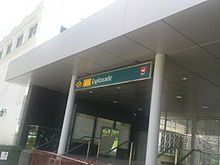 Esplanade MRT Station (CC3) is an underground Mass Rapid Transit station on the Circle Line in Singapore. The station was opened on 17 April 2010 along with the rest of Stage 1 & 2 of the Circle Line. It is operated by SMRT Corporation and is located next to the War Memorial Park, the Suntec City Mall and the Suntec Singapore International Convention and Exhibition Centre. The station also has a link to Raffles City, CityLink Mall, Suntec City Mall and Marina Square.

There is a link from Circle Line's Esplanade station to City Hall MRT Station via the underground shopping centre CityLink Mall or the basement of Raffles City shopping mall.

The underpass linking CityLink Mall and Suntec City Mall had been closed since 2003 to facilitate the construction of the station and pedestrians had to use a temporary covered overhead bridge to cross Raffles Boulevard.

The bridge underwent dismantling starting 12 May 2008.[1]

A black and white artwork by the late Lim Mu Hue which features shadow puppetry and other performances enjoyed by the early settlers of Singapore was recreated on a large wall and is located within the walkway within the station between Raffles City and Marina Square.